The following article is based on excerpts from the book The Measure of a Nation: How to Regain America's Competitive Edge and Boost Our Global Standing.

A key goal in Measure of a Nation is to compare the United States to other wealthy countries, with the idea being to identify which countries are performing the best in each area of interest: health, safety, democracy, education and equality. In each of those areas, the countries that are performing the best are examined to determine which best practices might be applied here in America. In order to do this analysis, we selected the subset of countries that are both wealthy (nominal GDP per capita over $20,000) and have a population greater than 10 million (upper third of national populations, no city-state countries) as a comparison group. This comparison group consists of 14 countries: Australia, Belgium, Canada, France, Germany, Greece, Italy, Japan, Portugal, The Netherlands, South Korea, Spain, the United Kingdom and the United States. 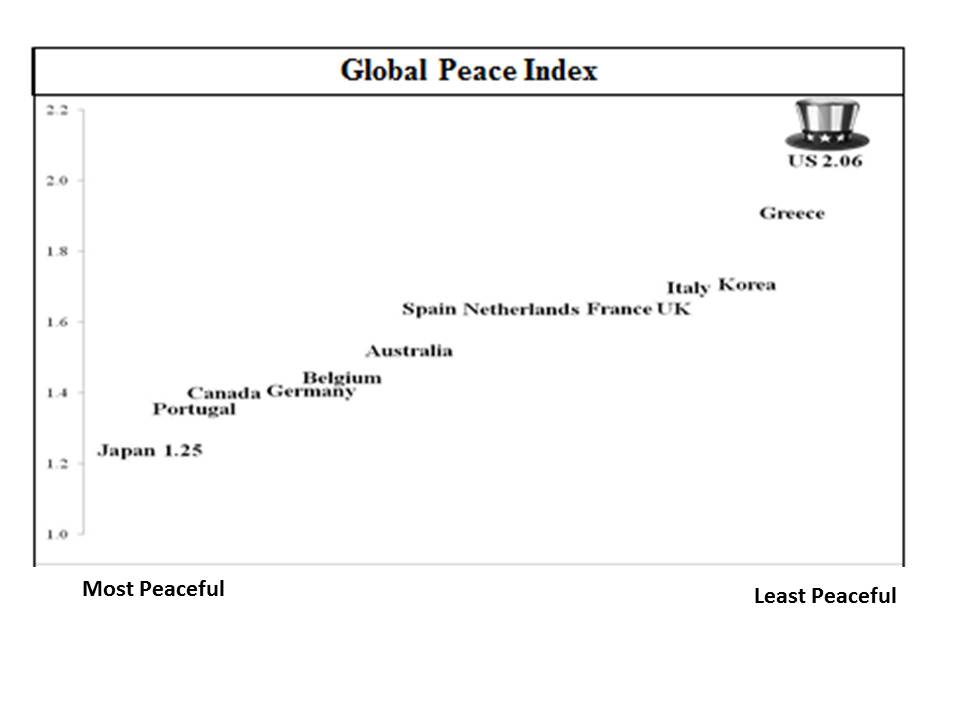 In the area of safety, Measure of a Nation examines a number of aspects of internal and external safety. This specific article discusses the Global Peace Index, a measure of how peaceful nations are in relation to one another. The index uses data from the International Institute of Strategic Studies, the World Bank, various UN offices and Peace Institutes and the Economist Intelligence Unit to measure a group of twenty-three indicators -- namely:

The Global Peace Index (GPI) rating is subjective in its weightings and selection of indicators, many of which are open to broad interpretations. It is instructive nevertheless that the United States rates worse (least peaceful) than any of the countries on our competitor list, while Japan rates the best (most peaceful). The major components in America's poor rating are its high incarceration rate, high potential for terrorist attacks, access to weapons and disrespect for human life.

Equally instructive is the index's breakdown of states within the United States. According to the GPI, the most peaceful states are Maine, New Hampshire, Vermont, Utah and Minnesota, while the least peaceful are Louisiana, Tennessee, Nevada, Florida and Arizona. These state-level rankings correlate closely with economic opportunities, education and health and are independent of the party in power in the separate statehouses and state legislatures. Incarceration and homicide rates in the most peaceful American states are roughly one-fifth the rates of the most dangerous states and are close to the rates found in the European competition.

It is ironic that Japan, one of the aggressors of World War II, has enjoyed under US protection an era of relatively minimal internal and external violence that has enabled it to reduce its military expenditures and to institute policies and laws that make it a safer place to live than the United States. Follow Howard Steven Friedman's Facebook Fan Page Note: Data for the GPI were extracted from Vision of Humanity, Global Peace Index: