On Saturday, April 28, in the shadow of the 60 Centre Street courthouse engraved with the words, "The true administration of justice is the firmest pillar of good government," a crowd of over 500 people assembled. It was a gathering that was part of a network of events taking place across the nation, put into play by Unitewomen.org.

Two women co-founded the grassroots organization. Karen Teegarden (Michigan) and Desiree Jordan (New York) connected online. They were alarmed by the rapid erosion of women's rights. The distance between their home states did not deter them from a motivation to do something. They created a Facebook page called United Against the War Against Women, with the theory if they built it women would come.

I was able to interview Jordan about the demonstration she had spearheaded. It "began" for her on February 19, 2012, as she watched the hearings on birth control led by Rep. Darrell Issa. "I was in shock," Jordan told me. "They decided to drag my uterus onto Capitol Hill without reading me my Miranda Rights. I realized if I don't do anything, I will be wrapped in a blanket of complicity."

The day commenced at the site of the Triangle Shirtwaist Factory with approximately 800 in attendance. A walk down Broadway led to Foley Square where politicos, celebrities, and activists addressed, entreated, and revved up listeners from 1:00 p.m. to 4:00 p.m. The conversation covered women's rights, health concerns, economic security, and the nightmare that would ensue if complacency took precedence. There were placards embracing sentiments such as, "We Will Not Be Marginalized," "Keep Your Laws Away from My Uterus," and one held by a man, "GOP: Get Your Hands Off Our Women." My personal favorite was, "Probe Banks, Not Women." 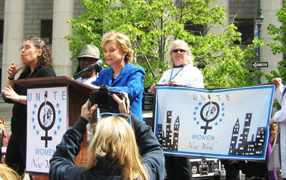 I got onsite at around 2:00 p.m., when Rep. Carolyn Maloney ("Where are the women?") was at the podium. She invoked the names of New York feminist forebearers such as Elizabeth Cady Stanton and Jane Hunt before saying, "We have to pass the Equal Rights Amendment. Why is half the population not in the Constitution?" Adding a mantra that would be oft-repeated during the afternoon, Maloney emphasized, "Remember in November!"

Stand-up comic Leighann Lord served as the "mistress" of ceremonies, and provided humorous and rousing transitions between presenters. Next up was actress Martha Plimpton. Emanating intense energy she began, "I am a United States citizen and I vote."

She continued, "Women have always been at the forefront of progressive movements. Women can be depended on when you need bodies in the streets for women's rights and human rights. We've been asleep. This hasn't happened overnight. They want to gaslight us. All we have to do is look at their policies and we know we're not crazy." Mentioning the number of bills that have been passed against women's reproductive health, Plimpton demanded, "Get loud, people!" Before her allotted two minutes were over, Plimpton underscored, "We will be engaged. We will be vigilant." She ended on the refrain, "Who owns your body? You or the state?"

Representing the Religious Coalition for Reproductive Choice, Rev. Matthew Westfox articulated the need for the separation of church and state. He suggested that the loudest groups were using religion to coerce others -- rather than respecting "individual conscience." He stressed, "When people use the name of God to control women, it is blasphemy."

Colia Clark, who was a Special Assistant to Medgar Evers, communicated emotively about taking the fight back to the streets. "The nice ways have always failed," she said. "Sisters, let's put our feet where our voices are. We won't turn back until America is free." Clark pointed to the challenges of women of color, asking, "Where do we go from here?" She answered her question with the statement, "Everybody's got a right to the tree of life."

Denarii Monroe was wearing a shirt emblazoned with, "The most dangerous place for a black child isn't in my womb -- it's in the Congress." She related to me her role in the day's events. "I'm here as one of the organizers because simply believing isn't enough. We have to make our voices heard through action."

Anne Klaeysen, from the New York Society for Ethical Culture, drilled down on the disconnect between America's international posturing and actions on the domestic front. She said, "Shame on our country for preaching democracy and freedom around the world, but denying equal protection under the law to over half of its population." Klaeysen also called out "sisters of privilege and complicity who do not join us!"

The last hour featured those who are trying to move the needle through their writing and activism. Gerit Quealy highlighted the importance of women knowing their history and the "women you stand on the shoulders of." Referencing the subtext of divisions among women, Quealy said, "When you look at women next to you, you can't be in competition if you are holding hands."

Jasmine Burnett, of Raising Women's Voices, Trust Black Women, and Sister Song NYC, was dynamic -- as she picked up Quealy's thread. "We have a lot to be pissed off about today. Black women. Queer women. I stand before you talking about oppressions inside our own movement. We are in this together. To sustain our movement, we need support. Stories can not be invisibilized. Where is the health equity in black women not getting the health care they need?" Pausing for emphasis, Burnett noted, "This country doesn't give a shit about a baby once it gets born."

There was consistent, verbalized incredulity that in the 21st century, women were refighting old battles that were supposed to have been won. Barbara Grufferman said, "I'm almost 56, and I can't believe I still have to write articles about this. It's crazy. I'm here for my daughters. We must make the promise that this doesn't continue. I have a vote and I'm not afraid to use it."

Fresh off of an appearance on that morning's Melissa Harris-Perry Show where she discussed her article, "Why Do They Hate Us?," Mona Eltahawy addressed the commonality of the repression of women in diverse cultures. She said, "I am Egyptian, I am American, I am a feminist. The Christian brotherhood wants to interfere with my vagina. The Muslim Brotherhood wants to interfere with my vagina. I say, 'Stay out of my vagina, unless I want you in there.'" Eltahawy demanded that representatives "stand up for women's rights and human rights." She queried, "Do the people who represent me here really represent me?" She also implored, "Go out and vote in November."

One of the final speakers was a member of the upcoming generation. Shelby Knox, who is 25, recounted how she had started asking questions at 15. She has since pushed back against those who think that "young women are apathetic." She self-identified as a "fourth-wave feminist, gender justice activist, and womanist." Currently the Director of Organizing, Women's Rights, for Change.org, Knox reiterated several of the issues that too often fall under the radar: the health challenges facing Native American women, incarcerated women who are shackled to beds while giving birth, and the rights of transgender people. "We must fight across the board," said Knox, "or it is not justice."

Although the hour was late and the crowd had thinned, Knox acknowledged those who had remained present and steadfast. "You are our warriors," she said. "We are not the future, we are the now." 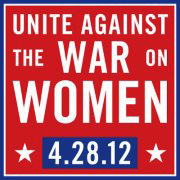