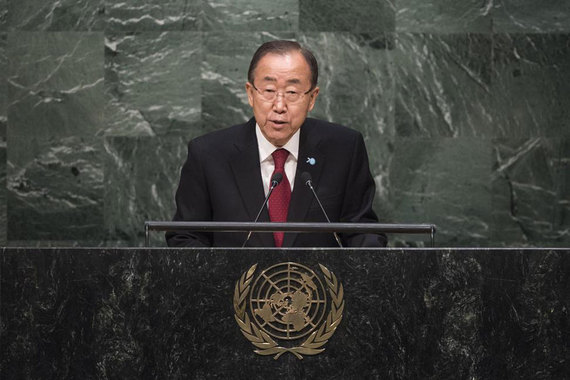 Violent extremism is a direct assault on the United Nations Charter and a grave threat to international peace and security.

Terrorist groups such as Daesh, Boko Haram and others have brazenly kidnapped young girls, systematically denied women's rights, destroyed cultural institutions, warped the peaceful values of religions, and brutally murdered thousands of innocents around the world.

These groups have become a magnet for foreign terrorist fighters, who are easy prey to simplistic appeals and siren songs.

The threat of violent extremism is not limited to any one religion, nationality or ethnic group. Today, the vast majority of victims worldwide are Muslims.

Addressing this challenge requires a unified response, and compels us to act in a way that solves -- rather than multiplies -- the problem.

Many years of experience have proven that short-sighted policies, failed leadership, heavy-handed approaches, a single-minded focus only on security measures and an utter disregard for human rights have often made things worse.

Let us never forget: Terrorist groups are not just seeking to unleash violent action, but to provoke a harsh reaction.

We need cool heads and common sense. We must never be ruled by fear -- or provoked by those who strive to exploit it.

Countering violent extremism should not be counter-productive.

This month, I presented to the United Nations General Assembly a Plan of Action to Prevent Violent Extremism, which takes a practical and comprehensive approach to address the drivers of this menace. It focuses on violent extremism which can be conducive to terrorism.

The Plan puts forward more than 70 recommendations for concerted action at the global, regional and national levels, based on five inter-related points:

Number one, we must put prevention first.

The international community has every right to defend against this threat using lawful means, but we must pay particular attention to addressing the causes of violent extremism if this problem is to be resolved in the long run.

There is no single pathway to violent extremism. But we know that extremism flourishes when human rights are violated, political space is shrunk, aspirations for inclusion are ignored, and too many people -- especially young people -- lack prospects and meaning in their lives.

As we see in Syria and Libya and elsewhere, violent extremists make unresolved and prolonged conflicts even more intractable.

We need to make a special effort to reach out to young people and recognize their potential as peacebuilders. The protection and empowerment of women must also be central to our response.

Poisonous ideologies do not emerge from thin air. Oppression, corruption and injustice are greenhouses for resentment. Extremists are adept at cultivating alienation.

That is why I have been urging leaders to work harder to build inclusive institutions that are truly accountable to people. I will continue to call on leaders to listen carefully to the grievances of their people and then act to address them.

All too often, national counter-terrorism strategies have lacked basic elements of due process and respect for the rule of law.

Sweeping definitions of terrorism or violent extremism are often used to criminalize the legitimate actions of opposition groups, civil society organizations and human rights defenders. Governments should not use these types of sweeping definitions as a pretext to attack or silence one's critics.

Once again, violent extremists deliberately seek to incite such over-reactions. We must not fall into the trap.

The Plan proposes an "all of Government" approach.

We must break down the silos between the peace and security, sustainable development, human rights and humanitarian actors at the national, regional and global levels--including at the United Nations.

The Plan also recognizes that there are no "one size fits all" solutions. We must also engage all of society -- religious leaders, women leaders, youth groups leaders in the arts, music and sports, as well as the media and private sector.

I intend to strengthen a UN system-wide approach to supporting Member States' efforts to address the drivers of violent extremism.

Above all, the Plan is an urgent call to unity and action that seeks to address this scourge in all its complexity.

Together, let us pledge to forge a new global partnership to prevent violent extremism.