When Universal Studios Florida first opened its doors in June of 1990, the way they wowed theme park goers was with an animatronic E.T. Who -- thanks to the 5800 names this mechanical alien had in his data base -- could greet most people by name. Not to mention that 39 foot-tall animatronic King Kong. Who -- thanks to his 54 foot arm span -- could reach right out into "Kongfrontation" 's ride path and then send a tramload of tourists hurtling toward the ground.

"Mind you, that was over 25 years ago," said Steve Blum, the Senior Vice President of Engineering & Safety at Universal Creative. "And while the technology that we used to power 'Kongfrontation' was -- for its time -- cutting edge, these days you have more computing power in your iPhone than we had in that entire show building back in 1990." 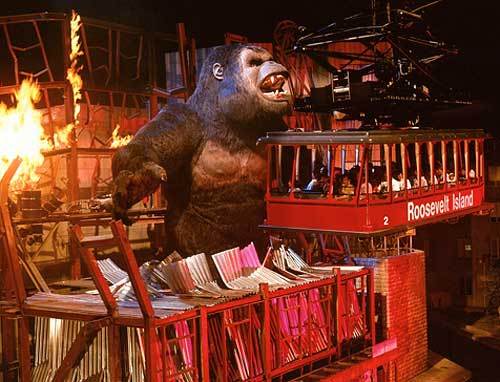 Right from the beginning, that was Universal's goal with its Florida theme parks. Create ground-breaking attractions which really pushed the boundaries when it came to technology. Place their guests right in the middle of their favorite movies & stories and then give these folks a visceral yet intimate experience.

It was with the May 1991 opening of "Back to the Future - The Ride" that Universal Creative showed how far they were willing to go to deliver a genuinely intimate ride experience to its guests. Rather than do what Disney had done with its first motion-based simulator attraction (i.e., 1989's "Star Tours." Which crammed upwards of 40 guests in the cabin of each Starspeeder), Universal decided to create a ride vehicle that looked just like the Delorean featured in that Robert Zemeckis movie which then sat 8 passengers.

Of course, just like every other theme park attraction on the planet, "Back to the Future - The Ride" had to be able to entertain a huge number of guests every hour in order to be considered an operational success. Universal Creative was able to achieve this goal using these seemingly low capacity ride vehicles by first building two Omnimax domes inside of a huge show building. And then -- inside of each of these two domes (on which concave surface the "BTTF-TR" ride film would be screened) -- they placed 12 different 8 passenger Deloreans. 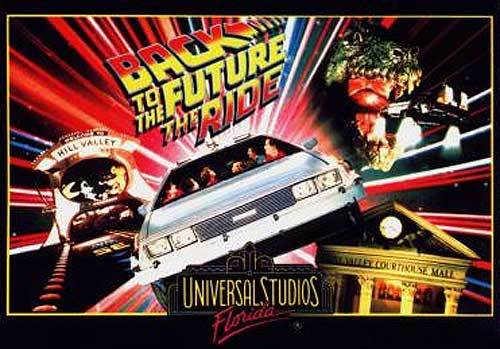 "We configured these ride vehicles in such a way -- on three different levels, four Deloreans per level -- inside of each of these projection domes that the guests really couldn't see the other cars. From their point of view, they were the only ones having this experience," explained Thierry Coup, Senior Vice President of Universal Creative. "Using our motion-based technology in this manner not only allowed us to add a high capacity thrill ride to Universal Studios Florida, it also gave our guests a ride experience that was both intimate & visceral."

More to the point, Universal Creative has made use of the advances in in-park effects and ride control systems that have been made over the past 25 years in order to make its theme park attractions seems that much more immersive & exciting.

"It kind of blows my mind when I look back at how far we've come just in the past 20 years. I mean, back in April of 1996 -- when we first opened 'T2-3D: Battle Across Time' -- it was a very big deal that we were able to send a trained stuntman riding on a mechanical motorcycle seamlessly through a movie screen every 30 minutes or so," Blum recalled. "That was a very tough effect to pull off at that time. But these days on our 'Harry Potter and the Escape from Gringotts' attraction, we give our guests almost the exact same experience. We seamlessly send them through a screen aboard this mine cart that's being pulled by a dragon. And we do that for a new group of guests every 32 seconds."

Speaking of The Boy Who Lived, it was with the June 2010 opening of The Wizarding World of Harry Potter - Hogsmeade that people really began to sit up & take notice of Universal's innovative use of technology. Though those who were dazzled by all those flying benches that were whizzing through the halls of Hogwarts castle may have missed some of the biggest challenges that Universal Creative faced on this project.

"Looking back on The Wizarding World of Harry Potter, I'd have to say that the biggest challenge we faced on that project was how do you bring all of that magic to life. I mean, when it comes to doing magic in the movies, recreating what J.K. Rowling had described in the 'Harry Potter' books, the filmmakers could always fall back on CG or cuts. Whereas what we had to do was turn Hogwarts castle & Hogsmeade Village into these physical places that you could actually visit. Where all this magic then had to happen right in front of your eyes," Thierry said.

"So a lot of seemingly small things, these little touches in 'Forbidden Journey' 's pre-show like those moving portraits, they took a lot of development. We actually had to create the technology which was used to make those portraits look like moving paintings," Coup continued. "There's a whole portfolio of patents that Universal filed just with the creation of this attraction." 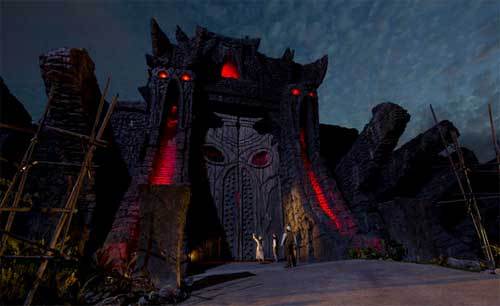 And speaking of patents, there are sure to be a few dozen more filed by the time "Skull Island: Reign of Kong" opens its doors later this summer.

"And what's so technologically innovative about the soon-to-open Universal's Islands of Adventure attraction?," you ask. Well, let's start with the "Skull Island" ride vehicle. Which -- just like Kong -- is a true behemoth.

Weighing 17 tons each, the five expedition trucks that will roll through this 3 million cubic foot show building are genuinely massive. Standing 13 feet tall, these 40 foot-long ride vehicles can carry 72 passengers at a time. 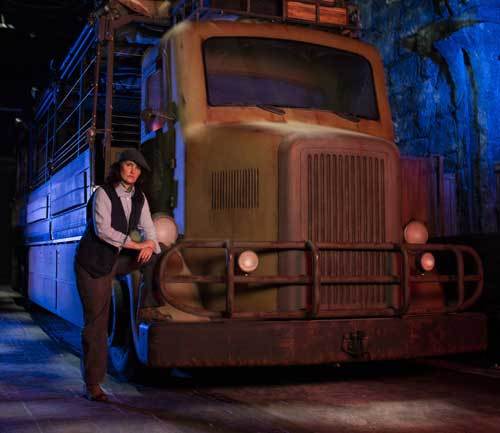 "And the best part is -- thanks to the pre-visualization technology that we can now use while we're designing new rides for the parks -- we were able, prior to the actual construction of these expedition trucks, to virtually sit in every seat of this ride vehicle. That way, we were able to make sure that every guest who climbs aboard one of these expedition trucks gets a great view of the action," Blum enthused.

And what sort of action should Universal Orlando visitors anticipate once their ride vehicle rolls past that 80 foot-tall wall which is supposed to contain all of Skull Island's prehistoric inhabitants? Mike West -- the executive producer of "Skull Island: Reign of Kong" -- stressed that this multi-sensory, multi-dimensional experience is a very different animal from any of the "Kong" -based attractions Universal Creative has produced.

"Previously, we took Kong away from Skull Island and brought him into our world. Well, with 'Reign of Kong,' we're bringing our guests to Skull Island. Their entire experience takes place in Kong's neighborhood," West said. "This story actually takes place before the events in the 'King Kong' movie. The expedition that our guests will be going on has actually beaten Carl Denham and his team to Skull Island. So they'll really be the first to experience the wonders & the terrors that can be found behind that massive wall." 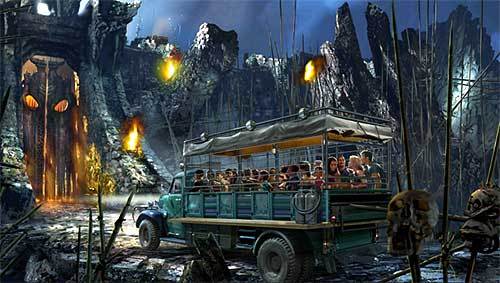 And then -- when you factor in that "Skull Island: Reign of Kong" will be the first time that a trackless ride system has been used in a Universal theme park (More to the point, no one in the themed entertainment industry has ever attempted to do a trackless vehicle of this size before) -- Universal Orlando's tradition of using cutting edge technology to provide its guests with genuinely immersive experiences just keeps going & going.

And the best part is that it's not just the new rides that get to make use of all this bleeding edge tech. Even opening day attractions like the "E.T. Adventure" get regular upgrades. Take -- for example -- the new software package that was just installed which now allows this animatronic alien that's found at the end of the ride to finally move beyond the 5800 names E.T. was previously allowed to say.

More to the point, those state-of-the-art digital projectors which are now being installed in "The Simpsons Ride" (which replaced "Back to the Future - The Ride" back in May of 2008) that will give guests a far clearer picture of what Krustyland looks like. 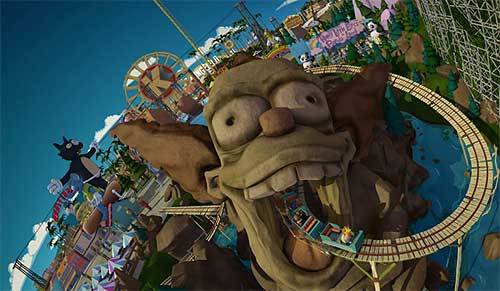 "When we first opened Universal Studios Florida back in June of 1990, the catchphrase that was associated with this theme park was 'Ride the Movies,' " Coup said. "Well, these days, thanks to all the cutting edge technology we use here at the parks, we no longer limit our guests to just riding their favorite films. They can now live them. We can place them inside of immersive environments like Diagon Alley."

"And that's all because there's no hesitation or trepidation at this company when it comes to deploying technology in order to deliver on some story point," Blum concluded.