To study for her biology I final in December, Van Truong, a sophomore at the University of Florida, decided to take a different approach.

"I knew I had to study for this exam, and I knew I’d be writing on this white board for hours. So I thought, 'Wouldn't it be funny if I did it in a form where people didn't know how to feel about it?'" Truong told The Huffington Post.

So she went to Smathers Library on the Gainesville campus and got to studying. While people around her memorized lists and made flash cards, she used a white board to write out all her notes -- in the form of Van Gogh's "Starry Night."

After three hours, her masterpiece was complete: 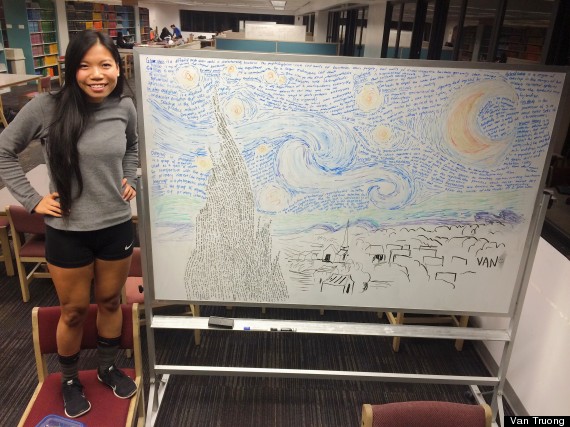 "I knew if I had to read through a packet of notes, I’d fall asleep," Truong said. "I don’t know if I would’ve lasted through three hours just going through notes."

Truong said she chose to recreate "Starry Night" because of its composition. Unlike a portrait of a person, which she thought would look disjointed if made out of individual lines of biology notes, words and sentences could look like Van Gogh's brush strokes.

Truong is no stranger to making art outside of a studio. A few years ago at the beach in Port Orange, Florida, near her home, Truong and a friend recreated the Mona Lisa using seaweed that had washed up on shore. 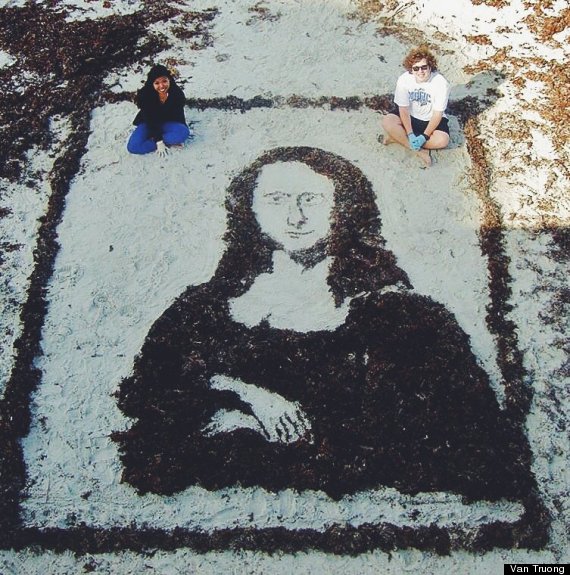 When she finished the "Starry Night" recreation, Truong went to the students on the other side of her white board and asked them to take a picture. Soon, the board gained fame on campus. It lasted a few weeks before someone erased it, Truong said. The fact that she picked such a well-known painting probably helped.

"People would be more likely to erase someone else's work if they didn’t recognize the image," she said.

But before the art got erased forever, Truong said she wished more people had interacted with it by adding their own embellishments. She added that she plans to repeat the same studying strategy in the future, leaving other art-filled white boards around the library.

And as for the biology final?

"I did 20 percent better than I did on the past two exams," Truong said.