Racist flyers targeting Chinese students were posted across a university in Texas this week, days after campus officials had released plans to make the school a more inclusive and diverse environment.

Students at the University of Texas at Austin discovered the offensive posters displayed on campus at the school of engineering on Sunday. The flyers contained derogatory messages directed at Chinese students, according to a copy that a student shared on social media.

someone put these up around UT engineering smh pic.twitter.com/kzrkr93hJo

The flyers accuse Chinese students of plagiarizing and “faking” their skills for a job or graduate school. It also claimed that “burping and farting are unethical,” but were a part of Chinese culture.

“We know they aren’t bad in your culture,” the note continued. “WE WILL TEACH YOU WHAT YOU NEED TO KNOW.”

UT Austin president Greg Fenves announced on Monday that the university was investigating the incident and called the posters “hateful and biased” and “completely unacceptable.”

Fenves tweeted on Tuesday that officials have identified the student responsible for the flyers. He said that the school was reviewing the incident under the university’s hate and bias policies.

“Every student, faculty member and staff member who sets foot on our campus has the right to learn, teach and work without fear and without being the object of hate and discrimination,” Fenves said in an official statement.

It’s unclear if the student was acting alone and whether or not the student will be formally disciplined. Officials at UT Austin did not immediately return The Huffington Post’s request for comment.

Update: We identified the student who may be responsible for hateful flyers, are reviewing under hate & bias policy https://t.co/D3zjcsEDif

UT Austin’s Chinese Student Association and student government published a combined statement on Tuesday saying that the flyer’s contents did not represent Chinese culture or traditions, “nor the UT students who so proudly honor their country and heritage.”

The organizations called the incident an ignorant “act of discrimination” and encouraged all students to join the Chinese Student Association to learn more about Chinese culture.

The document, posted to the university’s website on March 30, detailed the school’s plans to embrace and encourage diversity on the school’s campus. Key goals of the plan include strengthening minority student recruitment efforts.

“This plan ... helps make certain we are all doing our part to build a strong inclusive culture where all members of the community are respected and the educational experience for our students is enhanced by diverse people, scholarship and ideas,” vice president of diversity George J. Vincent said in a statement when the plan was released.

University officials held a town hall in late February to discuss the school’s new hate and bias policy. The meeting was held more than a week after a similar incident occurred, when the white nationalist group Vanguard America posted anti-Muslim flyers near the campus.

Students were initially upset with the university’s response to the February incident because officials appeared to defend free speech without condemning the flyers’ xenophobic rhetoric.

President Fenves denounced the language in a statement on Tumblr, calling it discriminatory and anti-Muslim.

. @UTAustin has issued a (problematic) statement on the posters. https://t.co/2hQR0SzNLQ Does anyone else see what's wrong with this?! pic.twitter.com/VwpyiWbSXO 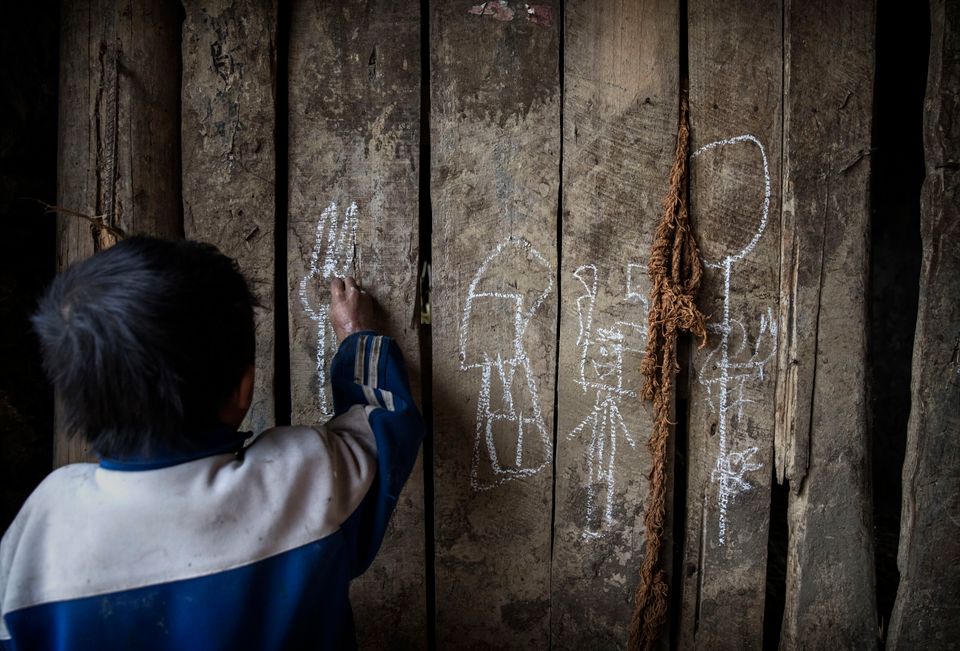 1 / 14
Luo Lie, 5, uses chalk to draw a picture on a wooden door of the family home. In the case of the Luo grandparents, who are elderly and poor, they do what they can to meet the basic needs of four children between the ages of 5 and 11.
Kevin Frayer via Getty Images