Students at the University of Texas at Austin have renewed their calls to remove a statue of Jefferson Davis, who served as president of the Confederacy during the Civil War, from the school's campus.

Activists have redoubled their efforts to have the statue removed in the days since the mass shooting at a historically black church in Charleston, South Carolina, last week. In the wake of that tragedy, a growing number of voices have demanded that South Carolina remove the Confederate flag that flies on the grounds of its Statehouse. Other petitions in Georgia, Maryland, Minnesota, Tennessee and Virginia have called for the removal or renaming of local landmarks that somehow pay tribute to the Confederacy.

The Davis statue has already been a source of controversy this year. It, along with statues of Confederate generals Robert E. Lee and Albert Sidney Johnston, was vandalized this week with graffiti reading "Black Lives Matter." The Davis statue had previously been marked in March and April as well.

"We had a very productive meeting with President Fenves and are positive that there will be positive discussion and change on campus," Mandalapu told The Huffington Post.

In a statement to HuffPost, Fenves said that he plans on Wednesday to announce a committee "of students, faculty members and alumni that will discuss the future of the Jefferson Davis statue and provide a range of options for me to review." 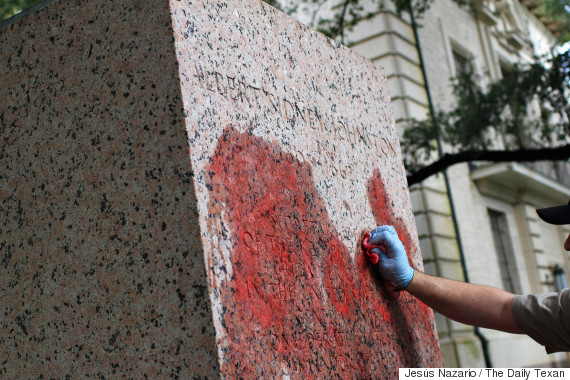 A worker at UT Austin cleans the statue of Albert Sidney Johnston on Tuesday.

Mandalapu and Rotnofsky listed the statue's removal as one of their platform points in their campaign and filed a resolution for its removal before they were elected.

"Statues are [a] means to memorialize and glorify the ideals and values of whomever they depict," Mandalapu told HuffPost. "Jefferson Davis was someone who vehemently supported the institution of slavery and white supremacy. That is not in line with the university's values and does not promote the ideals of a diverse and all-inclusive university."

On Sunday, the student government launched a petition to have the statue of Davis removed. As of Tuesday afternoon, the petition had received more than 2,400 signatures, including that of Rep. Joaquín Castro (D-Texas), according to The Texas Tribune.

"For myself, as an African-American female, I felt that not signing the petition was sitting back and watching things happen," Abigail Haile, a rising senior, told HuffPost. "If we get the statue taken down, I think that would be history made."

Mukund Rathi, a rising senior who published an op-ed about the statue in the UT Austin student newspaper this week, said he would like to see the statue removed and destroyed -- not placed in a museum, as has been suggested.

"As far as I’m concerned, I think there is no justification for the statue to be here," Rathi told HuffPost. "In light of the shooting in Charleston, we have to take seriously what that legitimacy means and what it can do."

Despite alumni and students calling for the statue to be removed, Haile said there are still people on campus fighting to keep it in place, arguing that Davis should be respected and honored for his role in history.

"His pillar was being a supporter of a slave society. That was his main focus, that's what he wanted," Haile said. "If you make one mistake, I understand that. But that's not one mistake. That's what his legacy is."