I was accused of plagiarism. Well, tracing to be more exact. And it was my grade 7 art class. See, I am not, and have never been, any good at drawing. Or painting. Or anything very artistic for that matter so the assignment to create something that I would be graded on was quite daunting. I took out the "How To Draw Aladdin"  book from the library for some help but even that proved too challenging for my skills. So I traced it. And it looked good. I mean real good. A little too good. The teacher clearly knew my rendering of Aladdin and Abu in an Agrabah market was enhanced and after my confession and pleading upon being discovered, I salvaged a C, thought I'll never be creative and moved on with my life.

Most of us have these experiences and stories of creative failure. What we may not know is that these stories and experiences that we have and tell ourselves might just be what is actually keeping us back from truly being creative in our lives, jobs, careers and organizations.

That's a much too simplified summary of David Burkus' new book Myths of Creativity but it is a concept that really struck me as I was listening to him on Mitch Joel's Six Pixels of Separation podcast (highly recommended for the record). His book and message goes about debunking myths that reinforce the idea that creativity and innovation are on some pedestal that only a gifted few can reach when the stars aligned and lightning strikes.

It's a powerful message not just because of how deeply entrenched the idea of "I'm not creative" can be but also because of what it means if we all are capable of being creative.

And it's not just Burkus discussing what creativity is, what it's not and how we can go about getting better at it. Ed Catmull, the president of Pixar Animation Studios and Walt Disney Animation Studios has a new book called Creativity Inc. where he shares some insights and lessons learned from his years working at some of the world's most creative companies. Insights and wisdom includes how to let ideas suck, that creative processes aren't easy or quick and that "at some point, all our movies suck". There's a collaborative process to creating great work.

In a recent Fast Company article a former Apple designer Mark Kwano talks about some myths at Apple with one being that Apple has the best and most creative designers. Instead, Kwano suggests they have the best culture and environment for ideas, inspiration and creation. That's why some designers leave Apple and are suddenly not as great. The environment you are in hugely affects your ability to create.

When researchers Jeffrey H. Dyer, Hal B. Gregersen and Clayton M. Christensen took an in-depth look at innovation and leadership they came up with The Innovator's DNA which is 5 main "discovery skills"; observation, networking, experimenting, questioning and associating. They didn't find that top and innovative CEO's were just "genius" or that they were naturally and supremely blessed with these discovery skills but the best CEO's spent 50% more time on these skills than others. Being a creative and innovative leader can be learned and practiced.

Austin Kleon in his book Steal Like An Artist embraces the idea that there is no original thought and honest artists answer the question "Where do you get your ideas from?" with "I steal them". Great artists draw their inspiration from others and creative ideas are often spin offs of past work or building off what others have started. Borrowing from others can be creative.

We even have myths and misconceptions about where good, single ideas come from. Steven Johnson discusses this concept with a "slow hunch" theory that basically says our great ideas or Eureka moments are actually long forming and occur over time by connecting a series of ideas, knowledge, experiences, etc. It feels instant but actually happens over time and takes some work.

So Burkus, Johnson, Joel, Kwano, Cattmul, Kleon and many others are discussing the same basic notion: we are all innately creative and capable beings and it is the effort we put in and environments we are surrounded by that gives inspiration allows for truly creative ideas and innovations to occur.

If you believe that statement, and I hope you do, you should feel a mixture of joy, freedom and excitement with fear, anxiety and pressure. Because now it is on you.

It's on you to seek out inspiration by reading, watching, listening and learning. It's on you to do the work to create something potentially great (potentially crappy) to put it out in the world and do it again regardless of the result. It's on you to create an environment where your employees are empowered to tap into their creativity to achieve new innovations. It's up to you to unleash your own creativity. 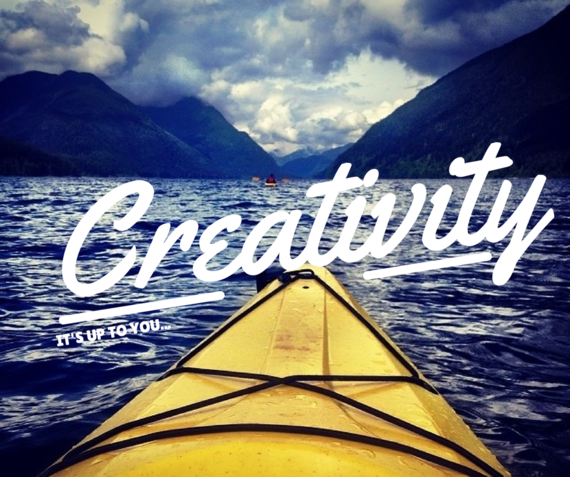