At the end of the longest decade any of us had ever known, November came again. The temperature hadn't dropped but the sun was predictably low, casting long shadows through the living room window as my mother and I stuffed her clothes into garbage bags and assembled boxes on the floor. All the leaves had fallen. It was time for her to move.

About 8 years ago, my parents built a house in a small town in New York state. They built it together. They poured over every detail. It was their dream house, but it was big, and as my father grew weaker it became clear that he couldn't handle the trip from the living room to his bedroom because of the distance and the stairs. So they found a home nearby that wouldn't require any climbing. It was much smaller and the bedroom and living room were on the same floor. Sometimes he would venture into the basement to watch TV, but eventually, he was confined to two just a couple of rooms, constantly rotating between his bed, the couch, and a recliner.

The house was on a lake. He loved staring at the water, and, for most of his time there, he could easily get out onto the porch, where he would sit for hours, looking over the rail into the distance. He never really shared his thoughts, though, at least not on death or dying, except to admit, every once in a while, that he was very afraid. He never said a word about the rosary he carried around around the house. At night, he kept it with his pills on his bedside table. I think eventually he got over his fear, moments before he let himself go and finally passed away. 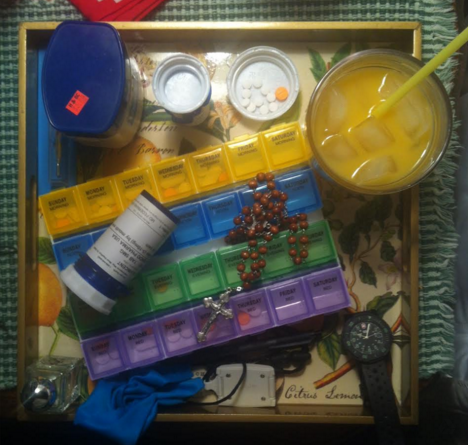 The old house, the house they built together, the one with the stairs, sat on the market for years after they left. Nobody was interested, and owning two homes in that area was, not surprisingly, a drain on my mother's finances. So she decided to sell the new place and go back to her dream house. It was too great to leave empty. And, after all, the plan had worked - they moved to a place where he could be comfortable as he approached his departure, and then he was gone, and she realized that she didn't need to be there anymore. A year later, she was finally moving on, but in such a cool way, because she was moving back to a place she loves so much.

That night, in the house she would be leaving soon, we wrapped coffee mugs in newspaper as the sun slowly set over the lake. It happened to be one year, to the day, that he saw his last sunset in that place. Over the horizon, I saw two separate contrails from two different airplanes cutting into the distance - red slashes against a deep blue sky. It was a beautiful sight, so I went onto the lawn to take a picture. My Mom walked onto the porch and called to me.

"Vapor from a jet stream."

I looked again. The two pink lines had converged just above the tree line, forming the shape of the letter V. And, even if you knew him, now would be a good time for me to remind you that my father's name was Vincent. 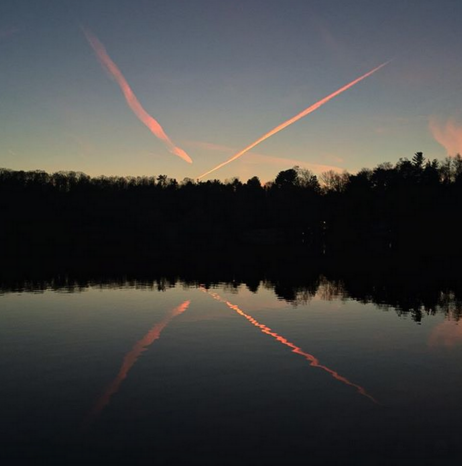