The trial of 93-year-old ex-SS officer Oskar Groening currently underway in Germany is receiving a lot of attention in the international media. A trial that may well be the last case against a living Nazi will be full of haunting images. But none so much as the one that went viral last week: 81-year-old survivor Eva Kor seeming to embrace ex-SS officer Groening. 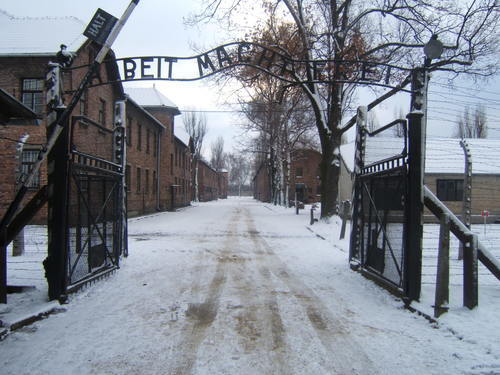 The Entrance to Auschwitz

Most of us cannot imagine being in the same room with a Nazi war criminal, let alone having a conversation with him. This incredible human being - and survivor - who lost her parents and sisters has decided to publicly forgive the Nazis as a way of empowering herself.

But it's not just personal. In 1995 Kor, who lives in Terre Haute, Indiana, convinced an infamous Nazi doctor, Hans Munch, to accompany her to Auschwitz, where he reportedly signed a letter affirming that the gas chambers there were used to exterminate Jews.

Back to the current trial - Groening, for his part, does not deny that he was in the SS and participated in Hitler's final solution (not by directly murdering anyone, but as a pencil-pusher who channeled stolen money from these victims for the benefit of the Third Reich). That is, of course, not insignificant. It took a massive bureaucratic operation for the killing machine to run smoothly, and money was at the heart of it. That is, forcing the Jews to essentially finance their own genocide.

This moral guilt I acknowledge here, before the victims, with regret and humility. I ask for forgiveness. You have to decide my legal culpability

At any time, Groening could have refused to participate, albeit likely at the expense of his life, or simply tried to escape to the Allies, as we hope any moral person would do. But like so many others, Groening just followed orders. He says he requested a transfer from Auschwitz, but was denied.

New German laws intended to punish the last surviving Nazis now allow those who did not directly commit violence to be prosecuted along with those who pulled triggers, operated the gas chambers, or committed other acts of murder.

Groening has spoken out in great detail about what he remembers from those dark days more than 70 years ago, atrocities he witnessed that I will not recount here. He does not proclaim innocence or even ask for mercy.

"It is beyond question that I am morally complicit," he said at the trial opening, attended by more than 60 plaintiffs, according to media reports. "This moral guilt I acknowledge here, before the victims, with regret and humility. I ask for forgiveness. You have to decide my legal culpability."

Holocaust researchers say it is unprecedented to have an SS witness so willing to testify to his own crimes and those of the German people and the Nazis. No doubt, he is trying to avoid dying in prison. But whatever sentence is meted out by the German court, part of it should require that he spend the rest of his days testifying in painstaking detail for the historical record not only what he did and what he saw, but what went through his mind at the time.

It could be of great historical value to have some small insight into the enduring mystery of how so many people were caught up in the storm of relentless hatred and scapegoating that ignited the Holocaust in the 1930s, and kept it burning until the Allies' victory.

This testimony should be added to archives, along with the Nazis' own meticulous documents - as many as 50 million pages, many of which are now publicly available. Convinced, of course, that the war would end differently, they were deeply proud of their evil work and wanted to preserve it for history; and individual ambitious Nazi officers most likely produced records - of deportations, mass killings, and confiscated property - they felt would benefit their miserable careers.

It never seemed to worry these arrogant psychopaths that the documents could one day be used against them in war crimes trials.

Of course, all the survivor and perpetrator testimony in the world, all the photos and film footage, even the remains of Auschwitz and other camps won't convince Holocaust deniers here and in the Middle East. Their hatred of Jews and Israel create willful ignorance immune to objective research and logic.

The president of the Palestinian Authority, Mahmoud Abbas, has a long history of negating history, claiming that the Jews pulled one over on the world to manipulate their way into Palestine.

The leaders of Iran, as they threaten Israel with a nuclear version of the Holocaust, have been all over the map on the German genocide, with some saying it's a myth, others calling for more study. Holocaust denial was a core belief of President Mahmoud Ahmadinejad, who left office in 2013. His successor is more moderate on the topic. But in March of 2014, "supreme leader" Ayatollah Ali Khameni was quoted as saying "The Holocaust is an event whose reality is uncertain and if it has happened, it's uncertain how it has happened."

Maybe instead of throwing Oskar Groening in jail, President Obama could bring him along on his next nuclear negotiation session to teach the Iranians a thing or two about how and what happened.

If he fails to do so, kind souls like Eva Kor may forgive. But the rest of us ought to demand much more accountability.