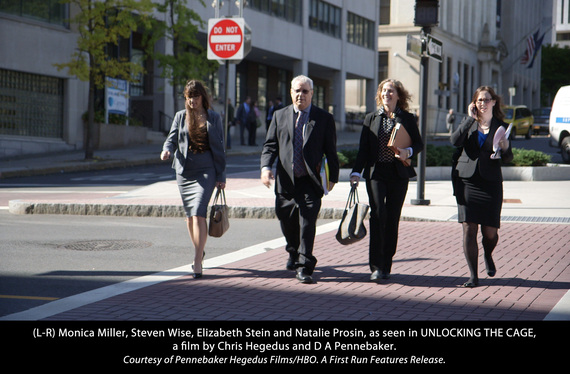 "Unlocking The Cage" is a smart, heroic act of film-making. This compassionate and distinctive work is a combination of single-minded legal drama and humane consciousness raising possibilities. It is a story about something that is often very near to our hearts. Steven Wise, an attorney and the founder of the Nonhuman Rights Project has been doing battle on behalf of animals for over 30 years. With his devoted colleagues he finds a way to make a monumental difference on behalf of two chimpanzees held in captivity at Stonybrook University .

"Unlocking the Cage" follows Steven Wise and his colleagues over three of their many years of patient, confident, and dogged yet good-humored pursuit of legal person-hood, (meaning simply one having capacity for legal rights), for (some kinds of) animals. In front of a sign in his office declaring they may be "The only lawyers on earth whose clients are all innocent," his consortium examines the treatment and fates of chimpanzees, "adored" for entertainment purposes, employed for research, and even celebrated for their contribution to space travel, and navigating the complex web of legal, legislative, philosophical, scientific, and even well-intentioned misunderstanding and emotional bonds of some human caretakers, Wise soldiers on. He notes the mistreatment of, denial of autonomy and self-determination to, and often solitary confinement of these animals is comparable to the treatment we bestow upon the worst criminals amongst us. The irony of the cost to the animals, including, ironically, those used in research that demonstrates their empathy and cognitive capacities is not lost. Pursuing habeas corpus on the part of individual animals whose autonomy is denied, as opposed to questioning their treatment under animal welfare laws, not only allows their legal status as things to be challenged, but enables Wise's team to file repeatedly....which they do.

The goals are lofty but clear: to "kick the first door open:' change the way people view non-human animals and confer legal personhood upon them. The fates of the successive potential animal plaintiffs demonstrate, as Wise puts it, that "their captivity and lack of legal rights is literally killing them. Seemingly incremental steps in the form of what seem to be discouraging rulings are celebrated though, each pointing the way to their next argument. As they intentionally pursue personhood as step one, it becomes very clear what a giant leap personhood in fact will be, for these individual animals of these specific species, as well as for the implications for other individuals and species, and for future cases they may set precedent for: the legal transubstantiation, as Wise calls it, from thing to living being with rights, (And though some may object to the criteria which he calls "practical autonomy," by which the species are chosen or line is drawn, the opening and closing sequences, taken together with the designation of an "intentional" step one, might suggest this goal is also much less incremental than it itself may seem.) And though the pace can seem glacial in the midst of things, just another series of incremental steps in the multifaceted pursuit of improving the lot of animals as people become increasingly aware, the good humor, confidence, and determination, and celebration of each step by Wise et al, and a step back, imply another, more encouraging perspective. Wise's confidence that we're at the end of the beginning, and the associations of Bob Dylan's "I Shall be Released" closing out the film, certainly point that way.

D. A. Pennebaker and Chris Hegedus once again do an outstanding job to present this picture of justice on its way to being recognized for sentient beings who seem to understand human language but cannot speak it and for those who can speak but cannot fully fathom the feelings of those who are not human but feel profoundly.