The fact that David Wood's "Beyond the Battlefield" series for The Huffington Post won the Pulitzer Prize this week, may be a sign that we are ready to ask the question; "Why are we more comfortable sending men and women into combat, than we seem to be with embracing and aiding those same individuals, often profoundly scarred internally and externally, when they return to civilian life?"

As a storyteller, filmmaker I am working to shine a light on another worthy hero - a woman who championed those whose lives had been profoundly and forever changed by war. 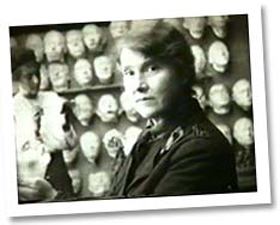 Nearly 100 years ago, American figurative artist Anna Coleman Ladd led a heroic crusade through the nights of Paris where a nocturnal culture of human gargoyles was rapidly growing. These soldiers were hiding, but not by choice. The powers in place at that time in French history had asked these "gueules cassees", men with broken faces, not to show their severely disfigured selves in public, as it was feared the very sight of them would crush civilian morale.

And what of their morale? Well, it was expected, and perhaps it still is expected, that a good soldier would know how to suck it up -- to use a modern term -- in the name of further protecting unwitting civilians.

Ironically, as if the inhumane brutality of trench warfare weren't enough, these soldiers had been mutilated by their army issue "protective" helmets. When an enemy bullet hit this steel "Casque de Adrian", it would often shatter through the face and neck of the soldier, shredding his features or worse.

Though pioneers in maxillo-facial reconstructive surgery like Harold Gillies in Sidcup, England were making progress, there was nothing close to modern day plastic surgery, much less face replacement surgery. A man could expect to endure dozens of surgeries only to step back into his life as an outcast leftover of war.

The human body was never engineered to withstand chemical weapons, artillery fire or a multitude of other destructive war paraphernalia dreamed up by -- humans. 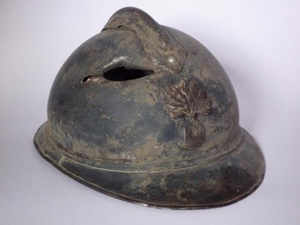 Anna Coleman Ladd, who had studied with Auguste Rodin as a younger woman, returned to Paris with her husband Doctor Maynard Ladd who would participate in the war effort.

After learning of the growing nocturnal culture of gueules cassees, Anna repurposed her sculptural skills to create extremely lifelike electroplate masks that she would then paint to the likeness of the soldier's former self. These masks afforded these men a chance to step from the shadows of the night, procure work and face their loved ones.

Anna came to the realization that even with her masks, her friends' internal and external wounds would never disappear. When she returned to Boston shortly after the war, her work had turned from more whimsical pre-war fare -- to hard hitting, realistic and compassionate sculptural portrayals of those forever affected by war.

As we approach 2014, the 100-year anniversary of "The War to End All Wars", this story remains modern, poignant, as socially relevant as ever.

I believe that Anna Coleman Ladd and her work with the mutilated soldiers of WWI deserve to be illuminated. For me personally, having been raised by figurative, humanitarian artists John Henry Waddell & Ruth Waddell, Anna's story is also rich because it examines a moment in history where art and life met and served to further one another. 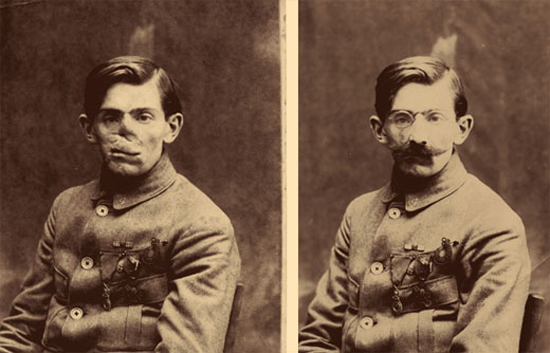 War has been the subject of so many masterful films by our best male directors. Mask Maker is not a film that focuses on combat, might, ego or winners and losers. It is a story about the individuals who survive combat and the repercussions of that trauma on those individuals as they continue their lives. It will be a film written and directed by a woman, the main character is a woman, a war hero extraordinaire! Perhaps Kathryn Bigelow was onto something when she directed her Academy Award winning film The Hurt Locker. Perhaps, as we approach this 100 year anniversary of WWI, it is time for the women to contribute their cinematic perspective on war.

The film is championed by producers Nathalie Gastaldo and Philippe Godeau at Pan Européenne, a prestigious film company in Paris. Together we are working to realize this film story, which pierces deep into the shadows of the First World War. We are currently in the process of casting the leading actress who will portray Anna Coleman Ladd.

War is hell. Perhaps the boundary between civilian life and military life begins there. A soldier can say; "I have been there. I have experienced war. I am other." What Anna came to understand, was that until that boundary is torched -- until we hear out our returning soldiers, until we all open our eyes and face the true "hell" of war -- the deep and lasting effects of destructive combat on the individual -- we will continue to blindly send men and women into harms way without properly preparing the extensive long term care programs that will, as long as there is war, always be necessary.

The relationships Anna formed with these brave wounded men transformed her, too, as a woman, a humanitarian and as an artist who would never turn her back on truth.

David Wood's series deserves the Pulitzer Award because it is beautifully executed, but also because like Anna, David Wood opened his own eyes and ours, giving us all a window in to the repercussions of war on these individuals.

Does the great 'carpet of denial,' under which we sweep human reminders of war, blanket our planet? The truth, and perhaps the key to future peaceful negotiations, is that we are not willing to face what we have wrought when it comes to war.

But what if we were?

What if a stipulation of war was that each individual of the countries represented in any given battle, had to spend even one day a month with a psychologically or physically wounded returning soldier? Had to participate in the rehabilitation of that individual?

How might that change our perspective on wars and the individuals forever altered by them?

Amy Waddell is a filmmaker living in Paris, France and Santa Monica, California. She is a graduate of USC Film School and has spent the past several years making humanitarian documentaries on Darfur, India and most recently the Native American quest for Earth consciousness, for the Annenberg Foundation's explore.org. She is now working with her producers at Pan Européenne, Paris to realize the feature film Mask Maker for the 100 Year Anniversary of The Great War.