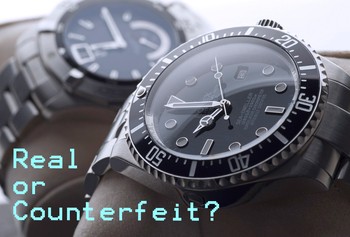 Imagine that a dear and beloved friend gave you the gift you always dreamed of -- your very own Rolex watch! Not only did you treasure the gift, but you have been ecstatic ever since your incredibly generous and kind friend bestowed you with this wonderful and thoughtful gift. Although surprised with the gift, it didn't shock you, as you were privy to stories about his generosity and kindness to others, who similarly longed for something he was able to give them.

A few months after receiving your gorgeous Rolex, you notice that the crystal has taken on some scratches, which seems unlikely since Rolex watches are known for their scratch resistant sapphire crystals. Three months after that, the unbelievable happens: the watch begins to lose time! You don't dare mention it to your friend for fear of appearing ungrateful and disrespectful. You choose to keep it a secret, as the watch is more than just a timepiece to you; it is symbolic of the closeness that you and your friend share. After all, you think, it's not a big deal that your beautiful watch loses only a few minutes a day. No harm, no foul.

To your great surprise, six months after first receiving your cherished gift, your scratched and poorly functioning but beautiful Rolex stops working altogether! Confused but curious, you bring it to a watch repair shop, where you learn that the treasured gift from your treasured friend is a fake; nothing more than a $75, made in China, counterfeit!

With the best intentions, you kindly and sensitively email your friend to let him know he was duped into buying a counterfeit watch. You recommend that he pursue some form of compensation from the criminal jeweler who sold it to him. Although "duped" and "criminal" may not have been the best choices of words, you trust your friend to take it in the spirit in which it's intended. His response confuses you, as the shared experience of disappointment and frustration you expected was countered by anger and defensiveness. He blames you for prematurely jumping to conclusions, judging him, and being irresponsible and reckless with the valuable gift he unselfishly gave you. The situation gets even more bizarre when you realize that the group of seven men who belong to your shared social circle are carbon-copied on this particular email conversation.

Shocked and dismayed, you reflexively respond to him alone with a firm "chill out" and "back down" message, while asking why he would include the guys from your group in this conversation. This response lights him up like a match thrown into a puddle of gasoline. In a fit of indignant anger, he demands that you return the watch to him so he can disprove your "baseless and vindictive" allegations.

Following your well-meaning attempts to calm him down, diffuse his defensiveness and get him to stop blaming you, you notice that his personality shifts to one that is aloof, cold, and disinterested in hearing anything more about your experience of disappointment. Being confused and stunned by the sum total of his anger and apparent retaliation for your simple heads-up about the watch, you naturally comply by returning the watch to him. You don't dare challenge his bizarre request because its abundantly clear that doing so would trigger him to an even higher level of histrionic and displaced anger. Plus, you are already embarrassed because all the guys in your group are now privy to this private matter. Little did you know that, by returning the watch, you also forfeited any possibility of clearing your name and restoring your reputation that has been tarnished by this unfortunate and unfair smear campaign.

You will be left trying to reconcile how and why your friend's empathy, altruism, and sincerity disappeared in an instant and unexpectedly transformed into a laser-focused crusade to hurt you. After careful consideration, you decide to let the whole situation go, as the cards are already heavily stacked against you. Unfortunately, it's too late and the domino effect can't be stopped as you learn through the grapevine that your former friend has masterminded a smear campaign that will culminate in an expressed directive to exclude you from all future group activities. The "out of left field" abandonment by your friends will add another layer of trauma and betrayal.

You will be left with a "WTF" set of feelings, while trying to piece together what happened and why. Similar to other victims of covert narcissists, you will sadly realize that your "friend" and the friendship were never real. You may also come to the deeply disappointing conclusion that your counterfeit friend deceived you and others by creating multiple layers of fabricated personality traits, which were designed to benefit him. In other words, you will be shocked at the realization that your friend's generous, unconditionally loving and altruistic persona was nothing more than an Oscar-worthy performance that was developed, practiced and honed through a long list of other discredited and discarded "friends."

What you will soon learn is that this beloved friend was always a covert narcissist and the friendship you so dearly appreciated and valued was nothing more than a counterfeit, much like the Rolex watch.

Covert narcissists are masters of disguise -- successful actors, humanitarians, politicians, clergy members, and even psychotherapists who are beloved and appreciated, but are secretly selfish, calculating, controlling, and vindictive. They create an illusion of selflessness while gaining from their elevated status. Although they share similar basic traits with the garden variety narcissist, i.e., the need for attention, affirmation, approval and recognition, they are stealthier about hiding their selfish and egocentric motives. Unlike the in your face narcissist, who parades his narcissism for all to see, the covert narcissist furtively hides his real motives and identity.

These narcissists are able to trick others into believing they are honest, altruistic and empathetic individuals. They are successful at pretending to be a more likable version of themselves, knowing that if their true identity was uncovered, they would not be able to maintain the respect, status and prestige that they have so manipulatively obtained.

Compared to overt narcissists, covert narcissists are more reserved and composed. By not advertising their deeper narcissistic values and motives, they are able to achieve their goals, while protecting their innermost insecurities and vulnerabilities. Unlike overt narcissists, they expend a great deal of psychological energy containing or hiding their callous, indifferent, and manipulative inner selves. Even though covert narcissists have repressed the full scope and magnitude of their personality disorder, on a semi-conscious level, they are aware that their fantasies are embarrassing and unacceptable.

Because covert narcissists are able to create and maintain a facade of altruism and unconditional positive regard, they are able to function in positions that are traditionally not attractive to narcissists, e.g., clergy, teachers, politicians, psychotherapists and others. Even though they are able to replicate the known characteristics of these positions, they are often deeply insecure and secretive about their lack of knowledge or inability to perform the most essential tasks. For example, a covert narcissist who is a psychotherapist will have mastered the stereotypical career-specific, idiosyncratic behavior patterns such as reflective listening, supporting and accepting feedback, and gestures that mimic unconditional acceptance.

However, this covert narcissist psychotherapist will be deficient in the most critical area of the job. Although they attempt to demonstrate honesty, sympathy and empathy with their clients, they ultimately fall short. They are simply unable to master the key elements of the position, as they are inherently judgmental, controlling and emotionally aloof. These therapists often become agitated at their clients when challenged or questioned. Clients who do not let them control the process will often trigger a narcissistic injury.

These secretive and slippery narcissists react to their unmasking with the full force of their arsenal of weapons that you would never guess existed. When they perceive a threat to their carefully and meticulously crafted public persona, all bets are off! Since their personal and professional reputation is built on a foundation of lies and misrepresentations, they will protect it by any means necessary. Their reflex to attack the perceived threat is fueled by an adrenaline-infused survival instinct that is no different than if they were cornered by a pack of hungry wolves. They will try to crush the threat, while positioning themselves as the victim of a premeditated vindictive and grievous harm.

Visit Ross's YouTube Chanel where his 80 videos have been viewed 3.5 million times www.youtube.com/user/clinicalcareconsult