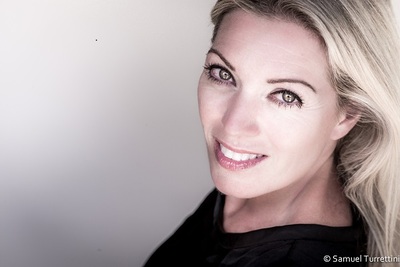 It's hard to know where Norwegian author Unni Turrettini's life will take her next. Her book, "The Mystery of the Lone Wolf Killer: Anders Behring Breivik and the Threat of Terror in Plain Sight (Pegasus Books, November 16, 2015) about the tragedy of the 2011 Norway attacks, is receiving excellent reviews. In September, she came to Boston and gave a talk about her work at the prestigious Chilton Club. This November 5th, she'll be presenting a TEDx event at Institute Le Rosey, Switzerland. Currently her latest work, a comprehensive analysis of the Nobel Peace Prize, is being represented by Linda Langton of Langtons International Agency, and under consideration with publishers.

We managed to catch up with Unni through Skype, on an early afternoon just outside Oslo, Norway, before her two children returned from school, to talk about her life, her writing, and her worldview.

Unni Turrettini was born and raised in Norway, the daughter of adventurous parents who moved frequently around the country, so she is familiar with all areas of this Scandinavian nation. Her father was an engineer working in mining and oil fields. Because the family moved so often, from the northern border adjacent to Russia to the southern tip of the country, Unni found it easy to adjust and fit in to any new environment.

As a teen, Unni wanted to travel and see the world. She spent a year as an exchange student in Kansas City, Kansas, and learned quite a lot about family life in the American Midwest. She loved her host family and enjoyed her time there immensely. After her trip to the U.S., Unni returned to Norway, and once she was ready, studied law in Paris, France and Boston University in Boston, Massachusetts, and received admission to the New York State bar.

"We just returned to Norway from Switzerland. I spent eleven years there." Unni laughed, "It's the longest I've ever lived in one place! I've been abroad for 20 years. I guess I lack roots, and often feel restless if I'm in one location for too long. Now we are back in Norway. My experiences abroad were great, but it feels good to be back and live on the water. It's peaceful, close to nature, and safe. My kids can have freedom here that they can't always have elsewhere. My oldest can ride his bike, and do stuff on his own."

Unni feels that her time abroad has made her less Norwegian than those who never left the country. She intimately understands American and European cultures that differ radically from typical Norwegian society. It has colored her worldview and she is able to see both the positive and negative prevalent in her native culture, and this insight enables her to incorporate different views and cultural perspectives into her writing and research.

"I was a wild girl, forced to conform to the Law of Jante, or Janteloven. Although Norwegian society subscribes to this concept which criticizes individual success and achievements as unworthy, I knew I was different. Even though I was forced to conform to this inflexible rule, I was full of life and a dreamer. I was too loud, too cheerful, too active. I had to force myself not to stand out too much. It's why I left. I didn't feel at home, so instead I went abroad, studied, became an overachiever and made a life away from the Norwegian norm." She sighs. "Norway has changed somewhat, so it was easier to return with my children. The society has opened up somewhat so that individual achievement isn't as suppressed as it used to be."

Is that why you chose to write about Anders Behring Breivik?

"Let me be clear. Anders Behring Breivik is a monster. He slaughtered 77 people and wounded hundreds more. And right now he is getting all the attention he ever wanted. He has an audience, and instead of locking him up and throwing away the key, he still commandeers an audience and media attention.

"It was that it happened so close to home. Who could have thought a home grown terrorist would be in Norway? As I followed the trial, I researched everything I could find on similar killings worldwide."

The Mystery of the Lone Wolf Killer: Anders Behring Breivik and the Threat of Terror in Plain Sight takes on how the Law of Jante could, in some instances, spawn a vile, murderous killer such as Anders Breivik, and not recognize the signs of a domestic terrorism seeking a cause and chaos within a peaceful society. On July 22, 2011, Anders Behring Breivik blew up a government building trying to kill Norway's leadership and then went to Utøya Island where he slaughtered teens and young adults at their summer camp. Unni compares Breivik to other lone-wolf killers, who unlike the Aurora and Sandy Hook killers, were out to prove their ideological superiority by causing as much mass destruction as possible. Tim McVeigh, Eric Rudolph and the Unabomber Ted Kaczynski are all examples that she equates to Breivik.

"If it can happen here, it can happen anywhere." Turrettini explains and indicates that the combination of conditioning and shame that can facilitate the process of becoming a killer, and tries to show it's not just an American problem, but a world problem as well.

What are your ambitions for your writing career?

"I love to write. I feel free doing it and if I am able I plan to continue writing and publishing as a living. I also love public speaking and find it rewarding to touch someone with my words. I believe in empowering people, and since I am better at writing than extemporaneous speaking, I am able to transmit what inspires me.

"I am a truthteller. What I say may not be groundbreaking, but the way I use my words can affect people. I touch people in different ways, and I know that what I say may be difficult, but I am ready to learn from criticism."

Your new book is about the Nobel Peace Prize. What truths are you revealing in this book?

"It is well known that all the other Nobel prizes are awarded by Sweden, but in Alfred Nobel's will, he stipulated that Norway award the Peace Prize. At the time he died, Norway and Sweden were under one King with Norway as the "little brother" country. Nobel thought that humble Norway would choose the best candidates in accordance with his wishes."

This was before Norway became a powerhouse in the energy sector and one of the richest societies per capita in the world. Turrettini's new book delves into the controversial selections for the Peace Prize and examines those choices and the peacemakers who did not receive the prestigious award. It examines how the Peace Prize no longer resembles what Nobel intended and how the power and prestige of the award has gone to the Norwegians' heads, thereby negating the humility and the substance of the prize that Alfred Nobel intended.

"It's been a fascinating study of this prize. I mean, there are only so many prestigious awards. The Academy Awards, the Nobel Prizes, and the Nobel Peace Prize. I wanted to see what happened, who Alfred Nobel really was, and how the evolution of the Peace Prize as a way to promote peace, has become a popularity contest, with Norway choosing the victor."

What is the hardest thing about writing about Nobel?

"It's feeling as if I were betraying Norway. It's not exactly a marketing book for Norway. I am scared of the reaction that the book may get. As a Norwegian I feel responsible and I get what it means to be Norwegian. Still, because of spending so much time out of Norway, I am in the unique position of being able to view the culture from a distance, and provide insights into their sacred cow, the Nobel Peace Prize."

"I guess it comes down to the old adage, 'If liberty means anything at all it's the right to tell people what they do not want to hear.'"

When did you decide to become a writer?

I wasn't too happy being a lawyer in corporate law. So instead, my supportive husband and kids accept that I write and research full time. I love it.

How do you think you've evolved creatively?

There has been so much to learn. My mentor, Bonnie Hearn Hill, has taught me to be braver and to control my writing. I have also found peaceful moments and create space for inspiration. The research is the easy part...I am very left-brained. The writing and thinking or right-brained stuff is much harder. I still need to learn more, so I can keep improving.

What is the easiest thing about writing?

Writing is easier than talking. I am not usually a talker, so I feel more confident when I can write my thoughts down.

What book/s are you reading at present?

I like to run, take walks, hike, and swim. I do my best thinking in nature and being alone.

What is your favourite motivational phrase?

"Nothing in all the world is more dangerous than sincere ignorance."

What is your favourite book?

The Old Man and the Sea by Ernest Hemingway

Where can you see yourself in 5 years?

Writing articles, books, and more personal stories, fiction based, and motivational, and being involved in making documentaries. International keynote speaker, and more time in the U.S. and the ocean

What is your favourite movie?

Forest Gump. Such a beautiful movie. "You have to do the best with what God gave you" is my favorite quote when his mother tells him this.

Trust yourself, be brave enough, and be kind to yourself, and don't care about what others think.

Which famous persons, living or dead, would you like to meet ?

Unni Turrettini is a fascinating up and coming writer to follow and we'll happily keep you all informed about her progress - that is, if we can keep up with her!