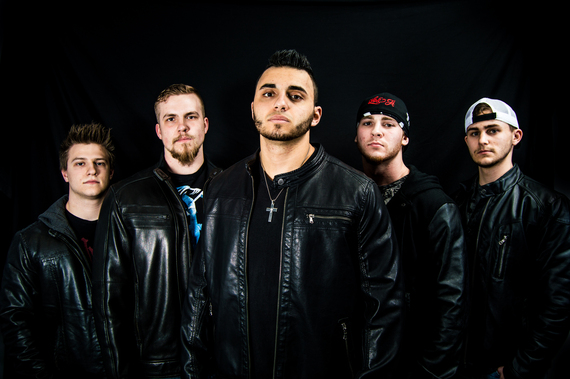 If there was not a reason for keeping music in the schools before, here is an example of why music programs are important: Unparalleled Height. This is a band of young guys that all started playing music at an early age. Most of the group members learned about music through the school music department. In my opinion, they play like they are a seasoned rock band. In reality, their first tour will be this year. They have done a few albums and played some shows; however, this summer will be like their final exam before they graduate to being true blue rock stars.

The band members still have day jobs. Tyler, the guitarist, is in the Marines. The drummer, Justin, is a personal trainer. Everyone else is pretty secretive about their occupation. I suspect that they either are ninjas or superheroes.

This group of guys really wants to make an impact on their fans, as well as the music industry. I asked the group if they ever write songs that are not great at first. Their answer was, "Every song. Some songs we know right off of the bat that it's a good song. Others are more of a process." You've got to give them credit for not giving up, even if the face of writing songs that were not so great at first. They kept writing and rewriting, until they wrote a number of great songs. It is part of their charm: they are talented but they keep working to get better at making music.

Another reason that I suspect that they might be superheroes is that they have a real connection with their fans. When I asked them what motivates them, they replied, "We want to inspire people and motivate them. Hopefully, our music can uplift them."

Apparently, they have already had a positive impact on some of their fans. The band gets quite a few messages on their social media accounts from fans, who are inspired to live life to the fullest (and maybe to also go to the gym).

I asked Unparalled Height what they would say to anyone who feels like giving up on life. The band responded by saying, "Any difficult part of life is given to us to test our character and find out the person that we are. Struggling paves a road to success and happiness. Everyone struggles and fails throughout their lives. In anything you look at, music, sports, business, life in general, the people we look up to have struggled time and time again, but they refused to give up and that has allowed them to live a happy and rewarding life. Each time you give up when you are struggling, you are cheating yourself of the best life you can lead. Don't ever give up."

This is the band roster if you want to compare it to a list of superheroes. If you haven't seen any of them in the same room as Batman, they just might be Batman.