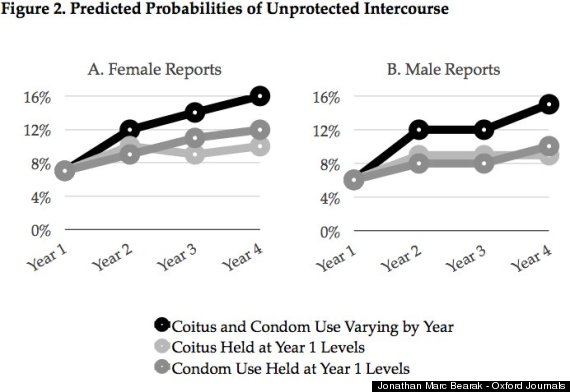 "College may not discourage condom use directly," Bearak told The Huffington Post in an email, "but rather, expose undergraduates to a pool of potential partners with whom they feel safer or otherwise place them in social situations which do not encourage condom use." In other words, students may feel a false sense of security within their campuses.

"Students’ perceptions of safety and trust, or their integration into the college social environment more generally -- may affect condom use," Bearak wrote. In fact, he found, condom use remains about the same from freshman to senior year in situations that involved people who did not attend their college.

The study used data from the Online College Social Life Survey, which was given to students at 21 colleges from 2005 to 2011. The dataset includes variables like demographics, dating, attitudes and sexual history.

The most surprising trend Bearak found was that "students from more advantaged backgrounds actually use condoms the least, in freshman year." The study used each student's mother's education, a collected data point, as a socioeconomic indicator. The rate of condom use converged for students from different backgrounds by senior year, however. 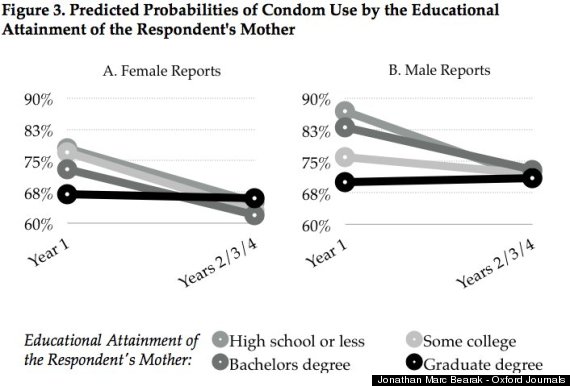 Bearak believes this trend comes from ingrained perspectives from students' pre-college backgrounds. Students from more advantaged backgrounds "may feel safer, such that they perceive warnings about the potential consequences of sexual behavior to apply less to them." This especially applies to sexually transmitted infections.

"I think the consequences of unprotected sex are more visible among disadvantaged high school students, not the least because of teenage pregnancies," Bearak added. "It’s also among this group that interventions are focused. For more advantaged students, in contrast, the consequences may just not be visible."

The study was also able to touch on how real the "hookup culture" is.

"Among freshmen, more students have hooked up than have gone out on dates," Bearak said. He said the idea of there being two distinct groups of college students -- those who have casual sex and those who do not -- is simplistic.

"There are really at least three groups -- those who graduate college without ever having sex, those who have sex only in relationships, and those who (also) have casual sex. Most students fall into the latter category (having casual sex)." 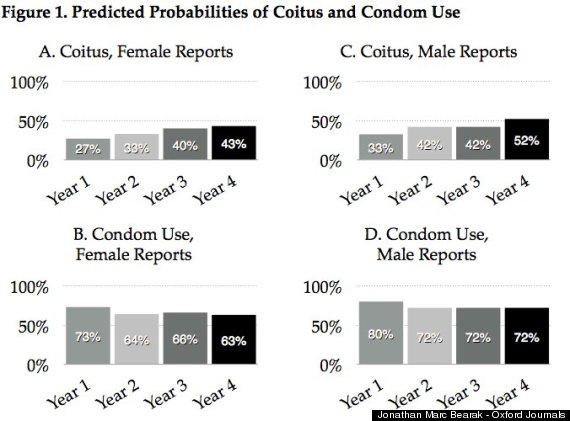 The data marks "hookups" as "sexual events that occur outside a traditional date or relationship." The existence of more non-traditional modern relationships with repeat partners "does not explain why students have more sex and use condoms less as they progress through college," Bearak said. He added that "hookups with repeat partners may not be safer than hookups with first-time partners because hooking up more than once with the same person does not imply monogamy."