When Christa Maiwald emerged from art school in the mid 1970s, women artists, influenced by the "raised consciousness" of feminism, were claiming the subject of their own lives as a vital topic in their art. Exploring the intersection of art and life, Maiwald's early video work of this period focused on loss of innocence. Yet, interlaced with these weighty themes of sex and violence, was a narrative with often comic threads. Moving on to painting, sculpture and installation, Maiwald eventually landed on embroidery as a medium that enabled her to confront social issues in an indirect form. The art of stitching both emblazons and belies her provocative subject matter, permitting time for the powerful meaning of her works to penetrate.

Maiwald's embroidery is not your grandmother's. Her work is iconoclastic. In her new exhibition, Short Stories and Other Embroideries, on view at Guild Hall in East Hampton until January 5, 2014, Maiwald alternately sticks her needle into the heart of political stereotypes or investigates identity and artistic heritage.

Dating back to the 15th century, embroidery was initially employed as a means to reinforce clothing. Traditionally, it connotes safety and domestic security. In Maiwald's hands though -- and with her astute and quizzical eye -- embroidery is a vehicle for exploration and reflection.

Maiwald process begins with a photograph, which she transfers to a drawing and then onto fabric. How she stitches, what colors she uses or how much of the fabric she fills in or leaves open, is completely spontaneous. If other elements are incorporated into the design, these too, are not pre-arranged, but are discovered as the plot line of the piece unfolds for her.

Servitude, a series of 16 handmade miniature maid's uniforms set over table lamps, are all heavily embroidered with the portraits of employers (including Thomas Jefferson and Imelda Marcos) who have mistreated their employees -- the help. A classic, ironic example is the domestic diva, Martha Stewart, famous for lashing out and steamrolling over any in her path to creating her homemaking empire. 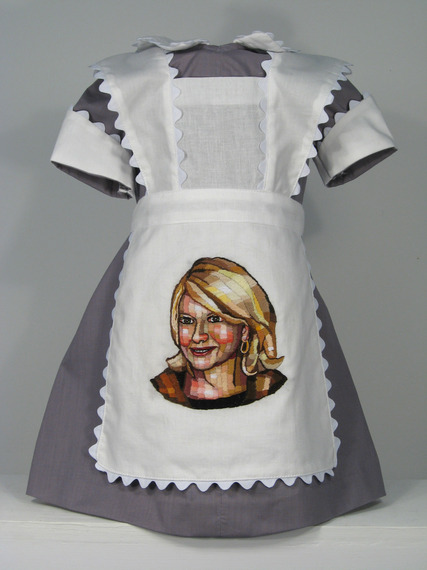 Each new series, Maiwald says, is a reaction to the series that came before. And so the singular images of Servitude gave birth to the multiplicity of her Dictator series. Each of these six canvases is a dense compilation, a multidimensional web of tyranny on a massive scale. This time the abusive behavior is not individual examples, but geographically pinpointed. 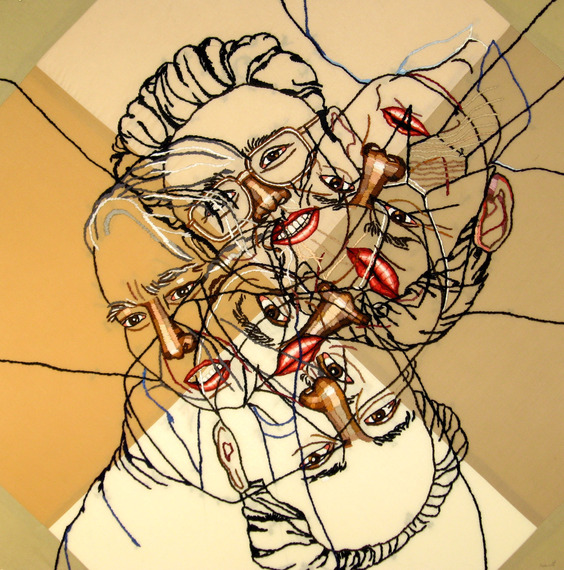 Ranging over the surface of her cotton canvases Maiwald's fragile needlepoints often contrasts starkly with the dramatic topics that she has ripped from the headlines. In the vein of William Hogarth, Maiwald is a modern day political satirist, a graphic artist of the thread.

In fact, much of Maiwald's work has a double edge, mingling innocence with guilt, the domestic with the international. Musical Chairs: Economic Crisis in G Minor is an ironic and biting installation piece that Maiwald created in 2009, during the height of the financial meltdown. Here, faces of the major "players in this Russian roulette of our economy "(Alan Greenspan screaming, Ben Bernanke with his head in his hands) are depicted on seat cushions of brightly colored children's chairs. This birthday party theme of elimination, where one leader randomly replaces another, is an amusing and terrifying metaphor for the instability of our governing system. 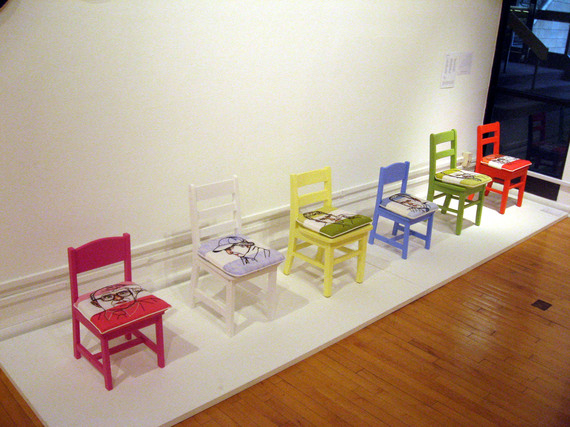 In her most recent series, Maiwald has used her thread as both drawn-line and storyline. Elegantly sewed on white cotton backgrounds that are blocked top and bottom by dark fabric, these are vignettes of artists whom Maiwald admires and credits with influencing her work. In Dancing with Myself, Marcel Duchamp, the Dada iconoclast and father of Conceptual Art, waltzes across a white field with his alter ego, the femme-fatal, Rose Sélavy. In Meet Magritte, the famously reticent artist is seen, side-by-side, with his revealed and erased face. But it is her vision of African-American artist, Kara Walker, that best embodies the complex narrative of Maiwald's style. Kara Walker is widely known for her black and white cut-paper silhouettes, a Victorian medium that Walker employs to approach the nightmarish images of slavery and oppression. In Maiwald's depiction, Walker is seen in white outline as a young, newly discovered artist. On the opposite side of the tableaux, she is a mature artist, in all her colors. In the middle, like a thought bubble, is a recreation of a Walker silhouette in black thread. Embroidery, like the silhouette, lends itself to avoidance of charged subject matter -- yet there it is, all the same. 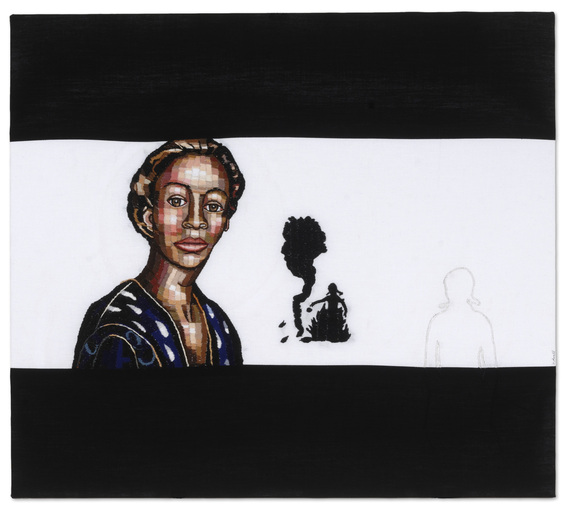 This duality of toughness and delicacy, avoidance and confrontation is at the heart of Maiwald's work. Even her embroidered outlines encompass positive and negative form. Embracing dichotomy, stitch-by-stitch, is finally what lends Maiwald's pieces both their intimate and universal powers.

All images courtesy of the artist and Guild Hall