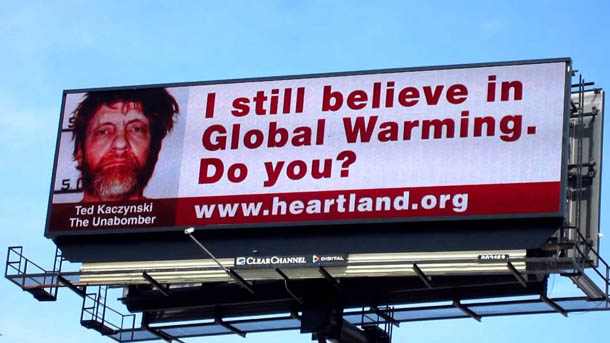 Part 5: Science-Free Zones at the Heartland and Cato Institutes

The Heartland Institute has a long history of peddling half-baked nonsense. Over the years, the group has dismissed the health threat posed by second-hand smoke, ridiculed the evidence for acid rain as "flimflam," and criticized the "hasty phase-out" of chlorofluoro-carbons, which were destroying the atmosphere's ozone layer. More recently, the Economist called Heartland "the world's most prominent think tank promoting skepticism about man-made climate change," and the magazine didn't mean it as a compliment.

Given Heartland's penchant for misrepresenting science, you would think reporters would be curious about who finances its work. You would be wrong.

There were two breaking news stories that provided an opportunity for reporters to disclose Heartland's benefactors during that two-year period, but the news outlets cited funding in only 11 of 54 pieces they ran that mentioned the think tank. That's only 20 percent of the time.

Before the spring of 2012, the Chicago-based group was probably best known as the host of the largest annual international climate contrarian conference. By the end of last year, it was best known for posting a billboard in the Chicago metro area likening climate scientists to Unabomber Ted Kaczynski. The billboard, which Heartland had planned to be the first in a series featuring Osama bin Laden, Charles Manson and Fidel Castro, displayed a mug shot of Kaczynski and the headline: "I still believe in Global Warming. Do you?" The billboard triggered an immediate public backlash, forcing Heartland to take down it just a day after it went up. It also sent a number of Heartland's funders scurrying for the exits.

The billboard fiasco, which happened in early May, came on the heels of another story that put Heartland under the media microscope. Peter Gleick, a climate scientist and president of the Pacific Institute for Studies in Development, Environment and Security, misrep-resented himself to pry fundraising and strategy documents out of an unsuspecting Heartland employee and leaked them to reporters. This time public opprobrium was directed at Gleick for his subterfuge, but given the documents revealed some of Heartland's funding sources, as well as its plans to develop misleading climate curriculum materials for public schools, the story provided an opening for reporters to take a closer look at the group.

The New York Times, which cited Heartland more than any of the other news organizations in my survey, ran 13 stories and blogs on the purloined documents between mid-February and early June. Only two, a February 15 blog by Andrew C. Revkin and a February 16 article by Justin Gillis and Leslie Kaufman, mentioned Heartland's funding. Revkin offered little information, however, writing that Heartland was "backed by industry and independent donors opposed to government regulation."

Gillis and Kaufman provided more detail. "Perhaps the most intriguing aspect of the Heartland documents was what they did not contain: evidence of contributions from the major publicly traded oil companies, long suspected by environmentalists of secretly financing efforts to undermine climate science," they wrote. "But oil interests were nonetheless represented. The documents say that the Charles G. Koch Charitable Foundation contributed $25,000 last year and was expected to contribute $200,000 this year. Mr. Koch is one of two brothers who have been prominent supporters of libertarian causes as well as other charitable endeavors. They control Koch Industries, one of the country's largest private companies and a major oil refiner."

In fact, during the last decade, major publicly traded oil companies have been funding Heartland. If Gillis and Kaufman had dug a little deeper, they would have discovered that ExxonMobil gave Heartland more than $530,000 (2001-2011) while the American Petroleum Institute--the oil and gas industry's trade association--slipped the think tank $25,000 (2008). Two of the Big Three Detroit automakers also chipped in. Chrysler donated $105,000 (2004-2006); General Motors, $165,000 (2004-2010). All had a vested interest in quashing government action on climate change.

The subsequent 10 stories and blogs the Times ran mentioning the Gleick affair called Heartland "libertarian" or "anti-regulatory," but didn't say anything about its funding. Likewise, the five blogs and stories the Times ran on Heartland's Unabomber billboard labeled the group "conservative," "libertarian" or "right wing" and also avoided the funding topic. All told, only five of 22 Times stories citing Heartland over the two-year period I reviewed mentioned the think tank's benefactors.

The Los Angeles Times--the fourth largest paper in the country--ran five articles, one column and one editorial citing Heartland from January 2011 through December 2012. None of the articles mentioned the think tank's funding sources. Reporter Neela Banerjee, who wrote three of them, merely identified it as "conservative."

A February 29, 2012, column on the Gleick controversy by the paper's Pulitzer Prize-winning business columnist, Michael Hiltzik, was the only one of the seven pieces that touched on the funding issue. He called Heartland "a nest of global warming deniers and corporate anti-regulators" and explained that "[o]ver the years its backers have included ExxonMobil and the foundations of the Koch family and Richard Mellon Scaife."

The editorial, which ran on February 20, 2012, didn't cite funding sources, but it ripped the heart out of Heartland. Check out this excerpt:

Leaked documents from the Heartland Institute in Chicago, one of many nonprofits that spread disinformation about climate science in hopes of stalling government action to combat global warming, reveal that it is working on a curriculum for public schools that casts doubt on the work of climatologists worldwide. Heartland officials say one document was a fake, but the curriculum was reportedly discussed in others. According to the New York Times, the curriculum would claim, among other things, that "whether humans are changing the climate is a major scientific controversy."

That is a lie so big that, to quote from Mein Kampf, it would be hard for most people to believe that anyone "could have the impudence to distort the truth so infamously." On one side of the "controversy" are credentialed climatologists who publish in reputable, peer-reviewed scientific journals and agree that the planet is warming and that humans are to blame; on the other are fossil-fuel-industry-funded "experts" who tend to have little background in climatology and who publish non-peer-reviewed papers in junk magazines disputing established truths. These are quickly debunked, but not before their findings have been reported by conservative blogs and news outlets, which somehow never get around to mentioning it when these studies are proved to be badly flawed.

Despite the fact that the Los Angeles Times only mentioned Heartland's funders in one of seven pieces, it did the best overall job of any of the general interest news organizations in my survey, mentioning the Oil Eight's benefactors 44 percent of the time. Only Politico, a narrowly focused political trade publication, did as well.

The Times track record outing climate contrarian funders may be in jeopardy, however. Koch Industries is reportedly considering buying the newspaper and its parent Tribune Company's seven other regional papers, which include the Chicago Tribune, Baltimore Sun, Orlando Sentinel and Hartford Courant. If that happens, Hiltzik and Los Angeles Times Editorial Page Editor Nicholas Goldberg both better look for a new job.

Another Oil Eight member, the Cato Institute, also has long disparaged environmental and public health safeguards. Over the years, its "scholars" have argued that the science behind the worldwide ban on chlorofluorocarbons was "distorted, even subverted"; that concerns about lead, asbestos, radon and other dangerous substances amounted to "hysteria"; and that government efforts to curb carbon emissions would be too expensive, ineffective and unnecessary.

The Cato spokesman who scoffed at the chlorofluorocarbon threat was Patrick Michaels, who now runs the organization's Center for the Study of Science. Although Michaels has a doctorate in agricultural climatology and spent much of the 1980s studying crop climate sensitivity, by the 1990s he was editing a coal industry-funded quarterly newsletter, World Climate Review, which attacked mainstream climate science; and by August 2010, Michaels estimated that 40 percent of his funding came from the oil industry. 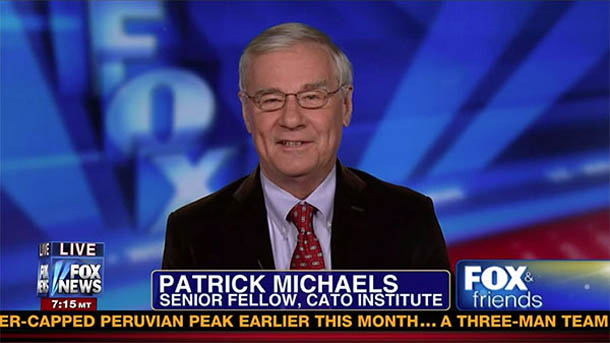 Given Michaels is one of only a handful of bona fide climate scientists who buck the prevailing view that manmade global warming poses a serious threat, he moonlights as an adviser to other ExxonMobil- and Koch-funded think tanks. Those groups include at least three other Oil Eight members, the Competitive Enterprise Institute, Heritage Foundation and Heartland Institute, which commissioned Michaels to speak at four of its annual climate-science bashing conferences.

Instead of publishing studies in peer-reviewed science journals, Michaels writes opinion columns for the Washington Times and Forbes. It was in the Times where Michaels made his specious arguments against banning chlorofluorocarbons, and that's where he claimed earlier this year that the world's average temperatures have been "flat" for nearly two decades.

"My greener friends are increasingly troubled by the lack of a rise in recent global surface temperatures," he wrote on January 17. "Using monthly data measured as the departure from long-term averages, there's been no significant warming trend since the fall of 1996. In other words, we are now in our 17th year of flat temperatures."

The Washington Times op-ed wasn't the first time Michaels has made this baseless assertion. He told USA Today's weather and climate reporter Doyle Rice essentially the same thing for a January 13, 2011, story reporting that 2010 tied with 2005 as the world's warmest year since 1880. Rice first quoted David Easterling, chief of scientific services at the National Climatic Data Center, who said, "This warmth reinforces the notion that we're seeing climate change." Rice then quoted Michaels:

Pat Michaels, a climatologist with the Cato Institute in Washington, disagrees. "If you draw a trend line from the data, it's pretty flat from the 1990s," he says. "We don't see much of a warming trend over the past 12 years."

He says gloom-and-doom projections are likely to be too hot. "The projections will have to come down," Michaels says.

Doyle could have explained that Cato received $110,000 from ExxonMobil (2001-06), $95,000 from General Motors (2003-09), and $2.79 million from the three main Koch family funds (2001-10) over the last decade. Mentioning that Koch Industries owners Charles and David Koch founded the think tank in the mid-1970s and sit on its board also may have helped clear up any confusion about Michaels' agenda: The fossil fuel industry pays him to sow doubt about climate science.

USA Today published three other climate and energy stories citing Cato during the two-year period I reviewed. Those articles merely described the think tank as "libertarian" and, like Doyle's story, failed to cite its funders. But USA Today was not alone. Altogether, the eight news organizations I tracked disclosed Cato's funding in only two of the 21 climate and energy stories they ran mentioning the think tank in 2011 and 2012. That means they failed 90 percent of the time to explain whose interests Cato serves--and it's definitely not the public's. #

On Friday, this six-part series, "Unreliable Sources: How the Media Help the Kochs and ExxonMobil Spread Climate Disinformation," will conclude by looking at journalists' explanations for why they leave out climate contrarian funding data and offer recom-mendations for how they could do a better job.