The three-year old Youth Symphony Orchestra of the Commonwealth of Independent States (CIS), conducted by renowned maestro Vladimir Spivakov, ended its program in the 2,000-seat UN General Assembly Hall with the Sousa's Stars and Stripes Forever, played in precise marching cadence. Since it was not listed in the program, few among the largely Russian-speaking audience recognized it.

But it followed the familiar Victory Day song (written 30 years after the end of World War II) which brought the audience to its feet, clapping in unison while archive film of Soviet celebrations at Nazi Germany's surrender in May 1945 flickered on two screens. War-time leader Josef Stalin was not mentioned.

Not all the numbers were from another era. The concert opened with a tribute to the Holocaust: the theme by John Williams from Schindler's List.

Russia had spent a week organizing exhibits and other events to commemorate the 65th anniversary of the end of World War II in Europe when Germany surrendered in May 1945. (Victory Day in the former USSR, Victory in Europe Day in the United States)

The Russians have used the 65th anniversary to include Western and other nations in its celebrations and make the point that the Soviet Union lost 20 million people in the war, far more than its allies. On Sunday in Moscow, Russia made the unusual gesture of inviting American, British French, Polish and other foreign troops to march in the victory parade in Red Square, a first.

The UN events ended on Friday with the concert by the youth orchestra that Mikhail Shvydkov, co-chair of the foundation that supports the orchestra, said was for the families of ordinary people who won the war. (Ironically it coincided with the first week of the nuclear non-proliferation conference that saw countless Japanese recalling the devastation of Hiroshima and Nagasaki in August 1945.)

The classics began with out of sync brass in Rachmaninov's piano Concerto No. 2, despite the excellent playing by a professional pianist, Denis Matsuev, 35. However, the subsequent numbers grew more spirited and precise through eight excerpts from Tchaikovsky's Nutcracker and Swan Lake ballets, although the occasional horn blasts made it difficult to envision a ballerina. But the trumpet solo was marvelous.

Two numbers not on the program included a small youth delivering a virtuoso xylophone performance of Rimsky-Korsakov's The Flight of the Bumblebee that brought down the house. So did a wonderful rendition of Lezginka, a boisterous dance in a raging tempo, drums ablaze, that is popular in the Caucasus mountains and beyond.

Baltics Balk But the no UN event is without politics. Russia's UN ambassador, Vitaly Churkin, told reporters on Thursday after 30 nations, including Germany, spoke at a commemoration, that some "countries in Europe" did not allow Soviet veterans to wear their decorations.

Presumably he was speaking of Latvia and Estonia, occupied by force by the Soviet Union during and after the war. Parades in honor of Waffen-SS veterans are held annually in the two Baltic states. Churkin said people had to learn that if the Nazis had won, the future of civilization would have been different because "racism and national annihilation would have triumphed."

Conductor Spivakov, born in 1944, had a different story to tell. His father volunteered at the Ukrainian front but was injured and sent to Ufa near the Ural mountains to work in a factory that made engines for bombers. His mother lived through the siege of Leningrad - and some members of his family died in the Dachau and Auschwitz concentration camps, he told a news conference.

Many years later, he was asked to conduct the Moscow Symphony Orchestra in Dachau (no date given) and initially refused because "it felt as if I was having a number tattooed on my forearm." But he did go and played Shostakovich, which was received in a "cosmic silence" by his German audience. He then conducted Bach and said members of the audience stood up and cried and he felt he "was part of the universe" again.

What he did not relate but is revealed in media stories is that Spivakov, already a famous violinist, created the Moscow Virtuosi chamber orchestra in 1979 but found that after the fall of the Soviet Union life was untenable for many orchestra members. In the turmoil Jews became scapegoats. He moved the musicians and their families to Spain. They returned home in the late 1990s.

The youth orchestra is funded by the Intergovernmental Foundation for Educational Scientific and Cultural Cooperation, supported by CIS states. It performed for the first time in November 2007 amd includes 98 musicians from 11 countries. On Friday, some 80 musicians, 50 of them on string instruments, played. The youngest was 15, the oldest 30. 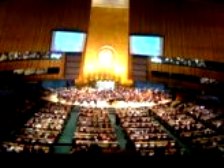