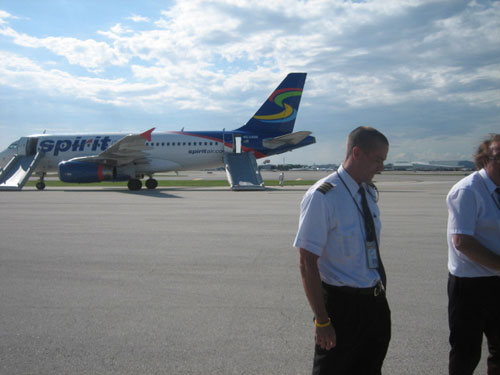 I'll never fly Spirit Air again -- and not just because the planes are filthy and they charge for bottled water, or even that I could see the air conditioning being piped in as if it were a fog machine on a dance floor.

I'll never fly Spirit Air again because I had to take the electric slide off the plane.

Last Sunday, I was returning to L.A. from a vacation in Cartagena with my boyfriend. We had a layover in Ft. Lauderdale. As our plane was descending there, we smelled acrid smoke. I remember putting my sweater over my mouth and thinking, this can't be good for anyone. When the plane touched down, some passengers started to get up. A flight attendant got on the intercom and told everyone to sit back down and await further instructions. Then, the pilot's door opened up and the flight attendant got back on the intercom and yelled "Evacuate! Evacuate! Evacuate!"

People started to panic, heading for the exits. Another flight attendant stopped people heading for the front of the plane, yelling at them to go the other way as if she had seen flames by the front exit (more than a few passengers thought that was the case). People were grabbing their bags, which the flight attendant at the back exit would grab out of their hands as he yelled, "Leave your bags! Get away from the plane!"

I jumped a bit and slid down the slide--I thought I had read somewhere to do that and no one was giving any instruction. I was going so fast someone at the bottom yelled "Slow down!" as if I could do anything mid-slide.

If only any person of authority had calmly given passengers instructions, maybe
three people wouldn't have been spirited away in ambulances for injuries on the slide. Others were bruised and cut, some were crying. After explaining nothing to us for about half an hour, we were bused to customs. Then we were held in the baggage check area to be interviewed about the incident and to wait for our bags. Various Spirit Air employees kept yelling at everyone to not use phones or laptops at all, even though passengers were shaken and wanted to talk to their families--particularly to say they were okay if the emergency evacuation made the evening news. (It did).

Also, most people on the plane had connections to make that they were likely going to miss, and they wanted to make plans. (The next day was Memorial Day and we feared it would be days before we got home if we left travel arrangements to the airline). Everyone was also really hungry, but they just brought out some bottled water after much complaining. At no point did anyone explain what had happened, when we may get our bags, or what to do about our connections.

Spirit Air ended up issuing us a refund for the trip from Cartagena to Ft. Lauderdale and giving us a free travel voucher -- which I can vouch that I will never use. Oh, and by the way, the exact same thing happened on a Spirit flight landing at the same airport a year ago.

I guess flights are like sushi: you really don't want the cheapest option.