Haiti's 1.5 million homeless have once again become invisible. Because they are not seen or heard in mainstream media, most people assume things are improving, the problem solved.

Unfortunately they are wrong.

While it goes unseen, and therefore the U.S. Congress is not being pressured during this midterm election season to end the deadlock that is holding up 1.15 billion dollars in promised aid to Haiti, the situation remains quite urgent.

I ended my last posting -- while finishing a study on the camps for 1.5 million people made homeless by Haiti's earthquake -- by asking: like the thousands who are contemplating moving back into their damaged homes, are Haiti's 1.5 million IDPs just falling through the cracks, or is the foundation itself unsound? 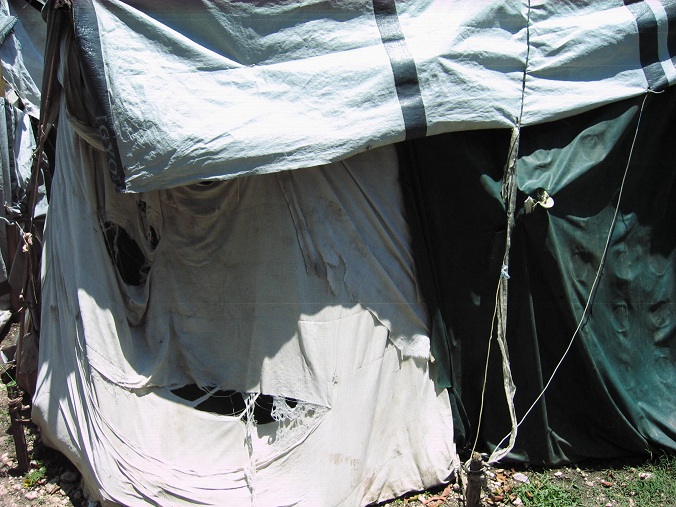 Unfortunately the answer is that the foundation itself appears to be unsound.

The report, based on six weeks of on-the-ground research, is now finished and available online. With a team of eight students and a colleague at the Faculté d'Ethnologie, Université d'État d'Haïti, this study covers over 100 camps for internally displaced persons (IDPs), a random sample of one in eight of the 861 in the metropolitan area. Students conducted quantitative and qualitative surveys in three inter-related areas: conditions and services within the camps, residents' level of understanding and involvement in the camp committees, and interviews with committee representatives. I personally visited 31 camps. 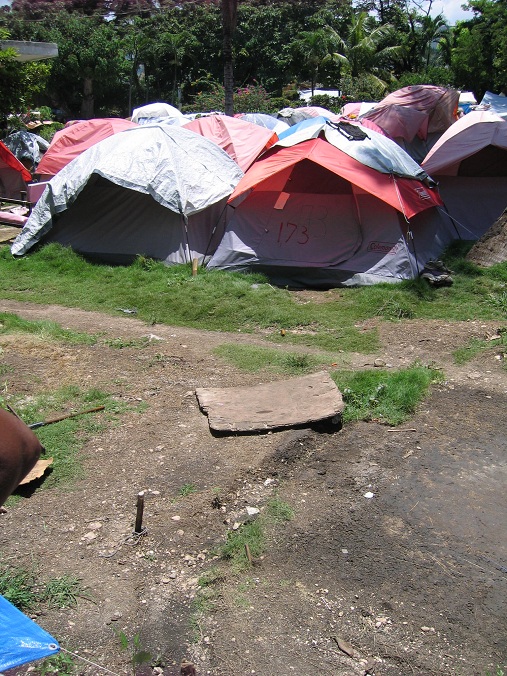 The results show that despite the billions in aid pledged to Haiti, most of the estimated 1.5 million IDPs are living in substandard conditions. For example, seven months following the earthquake, 40 percent of IDP camps did not have access to water, and 30 percent did not have toilets of any kind. An estimated 10 percent of families have a tent; the rest sleep under tarps or even bed sheets. In the midst of the hurricane season with torrential rains and heavy winds a regular occurrence, many tents are ripped beyond repair. Only a fifth of camps have education, health care, or psycho-social facilities on site.

The services provided in the camps vary quite significantly according to a range of factors. Camps in Cité Soleil have almost no services, while those in Pétion-Ville are better managed. Camps that are not on major roads or far from the city center in Croix-des-Bouquets or Carrefour have little to no services. Smaller camps, with 100 or fewer families, have demonstrably fewer services. Camps situated on private land -- 71 percent of the sample -- are significantly worse off than those on public land.

Despite the fact that many NGOs empower camp committees to select recipients and distribute aid -- most notably food, until the government stopped general distribution in April -- most official committees do not involve the population. Less than a third of people living in camps are aware of the strategy or even the name of the committees. Two-thirds of members are men, despite well-documented concerns about gender-based violence. While to most NGOs managing camps or offering services these camps represent their "local participation," it is clear that the present structure leaves much to be desired.

While many committees sprang up organically immediately following the earthquake as an expression of solidarity and unity in an effort for survival, NGOs' relationships with them have several negative intended or unintended consequences. First of all, most NGOs did not inquire about local participation, leadership, needs deliberation, or legitimacy. As a result, in several cases, the NGOs and self-named committees excluded pre-existing grassroots organizations. Some NGOs, the government, and even the land owners themselves created these committees. This is a root of several conflicts. In the majority of cases, the camp committees -- who were active in the immediate aftermath of the earthquake -- report not doing anything because of lack of funds, testifying to an increasing dependency on foreign aid.

Security -- including theft, gender-based violence, and forced evictions from private landowners -- remains urgent. The issue of forced eviction is greater than generally acknowledged; of the initial sample, 19 of 106 -- or 17 percent of camps -- had been closed. Research assistants found an additional fourteen camps that were either closed or under threat of closure. This is a violation of residents' rights as granted by international conventions. This issue is likely only to heat up given the election season and the government-imposed deadline of December to close the camps.

These failures are not isolated incidents but symptoms of larger structural problems that require immediate, sustained, profound reflection and attention. Solutions include involving IDP populations in large community meetings, assessing levels democracy and participation within committees, greater NGO accountability, coordination, and submission to a fully-funded local and national government. Housing needs to be recognized as a human right (guaranteed by Article 22 of Haiti's constitution), with concrete, immediate steps to empower people to return to a safe home and basic services (e.g. water, sanitation, health care, and education) made available to all, regardless of residency status. All of these require the immediate release of pledged aid, the vast majority of which has failed to materialize.

It is not too late to rebuild on solid foundations. Specific policy recommendations include:

1.Donors such as the U.S. and U.N. should focus more funds and rebuilding efforts at rebuilding the capacity of the elected Haitian government, and not simply NGOs.2.All NGOs working in Haiti need to work with the Haitian government and respect the local authorities.3.All NGOs working in Haiti need to have an active and robust participation of impacted residents. This needs to specifically include regular, general, public, "town hall" meetings in the camps and other impacted communities.4.NGOs should specifically encourage under-represented populations, particularly women, and pre-existing grassroots groups.5.NGOs should assess the official committees and support those who are doing well in transitioning toward greater autonomy, offer training to mid-range groups, and engage lower-functioning groups in dialogue with the general population.6.Provide support for education at all levels, including popular education about IDP rights.7.Provide more security, particularly for women, including an indefinite end to forced evictions until a sufficient amount of permanent housing is available.8.Provide services in the neighborhoods as well as the camps.9.All parties: the Haitian government, NGOs, and donors, need to make the expedient construction of high-quality permanent housing its first priority.10.Fully fund Haitian relief efforts.

Progress on ALL of the above is stymied by the slow delivery on promised aid.

A September 28 AP article cited that only 15 percent of promised funds have been released. Disturbingly, NONE of the promised 1.15 billion in aid from the U.S. has materialized. According to Katz, Senator Tom Coburn has blocked its passage in the Foreign Relations Committee because of a $5 million line-item that appears to duplicate the structure of the U.S. Ambassador in Haiti. Quick action must be taken to rectify this while Congress is still in session, before they break for mid-term elections.

The voting public must seize this opportunity of increased visibility during election season to push the passage of this 1.15 billion in aid. As this report and very many others like it ( for example, "Our Bodies Are Still Trembling," "We Became Garbage to Them," and "We Have Been Forgotten") amply document, the crisis is far from over and the situation remains quite urgent. We should follow up our unprecedented generosity by keeping our promises to our long-standing neighbor.

It is not too late to rebuild, but we need to rebuild on solid foundations. It is possible if we act now. Our conscience should allow no less.

Mark Schuller is Assistant Professor of African American Studies and Anthropology at York College, the City University of New York. He is the co-editor of Capitalizing on Catastrophe: Neoliberal Strategies in Disaster Reconstruction.