Glaciers in West Antarctica have gone into unstoppable, irreversible retreat. What does this mean? How frightening is it?

Key to understanding what's happening here is a term called the "grounding line." It's the point on the underside of the glacier where its base loses contact with the underlying ground. From that point downstream, the glacier is floating on the surface of the ocean. For glaciers on the Amundsen Sea that the West Antarctic Ice Sheet, their grounding lines are steadily progressing inland. 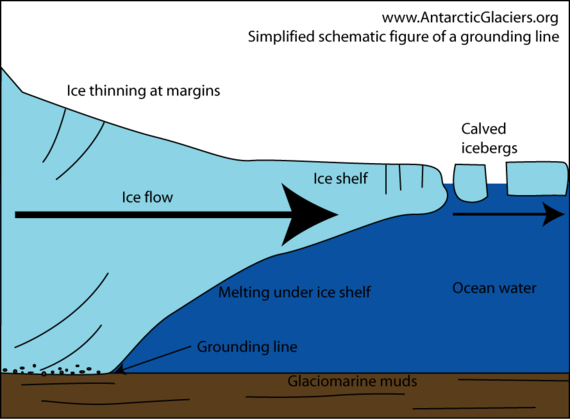 Why is this bad? For two main reasons: One, this means more of the bottom of the glacier is exposed to ocean water. It's this relatively warm ocean water (yes, still really cold, but warmth is relative in Antarctica) that does the best job of melting the glacier and turning that ice slowly but surely into sea level rise. Two, the really scary part about the grounding lines' inland migration is that it's not even moving inland -- there is no land here for the glacier to retreat onto.

That's right -- the bottom of the West Antarctic Ice Sheet sits, essentially, on the ocean floor. From the point where these glaciers' grounding lines are now, the seafloor actually slopes downward as you move up the glacier. This is why the demise of these glaciers is irreversible or "past the point of no return," according to lead author of the study, Eric Rignot. There is nothing stopping the ocean from continuing to eat away at the base of these glaciers and emptying that volume of ice into the ocean, eventually raising sea level by at least 4 feet. Not this year or even this century, but eventually over the next few hundred years.

How does a glacier, or a huge ice sheet like West Antarctica, end up sitting on the sea floor? Well, it wasn't always this way. Originally (Two million years ago? Half a million?), the West Antarctic Ice Sheet did begin its life on land, with layers of snow falling every year, never melting, and eventually stacking up to form the world's tallest layer cake. But this layer cake is SO big that it actually pushed down the Earth's surface underneath it and that's how its base ended up hundreds of feet below sea level. I tell you -- science is amazing.

Because its base is so far below sea level, scientists have had their eye on West Antarctica for a long time. (This is one of the reasons the ice-core drilling project I worked on in Antarctica in 2008 was located at the top of the West Antarctic Ice Sheet. Scientists want to know all they can about this unstable giant.) The glaciers reported on in this study are only one piece of West Antarctica -- the piece that's emptying into the ocean the fastest. But they are connected to the rest of the ice sheet and there's every reason to believe that if this demise is truly unstoppable, it will not be limited to the four feet of sea level rise contained within this region. According to author Rignot, "Its retreat will also influence adjacent sectors of the West Antarctic Ice Sheet which could triple this contribution to sea level."

What does this mean? A 10-foot rise in sea level would be catastrophic for the U.S., as illustrated in this recent Climate Central article and graphics. The U.S would lose almost 30,000 square miles of land and displace 12.3 million people. New York City would be hardest hit. 700,000 people there live within 10 feet of current sea level. 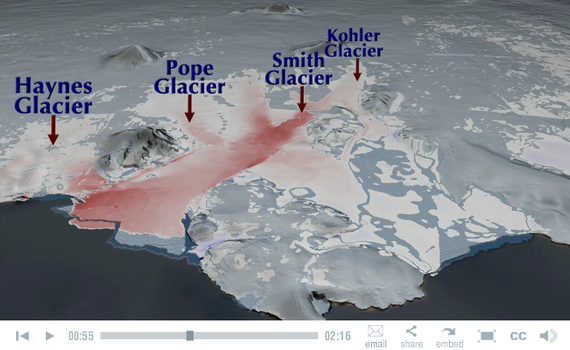 To accompany this study, NASA has also put out a video, with helpful graphics of what a grounding line is and how the seawater around Antarctica is eating away at its glaciers. What I was most struck by, however, was the aerial footage of these glaciers -- they are huge, stunning fields of ice and crevasses, with no outward sign that they're creeping slowly towards eventual collapse. They look beautiful, healthy, and incredibly COLD -- how could they be melting? I recall this from my own experience there as well -- endless ice as far as the eye can see, vast and completely frozen. No sign of global warming here.

For me, this gets at the fundamental problem with addressing climate change: the discrepancy between what our eyes are telling us and what we know from the research that we just can't see -- under the ocean, in the atmosphere, across huge regions too big to comprehend visually. If we don't see climate change in front of us -- in heat waves, wildfires, droughts, or air pollution -- it's dangerously easy to brush it off as something to deal with another day, another year, another generation.

And so, without our even knowing it, at some unnoticed point in the past few decades, these glaciers on the Amundsen Sea quietly crossed over their tipping point and began their inexorable decline. How could we have known, with their melt hidden below the surface? Only after 40 years of data-gathering can we see in hindsight what we missed.

That's often how the climate system works -- not on convenient human timescales that we can see from day to day, not always in super events like Hurricane Sandy that smack you in the face to wake up, but stealthily, in the background, without fanfare but unrelenting. How many other tipping points are slipping past us right now that won't be discovered until it's too late?