After more than forty-five years as a public servant and entrepreneur, Dr. Gloria Herndon has lived a notable life worthy of appreciation. Dr. Herndon was born to a father whose own parents were a sharecropper and a midwife. Her businesswoman and activist mother's parents were self-liberated slaves. Raised as one of fourteen children, Dr. Herndon grew up in a household that valued education, community involvement and spiritual engagement through the church.

As a child, Gloria played a role in the integration of her racially segregated junior and senior high schools. During these formative years, she felt called to greater tasks and eventually became determined to attend Johns Hopkins University and become a global change maker.

Despite her humble beginnings, she set forth to pursue a passion for African advancement. Early on, she believed in the power and potential in this world region that was so often mistakenly viewed as helpless and beset with a plethora of negative political, social and economic issues. Undaunted by these unflattering viewpoints, Dr. Herndon saw a vision of Africa beyond demeaning stereotypes and inaccurate generalizations. Steadfast and determined in her quest, she left the Midwest and her family to embark on a journey that led to her acquiring a Bachelors Degree in Political Science, a Masters Degree in International Economics and Law, and finally a Doctorate at the highly regarded Johns Hopkins School of Advanced International Studies (SAIS).

The education Dr. Herndon received allowed her to begin a career as a diplomat with the State Department. Through her job postings at the U.S. Embassies, she came into contact with many heads of states and key policy makers during a very crucial and exciting era in African history and leadership. She witnessed economic growth, independences and coups. As an internationally known economist, as well as the youngest and first ever black, female economic counselor to Nigeria, Dr. Herndon often found herself called upon to mediate disagreements concerning how to create the catalysts for establishing economic bridges between the USA and Africa. Her efforts were instrumental in the founding of the American-Nigerian Chamber of Commerce. She is still often called upon for advice by many heads of state and governmental officials. 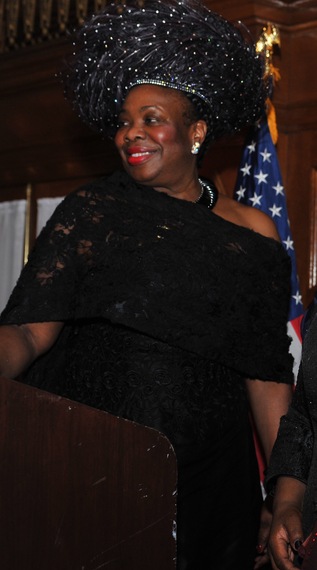 Subsequent to her leaving the State Department to embark on a new path, Dr. Herndon founded an insurance brokerage firm that achieved its success by developing medical coverage plans for underserved or overlooked markets. Her early clients included many of the African embassies in Washington, DC, who previously had difficulty obtaining coverage. She literally created the market for insuring foreign government-sponsored students attending university here in the U.S. That program led her to also develop an affordable medical plan specifically for students attending the Historically Black Colleges and Universities (HBCUs) and, eventually, expanded to include community college students as well.

This marked the beginning of Dr. Herndon's now two decade long relationship with the HBCUs and related organizations and exemplifies her commitment to finding a way to open the doors of opportunity. In recent years, Dr. Herndon served as an advisor to former Malawi President Joyce Banda. President Banda aptly described Dr. Herndon's focus by saying, "While I was President, I teamed up with Dr. Gloria Herndon to find support for the cure of cervical cancer in Malawi. Dr. Gloria Herndon has lived her entire adult life totally committed to the transformation of poor communities in Africa and America."

Moreover, her business efforts and products have always embodied every aspect of social entrepreneurialism. She has worked to provide affordable medications and clean water to African communities, create environmentally friendly solutions to energy and lighting challenges and aid real estate development in underserved communities. Dr. Herndon believes, "My work has always brought me into direct contact with the people I serve. I hear their stories and through the work that I do I am able to advocate for them and bring solutions that make some aspect of their lives at least a little bit easier."

While most of Dr. Herndon's peers are enjoying retirement, she continues working to revolutionize Africa through social entrepreneurialism, bridging lessons from the past with realities of today to offer solutions for the future. In 2013, she established GB Group Global, which acts as an umbrella company to all the other GB companies, including GB Pharma Holdings, GB Energie, GB Energie LED and GB Oncology & Imaging. All social give-back programs in education, health and municipal programs are centered under GB Group. GB Group also hosts the Annual GB Group Global Awards to recognize successful aspects of African Leadership that are often overlooked.

GB Group Global's Chief Operations Officer, Dr. Estelle-Marie Heussen, says, "Our Pharma company [GB Pharma] which provides accessible, holistic solutions for critical health issues gives back [to African communities] not only in training and building of local capacity, but also contributes 20% of its proceeds to GB Oncology & Imaging Group for the purposes of implementing best practices in the treatment of cancer and other non-infectious diseases." Dr. Herndon's dedication to the Pharma sector is targeted to contribute to the process of enabling a strong, healthy population. One way in which GB Pharma is leading in health solutions is by providing access to innovative and cost effective immune therapy such as Low Dose Naltrexone [marketed as Lodonal]. Recognizing the potential impact Lodonal could have in facilitating better health for its populace, the Nigerian regulatory body [NAFDAC] has provided approval for a 90-Day bridging trial, which GB Pharma will be conducting in collaboration with its partners Immune Therapeutics Inc. and AHAR Pharma.

Dr. Herndon's belief is that health security is foremost for any nation that embarks on implementing strategic economic and development policies. Dr. Herndon has had many ups and downs; through it all she has remained a pioneer and has handled her challenges with grace. Her work is an example of what one can do with the power of will and a determination to not live for one's self but for others. To live a full life on this Earth is to use the time you're given to make a real change.

How will you choose to live today?