Unthink has four words for Facebook: "The jig is up."

The new social networking site seeks to unseat the likes of Twitter, Google+ and Facebook with a premise that bucks convention in the web world: giving users complete control over their information and not letting advertisers get at it.

The site, branded as the "anti-Facebook," bills itself as an "emancipation platform" for people who want to be social online, but are frustrated by unfavorable privacy policies, in-your-face advertising and unexpected updates that keep them scrambling to protect their information. Since launching in beta on Oct. 25, Unthink has registered over 100,000 new members.

To Unthink CEO and founder Natasha Dedis, Facebook is "a place that looks like a palace, but in which users are slaves." Unthink, she counters, is "a promised land that [users] own and can build what they want to build."

The site traffics in the language of revolution and Dedis says she is on a mission to radically transform how people interact and share online. On Unthink, technical features are overshadowed by ideology. Though the functionality of the site remains limited, borrowing elements of Facebook and Twitter, it has grand ambitions of overtaking Facebook by delivering a social sphere that vows to respect the wishes and privacy of its users.

Dedis is not the typical tech entrepreneur. Raised between Charlotte, N.C., and Athens, Greece, Dedis said she was orphaned at 17; took over her father's finance, dry cleaning and real estate businesses; and became an entrepreneur at 21. Her LinkedIn profile lists a slew of CEO positions, including two years at the helm of TAMKO International Corporation, a year as CEO of GRAFTS S.A., and 8 years as chief executive of Dynamic Life S.A., which oversaw a network of gyms and was delisted from the Athens Stock Exchange in 2006.

"I go into any industry I see where the consumer has been mishandled, and it's my passion to set it right," said Dedis, a self-described "CEO-activist." "People need to take control of the global communication system and take down the big corporations that are controlling them, telling them what to do, and which are literally arrogant."

The idea for a privacy-centric social network came to Dedis four years ago when her son, then 12 years old, petitioned to join Facebook. Concerned by the site's policies, which she considered exploitative and arrogant, she set out to build an alternative. Three years and $2.5 million in funding later, Unthink has arrived.

The world's biggest Internet behemoths have made billions selling online ads that target users based on information collected -- sometimes covertly -- about their browsing habits. This personalized advertising has been the backbone of companies like Facebook and Google, but Unthink abandons the approach altogether. Instead, the site lets people pick who gets to market to them and vows to shield its members' data from advertisers. The social network promises, "No ads. Not now. Not ever" and says in its "deed" that users will remain "undisturbed by ads or spyware."

In place of traditional advertisements, Unthink invites users to choose a brand "sponsor" that will cover the costs of maintaining their profile in exchange for being showcased on their page. Users who prefer to keep businesses off the profiles Unthink calls "suites" can do so by paying $2 a year. The social network is further rethinking relationships with brands by allowing users to receive loyalty rewards when they subscribe to receive updates from businesses. The feasibility of this unorthodox business model remains to be seen and brands have not yet been admitted to Unthink.

The site's profile design also puts privacy at the forefront. Whereas Facebook automatically makes some information on new profiles public, suites on Unthink will be private by default, viewable only by the account owner until she manually adjusts her privacy settings. In addition, Unthinkers can create three different profiles -- each with their own photo and personal information -- that serve as customized public faces to friends and family, brands and professional contacts.

Yet Unthink is defined as much by the values it espouses as its technical features, which remain bare-bones at best and frequently buggy.

The social network offers pages upon pages of deeds, covenants, manifestos and principles that spell out guidelines for the new online community. Unthink's narrative weaves a tale of uprising, revolt and liberation, casting Facebook as the evil overlord and Unthink as the savior of a populace held captive.

In its deed with Unthinkers, Unthink describes Facebook as a "cyber-monopoly" with a "history of arrogance" that is guilty of "repeated exploitation of the people."

"Its dictatorship must end," the deed reads. "The time has come for the people to rise up and declare their emancipation."

Unthink's manifesto exhorts its users to live by 18 principles, such as "never negotiate any freedoms," "look for the angel in every person," "elevate your attitude" and "dream big."

To Dedis, the David and Goliath dimension to the competition between Unthink and Facebook has the potential to both transform social media and the nation's economic crisis by offering a model for people frustrated by ineffective leadership in business and politics. Dedis said she aspires to see others follow Unthink's lead and challenge existing institutions.

"To us, it's a bigger issue. It's not about social media. It's about how we get out of this global crisis," said Dedis. "We the people have to tell 'experts' what to do. So let's start with social media, win this battle and feel like we're powerful."

CNN, for one, drew parallels between Unthink and the Occupy Wall Street movement, as both challenge corporations, politicians and people to remedy a broken system. Though Dedis notes that Unthink, like Occupy Wall Street, stems from a dissatisfaction with the status quo, she says the site's launch was not timed to coincide with the movement and argues that people should offer up solutions themselves, rather than calling on political leaders to provide them.

"People are feeling more and more helpless watching how politicians, Wall Street and all the other structures around us aren't working. Everything is malfunctioning. We normal people feel helpless," she explained. "If Unthink can win, it's a win for every single one of us. People will see we don't need to wait for anyone to save us. We can save ourselves. We want to give people hope that each one of them -- each one of us -- can make a difference."

In the days following its launch, Unthink received more traffic in a day than the company expected to see in a month, according to Dedis.

Dedis' son initially refused her offer to create an Unthink email address, but is now one of the site's new members.

"Nobody in his school thinks Facebook is cool," she said.

Unthink, The 'Anti-Facebook,' Wants To Free You From Social Networks' 'Dictatorship' 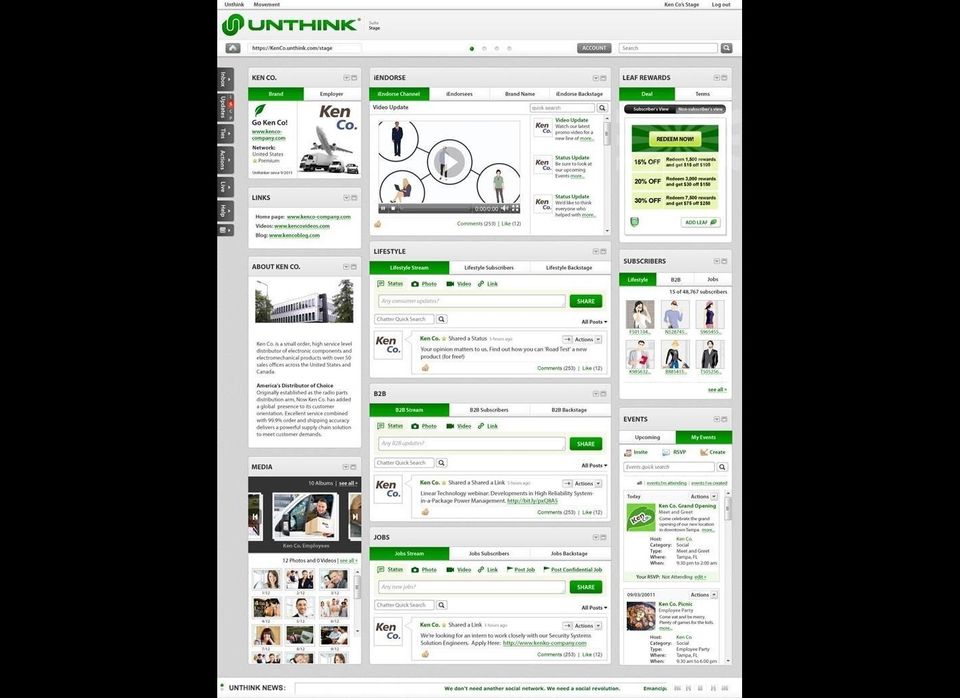