Aroon Shivdasani, Executive and Artistic Director of the Indo-American Arts Council (IAAC), did not sleep much last month - though she seldom does. 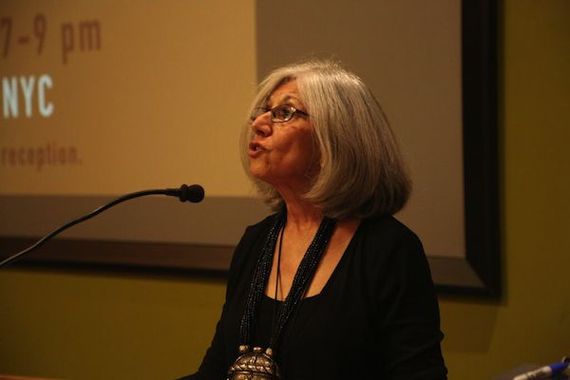 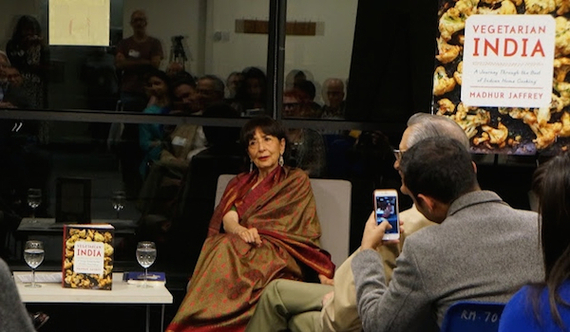 Madhur Jaffrey is the author of many previous cookbooks, six of which have won
the James Beard Award. She was also named to the Who's Who of Food and
Beverage in America by the James Beard Foundation. Photo: Sangeeta Jain.

The Festival kicked off with veteran cookbook maven, actor, and director Madhur Jaffrey. Madhur's latest book, Vegetarian India, is a kitchen essential for vegetable enthusiasts and home cooks everywhere. This award-winning food writer and actress has won numerous accolades in theater and film, as well as for her food. Six of her cookbooks have won the James Beard Award for Food and Beverage in America. 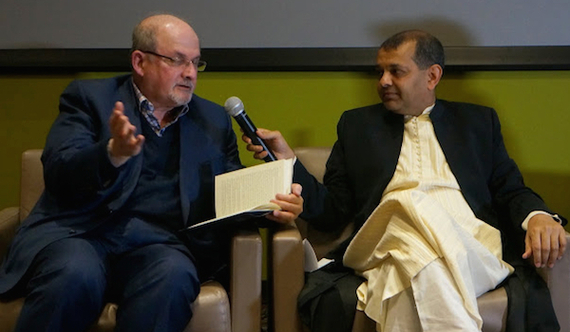 Opening Night featured Sir Salman Rushdie and Suketu Mehta engaging in conversation as 'Bombay Boys in New York.' Both authors have written extensively about both cities -- the fecund and the dazzle -- cities which aren't typical of either of the two countries they inhabit.

Salman is the author of twelve novels: Grimus, Midnight's Children (awarded the Booker Prize in 1981), Shame, The Satanic Verses, Haroun and the Sea of Stories, The Moor's Last Sigh, The Ground Beneath Her Feet, Fury, Shalimar the Clown and The Enchantress of Florence, Luka and the Fire of Life, and his latest book which he autographed for me, Two Years, Eight Months and Twenty Eight Days. 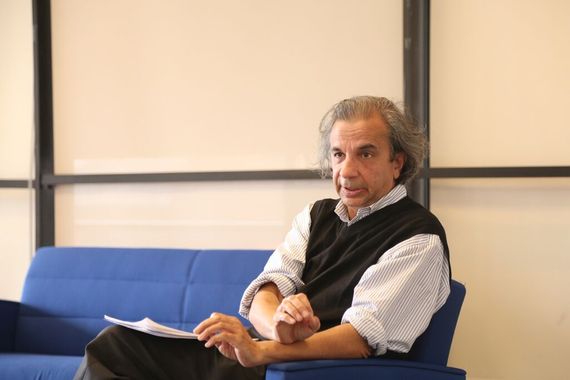 Suketu wrote Maximum City Bombay Lost and Found and is currently writing a book on New York in the same vein. Salman has referenced and set several of his novels in Bombay and his current book Two Years, Eight Months and Twenty-Eight Nights opens in New York with a trip to Bombay. Suketu's work has been published in The New Yorker, The New York Times Magazine, National Geographic, Granta, Harper's Magazine, Time, and Newsweek, and has been featured on NPR's 'Fresh Air' and 'All Things Considered.'

This second festival offered powerful breakout sessions on myriad literary genres: two foodie panels with Padma Lakshmi and a host of New York chefs whose books are flying off the shelves; two panels on Islamophobia - one discussing books on the subject and the other with Mahmood Mamdani and Akeel Bilgrami on the critical issue of refugees, migrants and terrorists; and a panel zeroing in on Quantico by two writers from that show. 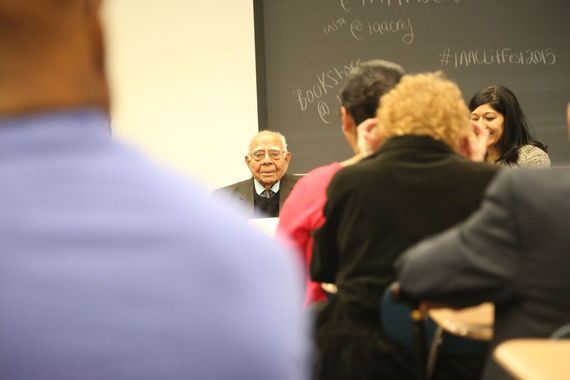 Ram Jethmalani speaking as The Rebel. Writing for Network Television
was a conversation between writers Cherian Dabis and Sharbari Ahmed -
both of whom write for the TV Serial Quantum. Photo: Shashwat Gupta.

With all the news of ISIS and Islam, I was particularly excited about the panel moderated by author Marina Budhos with fellow authors Kavitha Rajagopolan, Tanwi Nandini Islam, and Hindol Sengupta on creating literature about the South Asian Muslim experience. Their task was to answer the questions, How to bring to light an experience that is both over-exposed and invisible? Does one write to counter Islamophobia and stereotypes? Or simply stay true to one's own private vision? It was fascinating.

Another panel, entitled Treading on Eggshells: The Muslim Invasion, was moderated by author J.J. Robinson who was joined by other authors Mahmood Mamdani and Akeel Bilgrami. They discussed the global and political ramifications of Muslims today - their secular identity, nationhood and identity in a crisis moment; as well as a world view of refugees, racism, and terrorism. Just riveting.

The panel Writing for Network Television, moderated by Sharbari Ahmed with writers Shobhaa De and Cherien Dabis, was interesting as if focused on South Asians on TV. Up until recently, South Asians were often relegated to limited characterizations bordering on caricature: the affable (or grumpy) taxi driver, the fresh-off-the-boat convenience store clerk, and the "guru" brimming with Eastern wisdom. 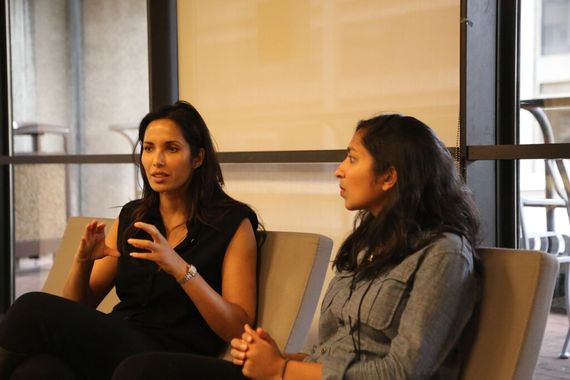 Author Padma Lakshmi with moderator Priya Krishna during the panel,
"Everything Starts With the Written Word." Photo: Shashwat Gupta.

We are starting to catch up as a nation, with shows like the Mindy Project and the rise of stars like Aziz Ansari and Asif Maandvi. And finally a major network, ABC, will air a primetime drama with an Indian female protagonist. That show, Quantico, is groundbreaking in its approach.

The weekend-long event also presented a session with Ram Jethmalani who talked directly about the current state of India under conservative prime minister Modi; panels on historical fiction, women's and LGBT stories, poetry, and -- most important for emerging and self-published writers -- a panel with publishers and literary agents who shared their secrets of how and why they choose what they do.

Chaya Babu moderated another panel close to my heart: Negotiating South Asian LGBT Identity. Authors Mala Kumar and John Burbridge joined her. They discussed how literature can be used to highlight critical gay, lesbian and transgendered issues that continue to be taboo on the Indian subcontinent.

My favorite panel was with social media maven Sree Sreenivasan who advised us all on how to publicize literature and the arts through social media. True to form, he streamed his session - which can still be seen here.

The festival was not restrained by its academic roots. This was evidenced by the Literary Pub Crawl in which local actors took visitors on a literary tour of Greenwich Village, visiting bars frequented by literati, listen to passionate recitations, and fantastic tales. As Aroon encouraged the attendees, "Imbibe! Gawk! Grin! Participate!" 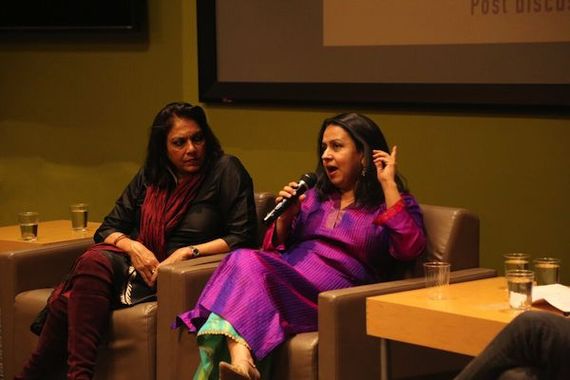 Closing Night focused on a 'Page to Stage' session featuring Director Mira Nair and Writer Sabrina Dhawan in a fascinating conversation about the process of taking Mira's film Monsoon Wedding to Broadway. Mira and Sabrina discussed the process of page to stage (and screen to stage), as well as their amazing collaboration on both the film and the play.

Filmmaker, screenwriter, producer Sabrina Dhawan made her screenwriting debut with Director Mira's Monsoon Wedding which won the Leon D'Oro at the Venice Film Festival and received a Golden Globe nomination. Sabrina, who graduated from Columbia University's graduate film program in 2001, is now writing a script for the upcoming stage production of Monsoon Wedding. 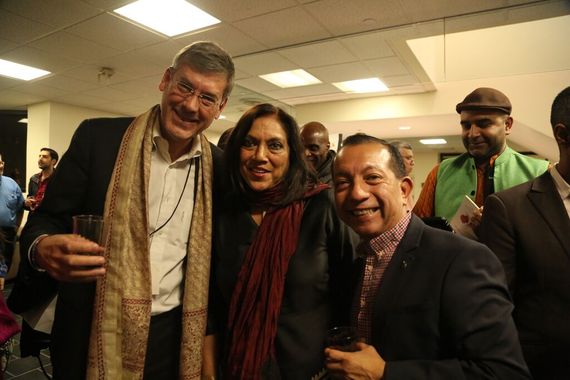 Mira is the rare prolific filmmaker who moves easily between Hollywood and Independent cinema. I first met and wrote about Mira at The Asia Society in 2009, resulting in the piece Thought Leader and Global Citizen, India's Filmmaker Mira Nair.

Mira made a stunning entry onto the world stage with her debut feature film Salaam Bombay! in 1988. Her second film, Mississippi Masala (1991) won three awards at Venice. Since then she has made many films such as Kama Sutra: A Tale of Love (1996), and the Amelia Earhart biopic, Amelia (2009) starring Hilary Swank and Richard Gere. 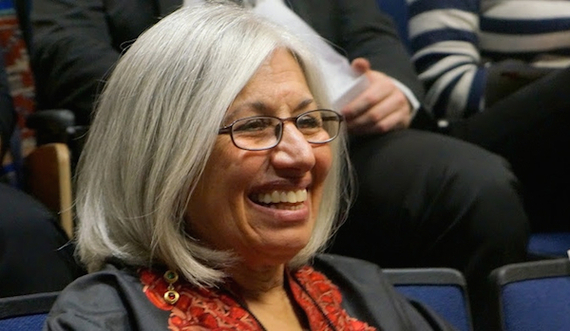 Founder Aroon Shivdasani at the center of the storm. Photo: Sangeeta Jain.

The Literary Festival was sponsored in part by India Abroad, LassiwithLavina.com, Neerja Sethi, the J. Luce Foundation, and TakkarHarriceNY-DreamsB4UAVSmoleculecommunications.

Literature is a window into the soul of humanity, and as the world becomes perhaps less humane, we need to focus on literature all the more. I was a Japanese cultural studies major focused on literature and although I went into finance and philanthropy, this background has made my life that much richer.

The J. Luce Foundation salutes thought leader and global citizen Aroon Shivdasani for her unwavering support of the Arts in New York City, strongly recommend that the Indo-American Arts Council be given a home to grow Aroon's vision, and look forward to supporting the Third Annual Indo-American Literary Arts Festival next fall!