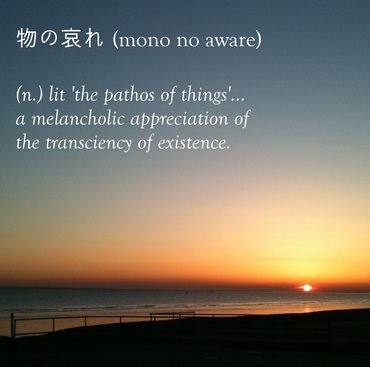 Of all the intriguing concepts in my gathering of "untranslatable words," few are stranger or more alluring to me than those hailing from Japan. Okay, having read Edward Said, I'm wary of the risk of "orientalizing" this fascinating country, of romantically constructing it as the mystic "other." But that said, as someone who is captivated by Buddhism, I'm entranced by those Japanese words which seem to crystallise its insights in a direct yet poetic way.

Indeed, there is a rich and vibrant tradition in Japan of communicating the wisdom of Buddhism -- and Zen in particular -- through the subtle yet potent vehicle of aesthetics. In fact, aesthetics are particularly effective at doing this. Zen aims to bypass the limits of conceptual thought, and to "point directly" into the "suchness" of reality. And, art is uniquely effective at just this kind of pointing. As such, Japan has developed a myriad of art forms -- from flower arrangement to swordsmanship, poetry to painting -- to articulate and facilitate spiritual insights. Among these spiritual insights are certain perceptual-emotional "moods" that Zen aims to evoke. According to the great Alan Watts, who was so influential in helping bring Zen to the West, three key moods are treasured above all: mono no aware, wabi-sabi, and yūgen. I should like to dwell here on the first of these, mono no aware (物の哀れ).

The term was coined by Motoori Norinaga, the eighteenth century literary scholar, by combining aware, which means sensitivity or sadness, and mono, which means "things." Norinaga saw this mood as being at the very centre of Japanese culture, encapsulating the pathos derived from awareness of the fleeting, impermanent nature of life. This is captured in the opening of the epic 14th Century Japanese folktale, The Tale of the Heike:

The sound of the Gion shōja bells echoes the impermanence of all things...
The proud do not endure, they are like a dream on a spring night.

Recognition of the impermanence and transience of life is a central tenet of Buddhism, and indeed of most Eastern philosophies. Buddhism holds that life is marked by three key qualities. The first two are impermanence and insubstantiality, referred to in Japanese respectively as mujō (無常) and muga (無我) However, unfortunately, most of us live in denial or ignorance of mujō and muga, clinging resolutely to phenomena that are intrinsically subject to change. This kind of clinging is then the cause of the third "mark" of existence, namely ku (苦), which translates as dissatisfaction or suffering. However, the promise of Buddhism is that liberation can be found through a deep understanding and acceptance of mujō and muga.

This is where mono no aware comes in. With this mood, acceptance of impermanence and insubstantiality is elevated into an aesthetic sensibility, a state of mind that actually appreciates this ephemerality. This does not mean impermanence is welcomed or celebrated. There is still sadness present in mono no aware, a sorrow at this transiency, of the loss of people and things that are precious to us. However, this melancholy is suffused with a quiet rejoicing in the fact that we had the chance to witness the beauty of life at all, however fleetingly. We are sighing rather than weeping. This mood was captured with particular genius by the poet Matsuo Bashō (1644-1694), arguably the greatest master of the Haiku. Many of his poems are revered as perfectly articulating mono no aware, perhaps above all this...

Summer grasses --
the only remains
of warriors' dreams.

Moreover, mono no aware recognises that this ephemerality is somehow integral to beauty, that beauty depends on this kind of transiency. In Zen the pre-eminent symbol of mono no aware is the cherry blossom, whose fragile efflorescence captivates our attention so briefly during the first bloom of spring. Crucially, our appreciation of its beauty is heightened by our awareness of its transiency, in a way that would be missing if its delicate blossoms were a permanent feature of our landscape. And as we reflect on this intertwining of beauty and transciency, it may perhaps elevate our appreciation of all that is dear to us. As expressed by Yoshida Kenkō (1283-1350):

If man were never to fade away like the dews of Adashino...
how things would lose their power to move us!

What if we could learn to see all the world through such eyes?

Tim Lomas
Lecturer and researcher in positive psychology at the University of East London.