Olivia McGilchrist is a visual artist exploring translocation and issues of Caribbean cultural identity by proxy of her alter-ego whitey's placement in the Jamaican landscape. Through her riveting and inspiring work McGilchrist questions the shifting categories in which she belongs, from the female body in a postmodern space to a visibly white postcolonial creole identity, whitey questions the role of racial, social and gender based categorization, classification and discrimination in the contemporary Caribbean space. Most recently, whitey has not always been present, although the work still focuses on masked figures and the act of masking in Caribbean centered practices. While we appreciate the complexity and intrigue of McGilchrist's mandatory artist's statement, we needed to know more, much more:

When and how did your alter ego "whitey" first come into existence?

In Jamaica, 'whitey' is short hand for white people, and / or anyone who seems to be a visitor, since most of the time they are white. At the same time, white Jamaicans are called 'whitey' sometimes, but probably less than people who are clearly not from the island-or not living there.

Really, it's just a way to name someone when you don't know their name, and many other terms are used such as 'Ras' for a Rastafarian, 'Browning' for a visibly mixed person or even 'Blacks' for someone with very dark skin.

Since I was called whitey a lot when I first moved back to Kingston, and found this surprising-with my European upbringing-I decided to deal with it head on by attempting to visualize what a female 'whitey' represents in the Jamaican landscape. Previously, I had mostly focused my lens on others, but this time I decided to turn it around, as I first had to acknowledge the new reality I was operating in before touching upon other people's realities, which I had a lot to learn about.

What has been the response not only in the Diaspora but the art world to your alter ego?

The responses have been different depending on the space where the work is presented, however the overall reaction has been positive, albeit the fact that I'm dealing with a series of very contentious issues around race, gender, privilege and the contemporary socio-cultural context within the Caribbean and beyond. I'm hoping to create a platform for more questions and conversations around these topics, and am open to discussions about new readings of the work.

Do you feel that whitey will be a persona that will expand her presence in your work or how do you see her evolution?

whitey was created in Jamaica and now that I'm based in Montreal, I have been assessing how and when she will feature in future work, but she is still around and I will keep thinking about the relevance of her presence and what she represents in the different environments I am creating in. 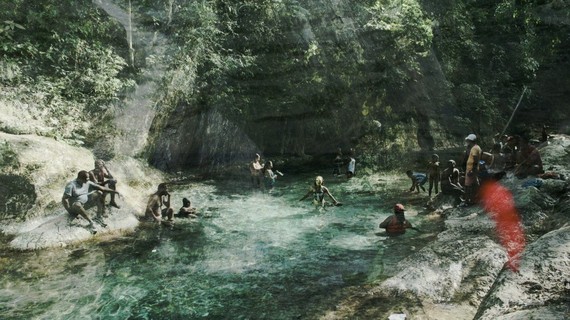 Can you share the inspiration behind your most recent work from many sides commissioned by Davidoff?

from many sides highlights intuitive connections to the Caribbean island space; to it's rich hues, strong contrasts, darkness and light. Portraying these sites of memory, blending stories and myths of a complex and hybrid past, the layered sequences allow the figures, trees and water to transform, merging with the surrounding land.

A staged sequence of a contemporary River Mother (or Mermaid) evokes profound connections across the region by referring to the presence of this shared mythical figure embedded within the region's cultural space.

The elemental, cyclical ebb and flow of Caribbean waters sifts through layers of inherited histories, painting the physicality of time through light, colors, textures and sounds from nature. This ephemeral audio-visual blend offers an immersive experience in the liquid and fantasy space of the screen.

When creating such powerful and stirring work can you give us a little insight into your creative process?

The brief from DAI (Davidoff Art Initiative) was very open, hence I was able to focus on the conversation (or lack thereof) around mythical female Caribbean characters within a new media arts practice.

This is something I have been interested in since moving back to Jamaica, as I was struck by the lack of regional female role models and references for young Jamaican women. This developed into a fascination with a set of particular mythical characters: the Riva Mumma, or Mermaid, the Ol' Higue, or Vampire and the only female National Hero: Queen Nanny of the Maroons.

In the summer of 2013, I was given the space to really push my first project on the Riva Mumma into a four-screen video installation, for the 'new roots' exhibition at the National Gallery of Jamaica, in collaboration with the Gallery's team.

In August 2015, following a troubling series of deportations of 'undocumented' Dominicans of Haitian descent, back to Haiti (see Al Jazeera link) I wanted to evoke the cultural connections between both populations-elements of their shared heritage such as stories around 'Yemaja', 'Mami Wata', 'Oshun', or 'Marta la Dominadora' (multiple names for a female character associated with water) to confront the notion that each group is profoundly different-which is often used to justify the harsh segregation and correlated racism towards Haitians.

Mostly shot in and around the town of Bahoruco, and it's surrounding area, Barahona (very close to the Haitian border) in the Dominican Republic, I was able to record local residents who appeared to be both Dominican and Haitian, or of Haitian descent, and mostly filmed the latter disappearing into the forest, since many live semi-legally and in very remote communities.

This time, I worked with one screen, focusing all my attention on layering and playing with opacity levels within a single timeline. This version of the Mermaid became the guiding thread between a series of evocative locations that are constantly blending into each other throughout the video. I wanted the viewer to feel both compelled by the lush images yet slightly uneasy or uncomfortable when being immersed in an environment that a mythical female character can call home. You are invited to her world, but within her own terms. She appears within this border zone, maybe to remind the casual by passers about their complex common histories, and also reinforce the dialogue about each of our responsibilities to preserve her natural habitat. 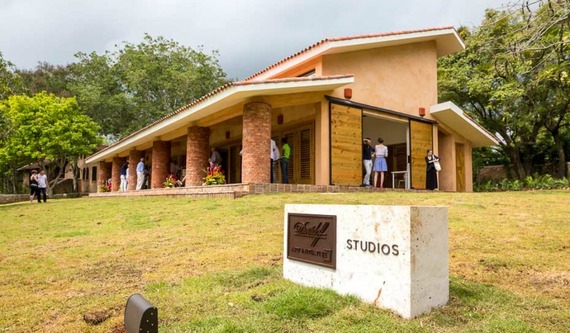 How has being a part of the Davidoff Residency Program assisted you in both your sourcing of inspiration as well as bringing new work to fruition?

Firstly by giving me a commission for a video piece about the Caribbean, which was an exciting challenge. Then by giving the work great exposure.

Most of all, the team at Davidoff really care about supporting art-making and thinking about the context for creating within a Caribbean centered world view, which is what I'm most excited about. From the residencies, the dialogues, grants and the editions there is a consistency and a desire to keep asking questions about a Caribbean art platform that stands on it's own in the global context. I look forward to seeing how various Caribbean public and private institutions can continue building links with each other through the support of partners such as the Davidoff Art Initiative.

Can you share with us any upcoming projects we can look forward to seeing?

One of the many plans is to continue working with Virtual Reality for my own projects, then creating a platform for other Caribbean artists to experiment with the medium.

The main themes I am working with now are: the digital image, both still and moving, it's impact in our screen-centered lives, and the importance of local and global communities, their stories, wisdom and the relevance of creating real and virtual meeting spaces through a visual arts centered practice.

More specifically, I am currently an Artist in residence at the StudioXX in Montreal (an amazing Feminist & Technology studio) where I'm working on integrating the time based work of two other Jamaican New Media artists Oneika Russell and Di-Andre Caprice Davis into a 3D environment which I'm testing out in 'real' reality (as an installation with video mapping in space) before going back into virtual reality. You can see the results of this work in progress by early July of this year.

Since 2014, I've been investigating the possibilities offered by Virtual Reality within my experimental media arts practice at the intersections of research/ technology / education, as a compelling portal to our 'prise de conscience' of Édouard Glissant's notion of 'creolisation', which I see as a pertinent interpretive tool against which to measure the success and limitations of immersive embodied technologies.

all photos courtesy of @oliviamcgilchrist