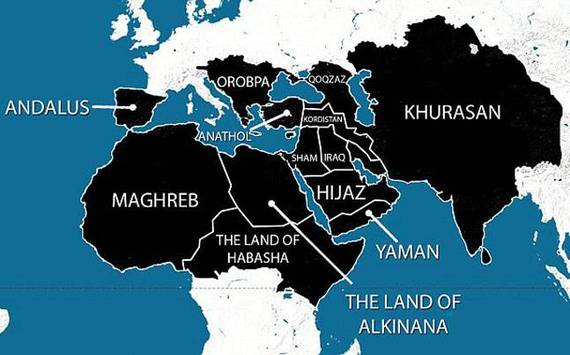 A careful study of the first caliphate (632-661 C.E.) demonstrates that the ISIS caliphate launched by Abu Bakr Al-Baghdadi in Iraq is a non-starter. A viable Islamic caliphate would most certainly abolish the kingdoms of Saudi Arabia, Bahrain, Jordan, and Morocco, the emirates of United Arab Emirates, Kuwait, and Oman, and the autocratic governments of Egypt, Syria, and Sudan. See the proposed map of the ISIS caliphate. A caliphate started by an ordinary warrior carries no weight with the Arab aristocratic families and no legitimacy with most Arab theologians, who see the Islamic caliphate as Allah's gift granted exclusively to the Quraysh tribe of Prophet Muhammad. A universal caliphate open to all Muslims of all ethnicities from Morocco to Indonesia (See the first commentary) to hold supreme office of the caliph is a heresy that very few theologians are likely to accept as a viable paradigm.

In almost all systems, the highest office is shielded from "foreigners." Consider the United States. When Republican Party presidential candidate Ben Carson stated that a Muslim should not be permitted to be the U.S. President, his statement was condemned because the U.S. constitution specifically states that "no religious test shall ever be required as a qualification to any office or public trust under the United States." In excluding foreigners, however, the U.S. Constitution requires that the President be a natural born citizen. In addition to barring foreigners, some national constitutions do impose a religious test for holding the state's highest office. "A person shall not be qualified for election as President unless he is a Muslim" requires the Pakistan constitution. "The King shall at all times profess the Evangelical-Lutheran religion, and uphold and protect the same" commands the Norway constitution. At the Prophet's death, Arab clans were determined to exclude "foreigners" from holding the office of the caliph, even if the "foreigners" were pious Muslims with competent skills to run administrative affairs. Conflicts over the caliphate dragged a newly revealed religion into the morass of inter-tribal and inter-clan Arab rivalries. As the caliphate grew stronger and wealthier with inputs of new territories, captured slaves, and tax revenues, the power politics among clans turned more and more vicious and violent (much like violence today pertaining to Syria and Yemen). The Arab clans vying for the control of caliphal resources and prestige forced the Prophet's companions, widows, and relatives to take sides, even fight wars with each other, ruining the unity of Arab Muslims that the Prophet had painstakingly forged. The Qur'an and Prophet's Sunnah were interpreted and misinterpreted to support the competing clan claims to the caliphate.

Three Paradigms Three conflicting paradigms surfaced to conceptualize the caliphate. The matter was highly contentious because the caliph was to be the successor of the Prophet of Allah (khalifa rasul Allah). The first paradigm contended that the caliphate is the exclusive right of the Prophet's tribe, the Quraysh, preferably the Prophet's clan within the tribe, known as Banu Hashim. The second paradigm drastically narrowed the field of succession by arguing that the caliphate belongs only to the Prophet's family, the most entitled member of which was Ali, the Prophet's first cousin and son-in-law. The third paradigm, the most universal and democratic in spirit, rejected the family models altogether and argued that the caliphate is open to all pious Muslims regardless of tribal affiliations to the Prophet. The Quraysh of Makkah and Medina derided the universal paradigm with utter contempt, naming its proponents as Kharijis (secessionists, mutineers, and troublemakers).

The tribal paradigm, which the Arab jurists endorsed as Islamic customary law, required certain eligibility qualifications for the office of the caliph including religious and piety tests. In the long run, the piety test was ignored as some caliphs indulged in prohibited conduct. However, the tribal eligibility qualification was made more stringent. The tribal paradigm was appealing to many Arab clans of Makkah and Medina who had converted to Islam and belonged to the Quraysh tribe. It was a big-tent model designed to attract other clans of the Quraysh tribe, such as the Abd-Shams clan, hostile to the Prophet and Islam. As the caliphate expanded in size and wealth, more and more clans of the Quraysh tribe converted to Islam, coveting for the caliphate. However, the non-Quraysh Arab tribes had little political incentives to support the caliphate or embrace Islam.

The narrow family paradigm was unacceptable to powerful and wealthy Arab clans who belonged to the Quraysh tribe but not to the Prophet's family. The Khariji model was ruled out of order because it would open the door for Jews, Syrians, Mesopotamians, Palestinians, Egyptians, and Iranians - the foreigners - who would convert to Islam and lay claim to the caliphate.

Soon after the Prophet's death, the tribal paradigm was elevated from custom to theology as it was fortified with the Prophet's sayings, some real and some fabricated, and even a chapter of the Qur'an (Sura 106) that invites the Quraysh tribe to accept Islam and blesses their commerce and trading caravans. It was conveniently ignored that the Qur'an (Sura 111) also curses the cruel members of the Quraysh tribe. For more than six hundred years, the Quraysh caliphs in power reinforced their own legitimacy. Even though the twenty-first century Muslim communities, highly diverse in populations, have developed diverse forms of government, an idealized version of caliphate inspires Arab militants to challenge the kingdoms and other "non-Islamic" governments. They invoke a Prophet's hadith (the authenticity of which is uncertain) that predicts that Muslims, after experiencing corrupt kingdoms and cruel monarchies, would eventually reestablish the caliphate.

ISIS Caliphate The tribal paradigm must be reconciled with the ISIS caliphate to render it theologically viable. It is unclear whether Abu Bakr al-Baghdadi meets the tribal eligibility qualification. Known by many different names, he is also identified as al-Qurayshi, which implies that he belongs to the Quraysh tribe. The founders of the ISIS caliphate might have considered the tribal qualification test before launching Al-Baghdadi as a caliph. However, the founders should know that mere membership in the Quraysh tribe is insufficient to acquire the caliphate. There are millions of Muslims, even non-Arabs, in all parts of the world who have adopted the name Qurayshi, some claiming membership in the tribe through twisted family trees, and some having no connections whatsoever with the Prophet's tribe.

The caliphate is a political office; and historically, the fight for its acquisition has been cut-throat. Previously, only powerful clans within the Quraysh tribe were able to succeed to the caliphate. And even within a powerful clan, only dominant families reached the office of the caliph. In fight for the caliphate high office, the power dynamics and the associated violence were no different than what we see today in the Arab Middle East. In the first caliphate, within thirty years after the Prophet's death, three of the four caliphs were brutally murdered, one by an Iranian slave, one by Egyptian rebels, and one by the Kharijis of Mesopotamia. These murders not only challenged sovereignty of the Quraysh tribe but the assassins were also unhappy with the chosen caliphs and their administrative decisions. So intense was the allure of the caliphate that the Prophet's close family members were mercilessly massacred when they challenged the powerful and wealthy Quraysh clans for succession to the caliphate, sowing the seeds of great division between Sunnis and Shias. The ISIS caliphate is a well-written screenplay containing geopolitical drama and extreme violence. Al-Baghdadi is reported to belong to a poor household with no connections to wealthy families of the Quraysh tribe. He can surely be a violent militant but he has no chance of being accepted as a caliph. Islamic groups, some affiliated with al-Qaeda, have labeled Al-Baghdadi to be a Khariji. In Western circles, Al-Baghdadi has been marked as a global terrorist. The Western media is building the man as a fiend. For all purposes, however, Al-Baghdadi is a minor character in the screenplay and an easy target the day the godfathers decide to eliminate him and flatten his infrastructure. For now, the ISIS caliphate, painted as a global pariah and accused of unprecedented cruelty and attacks in Western cities, is a blockbuster script that serves to justify arbitrary bombings, destabilize the governments in Iraq and Syria, and draw Iran into swamps of the Syrian-Kurdish battlefield.