Veronica Santiago Liu recalls being an arts organizer since age five or six. But it would be as an adult that she would take on, perhaps, her biggest project to date. On June 17, 2011 she opened Word Up Community Bookshop in an empty storefront in New York's Washington Heights. Originally envisioned as a transitory site housing a literary fair, Word Up, with support from the Northern Manhattan Arts Alliance (NoMAA), soon extended its one-month lease to August 31, 2012. Following the termination of that lease, Liu and team raised over $60,000 via Indiegogo; they moved into a permanent location on July 26, 2013. 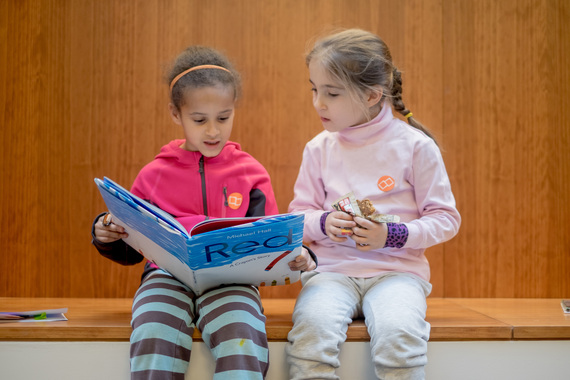 As Word Up prepares to celebrate its five-year anniversary, Liu reflects on the shop's role in the underserved community of Washington Heights. During its run, the volunteer-run space has hosted readings, concerts, art exhibitions and classes. And they've helped to redefine the role and purpose of a contemporary bookstore.

On May 14, the Word Up Collective brought their tale to the Sugar Hill Children's Museum of Art & Storytelling for a dramatic reading of their bilingual children's book Home at Word Up: A Story of a Bookshop in Washington Heights. Check out our conversation with Liu about her inspiration for Word Up, learning lessons, their relationship with the Museum and what the future holds.

On identifying the need for Word Up:

I had started an afterschool program with People's Theater Project that combined writing, reading and theater for teens and preteens. They would write their own stories and put together a performance and book. With theater you only experience it in the moment but with books you need reflective space to immerse oneself. We wanted to have the books available to the public. But after the show there was nowhere central where kids could tell their neighbors to get the books they wrote. I thought it'd be cool to have a bookstore very close to them so that people could find it afterwards that wasn't school or only school related. That's one of the main reasons why we wanted to create Word Up.

On adjusting to having a permanent space:

One thing we've had to experience from transitioning from a pop-up space to a more permanent home has been having a longer vision plan. When we were a pop-up we would jump into action on a good idea and do it so quickly. But it's also exhausting to have a rollercoaster of things to do instantly. Now in a more permanent space with a longer leeway we are figuring out how to be more sustainable. Once we got the space we had to change how we thought as a group to focus on more important decisions that are sustainable versus what is urgent.

On Word Up's relationship with the Museum:

The Museum is fueling my excitement even more than usual. I recently had a baby and it makes me feel like now is a good time to have an awesome children's museum a few blocks away. To have a baby grow up in the Museum's lab room with stuff to make and play with is an amazing resource. So now there is extra personal investment for me to have the Museum thrive. 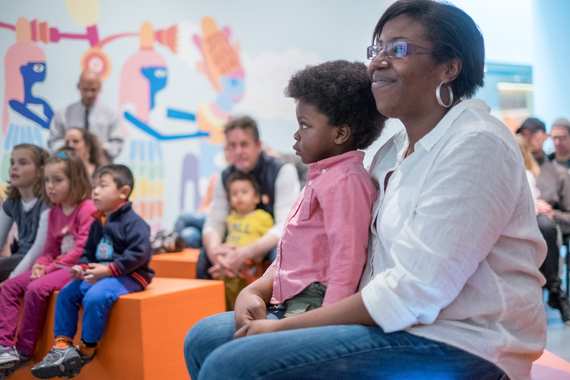 On the future of Word Up:
We would love to own a building that is really a community space with a bookstore component. Right now we have a bookstore, gallery and retail floor all on the same floor. We do a lot in the space but can use a more dedicated space for our spoken word teen group, tutoring, community meetings and artmaking. We won't get there next year. But it has been in the works and on our minds since the very beginning when we saw the response to what we had going. What happens here is so much more beyond books.

- - -
Up on Sugar Hill is a monthly blog post developed by the Sugar Hill Children's Museum of Art & Storytelling and written by Souleo. Each month features highlights from the museum's exhibitions, public programs and/or blog.

Update: Word Up will celebrate its fifth anniversary with a special day of activities on Saturday, June 18. Click here for details.