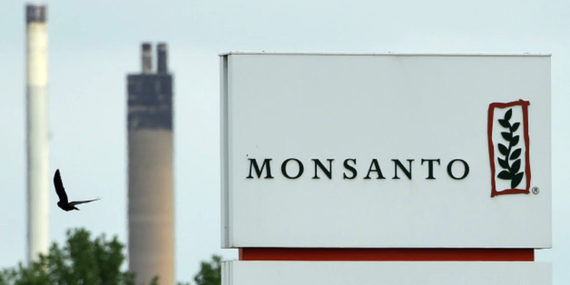 Bayer better be paying attention to this.

The German company's intended $66 billion acquisition of Monsanto Co. comes amid growing concern over the future of the company's top-selling weed killer, a chemical called glyphosate that Monsanto introduced to the world 40 years ago as the active ingredient in its Roundup herbicide. Monsanto reaps billions of dollars annually, roughly a third of its sales, from those products.

So it's no small matter that in mid-October the Environmental Protection Agency (EPA) plans to spend four days holding public meetings with a scientific advisory panel on the topic of whether or not glyphosate can cause cancer. The idea of shining a public spotlight on this mounting concern about the world's most widely used herbicide has not set well with Monsanto and the rest of the industry that profits from glyphosate products like Roundup. Agrichemical interests have gone so far as to tell the EPA that the meetings should not be held at all, and have said that if they are, many of the world's top scientists should be excluded from participating.

The industry clearly does not welcome the public scrutiny the meetings bring, but it should be satisfied that the EPA has made it clear it has no intention of contradicting Monsanto's claims of glyphosate's safety. After all, in a Sept. 12 report issued to the public, the EPA offered a 227-page evaluation of glyphosate's cancer-causing potential that ended with a "proposed" conclusion that glyphosate was '"not likely to be carcinogenic to human' at doses relevant to human health risk assessment." All of this before the meetings are held.

To its credit, the EPA did issue several caveats in that report, acknowledging that some research does link glyphosate to cancer, but offering various explanations as to why the agency doesn't believe those study results are significant, and/or are outweighed by other studies. The agency also added a host of qualifiers, stating that with respect to epidemiological studies, the data is limited and outdated. Because there has been such an "increased use of glyphosate following the introduction of glyphosate-tolerant crops in 1996, there is a need for more recent studies since a large number of studies were conducted prior to 1996," the EPA stated. The agency also said that research needs to be done on glyphosate formulations, not just glyphosate alone.

There is obviously a lot at stake - Monsanto is currently being sued by dozens of people who say the company's Roundup herbicide gave them or their family members NHL, and the company is fighting a court battle with the state of California over regulatory efforts to add glyphosate to a list of known or probable carcinogens. And there remains the matter of the EPA's long overdue environmental and health risk assessment for glyphosate, in which the EPA could add restrictions to the use of glyphosate if the agency deems those are necessary. That risk assessment was due out in 2015. Then the agency said it would be released in 2016. Now the agency says it may be completed by spring of 2017.

With the Bayer acquisition, the lawsuits and the risk assessment looming, Monsanto has been pulling out all the stops to defend glyphosate. The pressure on the EPA to defend glyphosate began immediately after the World Health Organization's International Agency for Research on Cancer (IARC) declared in March 2015 that research showed glyphosate was "probably" carcinogenic to humans. The IARC decision was announced on Friday, March 20, 2015 and by the following Monday morning, Monsanto's Dan Jenkins, the company's regulatory affairs leader, was already calling and emailing EPA officials demanding they "correct" the record on glyphosate. Emails obtained through Freedom of Information request show Jenkins submitted "talking points" to the EPA to try to contradict IARC. And since then Monsanto has only intensified its efforts to invalidate the findings of the IARC group, attacking the veteran scientists as an "unelected, undemocratic, unaccountable and foreign body."

Monsanto has also subpoenaed emails and other records from the chairman of that IARC committee, Aaron Blair, a scientist emeritus at the National Cancer Institute, who served as chairman of the IARC team. Blair has a long career of accolades and appointments that acknowledge his expertise, and he has served on numerous national and international scientific review groups, including for the EPA. But Monsanto has deemed Blair's work suspect.

And Monsanto's apparently has done some arm-twisting in Congress. On Monday, the chairman of the House Committee on Oversight and Government Reform wrote to the National Institutes of Health, reciting many of the complaints Monsanto and its allies have made about IARC and challenging grants the NIH has made to IARC.

Portier and more than 90 other international scientists have issued a detailed report laying out the specific research that ties glyphosate to cancer both in animal studies and in human observations. The scientists said the only way for regulators to discount the evidence is to bend well-established rules for scientific evaluations. They say available human evidence does show an association between glyphosate and non-Hodgkin lymphoma; while significant carcinogenic effects are seen in laboratory animals for rare kidney and other types of tumors. There is also "strong evidence of genotoxicity and oxidative stress," including findings of DNA damage in the peripheral blood of people exposed to glyphosate, the scientists said.

"The most appropriate and scientifically based evaluation of the cancers reported in humans and laboratory animals as well as supportive mechanistic data is that glyphosate is a probable human carcinogen," the report states. "On the basis of this conclusion and in the absence of evidence to the contrary, it is reasonable to conclude that glyphosate formulations should also be considered likely human carcinogens."

"The EPA is in a bad spot with this. The pushback really has come out of the industry based on things that are not scientifically sound," said Maarten Bosland, one of the authors of the report on glyphosate research. Bosland is director of the Center for Global Health Outreach Department of Pathology at The University of Illinois at Chicago, and holds a Ph.D. in experimental pathology. "The amount of money that is involved in this compound is gigantic. It's a worldwide conglomerate of financial interests that are affected by this."

It seems more than coincidental that the EPA's rationale for dismissing scientific studies that IARC said showed cancer links closely dovetails with the findings of a 16-member Monsanto-funded panel. That group of 16 scientists, all but four of whom had previously worked either as employees or consultants for Monsanto, issued a report in December that supported Monsanto's contention that there is no real evidence that glyphosate can cause cancer. Leading the work was Gary M. Williams, director of environmental pathology and toxicology at New York Medical College, and a consultant to Monsanto. Williams has a history of publishing positive findings about glyphosate; he was an author of one of Monsanto's most-touted studies, a 2000 research report that concluded glyphosate is not only not a carcinogen, but "is considered to be practically nontoxic."

That panel is preparing to release five articles supporting glyphosate safety in the journal Critical Reviews of Toxicology soon, according to Intertek Scientific & Regulatory Consultancy, which was paid by Monsanto to arrange the panel.

In the EPA report, the one bright spot for critics of glyphosate is that the EPA does call for more testing. Specifically, the agency acknowledges the need to explore the fears that glyphosate formulations may be more toxic than glyphosate alone. The EPA is developing a "research plan" with the National Institute of Environmental Health Sciences to "evaluate the role of glyphosate in product formulations and the differences in formulation toxicity," the EPA said.

The meetings in Washington run Oct. 18-21, and are expected to draw a variety of attendees - lawyers, activists, farmers, environmentalists and corporate allies are all making their travel plans.

It should be interesting.