Ecoalf was founded in 2010 by Javier Goyeneche, whose idea was to create a fashion brand that is truly sustainable.

The concept arose out of his frustration at the excessive use of the world's natural resources and the amount of waste produced by industrialized countries, especially by the fashion industry. He embarked on a mission to create an entirely new concept that would combine his design sensibility and understanding of the fashion consumer with the latest in recycled materials. In 2012 he launched Ecoalf, named after his son Alfredo. The goal was to create the first generation of recycled products with the same quality, design and technical properties as the best non-recycled products. That way, Javier could demonstrate that there is no need to use natural resources in a careless way. 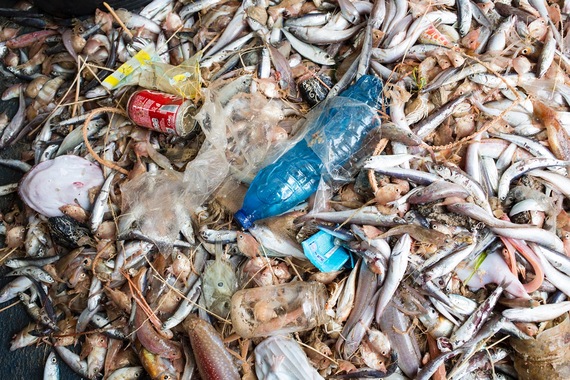 The small amount of recycled fabrics that Javier found on the market at that time were not fashionable, were of poor quality, and had only a small recycled %, so first he partnered up with manufacturers to develop suitable fabrics. It is for this reason that Ecoalf still designs and develops its own fabrics every season: it currently has 14 joint ventures around the world (Korea, Japan, Portugal, Taiwan, Spain...) where it recycles all different types of waste (such as discarded fishing nets, PET bottles, used tyres, coffee, post-industrial cotton and wool) to create yarn to produce all kind of fabrics, linings, straps, outsoles, etc.

Working with fishermen to clean-up the oceans
In 2016, Ecoalf embarked upon its most ambitious project to date: UPCYCLING THE OCEANS, an unprecedented worldwide adventure that is helping remove waste from the oceans thanks to the support of fishermen. The main objective of this revolutionary project, which Ecoalf aims to replicate in other parts of the world, is to recover the trash that is destroying the Mediterranean Sea and transform it into top-quality yarn to produce fabrics to tailor clothes and accessories.

Through the Ecoalf Foundation, funded by HAPfoundation, Ecoalf has begun to remove waste from the seabed with the participation of the fishermen of the Spanish Levante Coast. To be rolled-out in different phases, this great project intends to prove that not only is ocean clean-up possible but that part of the recovered waste can, indeed, be converted into pellets, yarn, fabrics and products - where others see trash, Ecoalf sees raw, premium-quality materials. 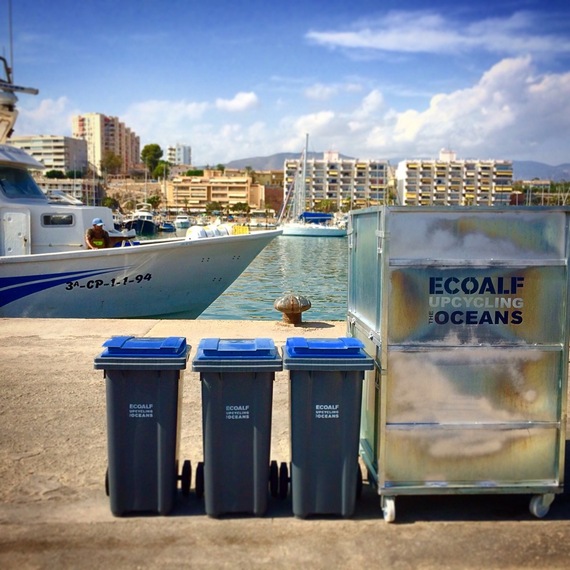 However, this project faces a great challenge because of the low and inconsistent quality of the debris recovered by the fishermen as a consequence of its exposure to sun light, salt and water. Now, more than ever, investment in R&D is crucial to the attainment of a quality of product in line with Ecoalf's standards. Once again, its goal is to succeed in obtaining 100% recycled products of high technical quality and textures and in tune with current trends but without using more of the planet's natural resources.

Currently 160 trawler boats from the 10 main ports of Levante are collaborating with Upcycling the Oceans. Every day each boat recovers approximately 4 kg of waste from the Mediterranean seabed. Ecoalf has enabled the necessary infrastructure (non-existent until now) for trash collection by installing specific containers on ships and harbours. All the marine waste collected (PET bottles, glass, cans, etc) is deposited each day in the special containers placed in each port, which are collected every week and transported to a treatment plant where the debris is cleaned with water and separated. The material is then sent to the various specific recycling channels, leaving just the PET plastic bottles, which are separated, stocked and transformed into flakes and pellets through sophisticated technological processes.

As mentioned above, due to the inequality and low quality of the waste that has been recovered from the oceans, Ecoalf's great innovation challenge is to obtain pellets with the required purity conditions so it can use them to achieve a thread yarn that meets its high quality standards.
After the success of its Spanish trial, the Ecoalf Foundation is working hard to expand and replicate the project all around the Mediterranean coast. It will also start a trial test in the US thanks to the support of the Henry Pincus Foundation. Furthermore, the Thailand government has just signed a contract with Ecoalf Foundation to start replicating Upcycling the Oceans in the south (Phuket), starting October 2016.