It's been a busy legislative season, and you would have to have been under a rock, to not know about the conservative attack on transgender people, and where we go to the bathroom. These proposed "bathroom bills" were lauded as measures to protect society by requiring transgender and gender non-conforming people to use sex segregated facilities that align with the gender they were assigned at birth. Ironically, the only people in danger, and in need of protection are members of the transgender community. These bills are simply vehicles, used by conservatives for inciting transphobia and hysteria among their constituents. The suggestion is that sexual predators will exploit non-discrimination measures to gain access to women's facilities, and this claim is simply not based in truth. There is no evidence of a transgender person having ever harassed or assaulted anyone in a public bathroom or changing room. What is true however, is that, according to the most recent National Transgender Discrimination Survey, 63% of transgender individuals report having experienced a serious act of discrimination in their lifetime. 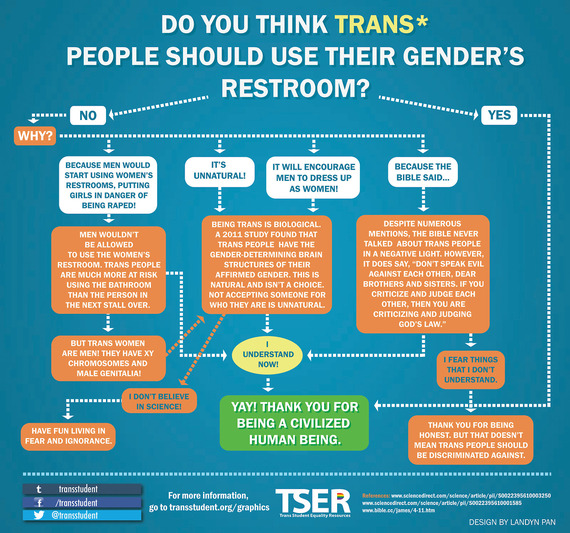 So where are we with these bills? The good news is that the bills in Kentucky, Nevada and Florida are dead. Florida's HB 583 was stopped, thanks in large part to a momentous effort by Equality Florida and supporters around the country. The states with bills still on the table are Minnesota (SF 1543), Texas (HB 1748), and Missouri (HB 1338). However, these bills have not gained the momentum that their authors had hoped they might, and it looks promising that they will all die out with the end of this legislative session. I feel very optimistic that none of the remaining bills will become law. That does not mean that there isn't still work to be done. I recently spoke with Mara Kiesling, Executive Director of the National Center for Transgender Equality, and she had this to say; "While I am pretty confident that we may get through this legislative year without any of these passing, we are also confident that whichever right wing hate group is egging on these state legislators will find additional legislators and additional states to introduce these bills for the next few years. We will be fighting these bills in at least 2016 and 2017. It's less likely that more bills will be introduced this year just because of how state legislative calendars work in most states, but they'll be back in future years."

Thank you to all of the advocacy groups, and to our community and it's allies for diligence in fighting these harmful bills. Let's keep spreading awareness and fighting to secure anti discrimination measures for the transgender and gender non-conforming community. I know we will continue to prevail.