Getty Images, the large American stock photo agency based in Seattle which supplies images for the media, creative professionals, and businesses, decided it was "time to give masculinity a makeover" according to Kristina Monllos's article which appeared in ADWEEK on June 11th. Getty Images has curated a new collection of images that redefine traditional representations of masculinity.

In her piece, Ms. Monllos observes that just eight years ago, images of fatherhood were scarce, and the ones that were available were steeped in clichés -- playing sports, fishing, drinking beer. But over the last three years, Getty Images has seen images tagged "modern dad" or "stay-at-home dad" increase in sales by over 450 percent. Quoting Pamela Grossman, the company's director of visual trends:

The energy and texture of the image is so markedly different in the seven-, eight-year span that we're tracking.

Every June for the past six years, my colleagues and I at the Boston College Center for Work & Family, have published a new report in The New Dad series on the changing role of fathers in America. It may be a rare point in time when the ivory tower academics and the Mad Men of the advertising industry are tracking with one another, but long before hearing about the new Getty collection and its aim to paint a new image of fathers, we had decided to call this year's report The New Dad: A Portrait of Today's Father. We, too, had decided that it was time to hit re-set in terms of how people think about today's dads. 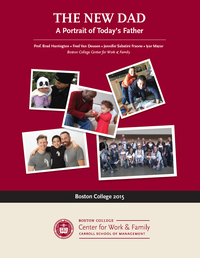 Each year, the Center has looked at fathers (in our research with mainly college educated, white-collar men) from a different perspective -- dads of young infants, professional dads in large corporations, at-home dads, etc., and with each year our depiction becomes fuller and richer. In a departure from conducting primary research, this year we have synthesized our previous five years of research with that of some of North America's leading fatherhood scholars to paint a portrait of today's fathers. What are some of the highlights of the portrait that we share in this year's report?

Major social movements typically need a very long horizon before lasting change can be observed. While the shift toward seeing fathers in a new, more nuanced and holistic light may still be work-in-progress, significant gains have occurred in only a few short years. These gains will benefit society, families, spouses, children and most of all, the fathers themselves.

Dr. Brad Harrington is Executive Director of the Boston College Center for Work & Family and a research professor in the Carroll School of Management.

More:
getty imagesfather's dayParentswork lifefatherhood
Newsletter Sign Up
Raise the kind of person you'd like to know
Subscribe to our parenting newsletter.
Successfully Subscribed!
Realness delivered to your inbox