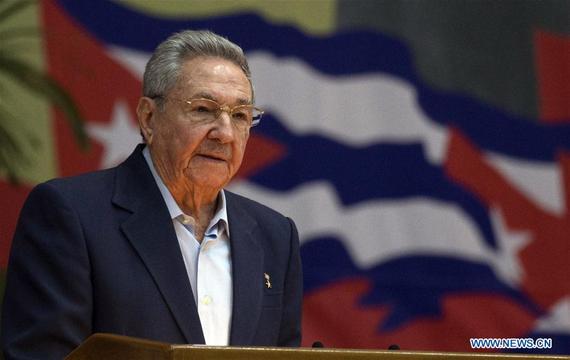 Alluding to his own mortality, Fidel Castro told the delegates to the Seventh Congress of the Communist Party he founded that this would probably be his last speech to such a gathering. When the members of the new Central Committee were announced the following day, Fidel was not among them. Generational succession is high on the agenda of Cuba's leadership, still dominated at the highest level by "los historicos" -- the generation that fought together against the Batista dictatorship and founded the revolutionary regime. At the previous Party Congress in 2011, Raúl Castro emphasized the need to build a contingent of experienced young men and women for the inevitable succession. To ease out the old guard, he introduced term limits for top government and party positions -- no more than two five-year terms -- and pledged to abide by the limit himself by stepping down as president in 2018.

At the Congress this month, Raúl reiterated the importance of rejuvenating the party. An aged leadership was "never positive," he said, reminding listeners that three leaders of the Soviet Communist Party died within months of one another a few years before it collapsed. Henceforth, Castro proposed, 60 would be the maximum age for admission to the Central Committee, and 70 would be the maximum age for assuming any leadership position.

Nevertheless, renovating the leadership will involve a "five-year period of transition to avoid doing things in haste," Castro explained, echoing his watchword for updating the economy: "without haste, but without pause." The blend of old and young was visible in the new Political Bureau. Only two of the fourteen members in the old body were dropped -- General Abelardo Colomé Ibarra, who retired as minister of the Interior in October 2015 because of ill-health, and Adel Yzquierdo Rodríguez, who was removed as Minister of Economy and Planning in 2014.

José Ramón Machado Ventura, the architect of the party apparatus over preceding decades, retained his post as second secretary despite the fact that he is widely seen as a conservative, skeptical of economic reform. In 2013, Machado stepped down as first vice-president of the Council of State, replaced by heir apparent Miguel Díaz-Canel. Machado's retention as party second secretary suggests that Raúl Castro is intent on maintaining unity at the top -- despite differences in opinion -- as the party navigates the politically treacherous waters of economic change.

Five new young members were added and their professions signal the issues the leadership sees as critical going forward. Three are technocrats: one is minister of Health, one works in biotechnology, and one works in information technology -- all high value-added fields that Cuba hopes will form the foundation for its 21st Century economy. The other two new members are the leaders of the trade union federation and the women's federation, organizations that, between them, comprise almost all Cuban adults. The inclusion of these two leaders speaks to the party's need to keep ears to the ground for early warning signs of grassroots discontent unleashed by the economic reforms.

The biggest increase in representation in the new committee is for government officials working in economic and scientific fields (Table 1). They represent 23.2% of the new Central Committee, up from just 19.8% in the 2011 committee. Presumably, these people are more technocratically minded, and more likely to support economic reform. Representation of the party apparatus increased only slightly, to 32.4% of the committee, up from 31.0% in 2011. 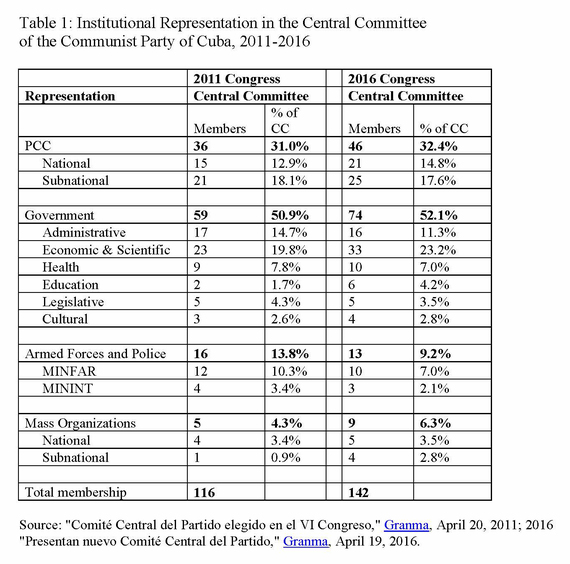 Contrary to pundits who insist that the Cuban regime is really run by the military, the armed forces and police were the big losers in the renovation of the Central Committee. Even though the committee expanded from 116 to 142 members, the number of military and security officials fell in absolute terms. They comprise just 9.2% of the membership, down from 13.8% in 2011. Moreover, the long term trend in the number of active duty military and security officials in the Central Committee has been downward ever since 1965 (Figure). 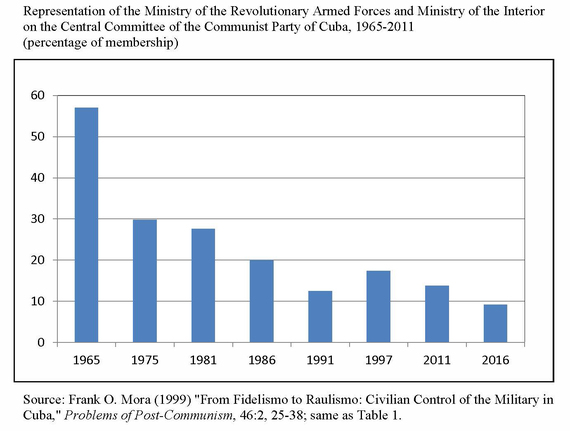 Fidel Castro wasn't the only prominent Castro not included in the new Central Committee. Neither Raúl's son, Col. Alejandro Castro, who negotiated the December 17 agreement to normalize relations with the United States, nor Raúl's daughter, LGBT activist Mariela Castro, were included. Their absence was, no doubt, a disappointment to opponents of the U.S. opening to Cuba who have been predicting that Alejandro would succeed his father, thereby consolidating a Castro family dynasty -- North Korea in the Caribbean.

The new Central Committee of the Cuban Communist Party reflects the priorities and style of its First Secretary. The party itself maintains the leading role, but the committee has a more technocratic tilt, positioning it for the complex economic tasks ahead. It combines a large new cohort of younger members, while retaining a core of experienced elders to smooth the generational transition. The increased representation of women and Afro-Cubans reflects their important role in society and politics, connecting the party to these key constituencies. In short, the new leadership exemplifies a party updating itself for the future without renouncing its past.