Contemporary pop culture is full of both lies and truths that are hard to accept. The way you've come to think about "greats" like John Wayne and even the animated star of Pokémon is probably all wrong. And sorry, but Twinkies simply aren't the everlasting dessert you hoped them to be. This is all probably a lot to handle, but we're confident you can make your way through the following 19 truths...

As there was already a registered Michael Fox in the Screen Actors Guild, the future "Back To The Future" star had to register another name. He considered going by his actual middle name, but instead decided to put down "Michael J. Fox" as a tribute to actor Michael J. Pollard.

The Hostess treat doesn't last forever and has a shelf-life of about 45 days. This is actually an improvement on the recipe that existed before the recent Twinkiepocalypse, which gave us treats that last longer than the previous shelf life of about 26 days.

And if you'd rather eat something that you wouldn't believe could last forever anyway, here's a recipe for homemade Twinkies. 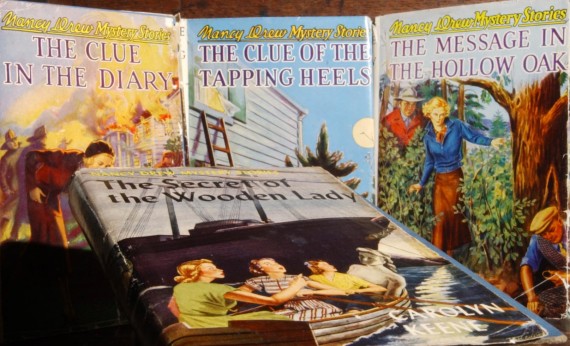 Carolyn Keene is not a real person and is actually a pseudonym for many different authors.

The writer and publisher, Edward Stratemeyer, hired ghost writers to take all of his detective-fiction ideas for the Nancy Drew series and turn them into full books. The first ghost writer was named Mildred Wirt Benson and she is the real author of "The Secret of the Old Clock," along with the next two books. She was only 24 at the time. As all writers had to sign confidentiality agreements about the fact that Carolyn Keene wasn't a real person, Benson's name has been largely lost in popular history.

This version would have been called "Superman Lives," and Cage has been quoted as saying, "Did I have a concept of how to play the character? Yes, and I can tell you it would have been gutsy. So maybe Warner Brothers got scared because they had two artists that weren’t afraid to take chances."

Would this movie have been good or terrible? That may be an unsolvable question.

French apprentice printers in the late 1730s came to hate how much better the French aristocracy treated their cats over the workers, leading primped felines to become symbols of classist oppression. In a display of opposition that may have killed the Internet in contemporary times, French workers began kidnapping cats to slice them open and hang them by nooses in the streets.

According to the book "The Great Cat Massacre: And Other Episodes in French Cultural History," the whole thing was considered deeply hilarious and an early moment of triumph for the French working class.

Camille Cosby, Bill Cosby's wife since 1964, revealed to Oprah that her family was audited four times in one year, had their phones wiretapped and were subjected to FBI visits at their house and on set. All of this was because Bill Cosby was put on Nixon's famed "Enemies List," along with celebrities such as Paul Newman and Barbra Streisand.

Kenny Baker (R2-D2) does not remember his days with actor Anthony Daniels (C-3PO) fondly at all and has even said that Daniels is "the rudest man I've ever met."

In a longer quote, Baker explained, "He's been such an awkward person over the years. If he just calmed down and socialized with everyone, we could make a fortune touring around making personal appearances. I've asked him four times now but, the last time, he looked down his nose at me like I was a piece of s***. He said: 'I don't do many of these conventions - go away little man.' He really degraded me and made me feel small - for want of a better expression."

After being sued multiple times over their popular "$5 Footlongs" not always being an actual a foot long, despite advertising that was pretty explicit about the size, the company had the nerve to make the following statement ...

"With regards to the size of the bread and calling it a footlong, "SUBWAY FOOTLONG" is a registered trademark as a descriptive name for the sub sold in Subway Restaurants and not intended to be a measurement of length."

Early in 2013, the company claimed they'd ensure all future "Footlongs" would truly be a foot long.

When McKellen had to film a scene featuring his character, Gandalf, standing among a large group of dwarves, the studio wouldn't let him film with the other actors and instead surrounded him with pictures of the dwarves. McKellen said that he began to break down and cry, accidentally saying into his live microphone, "This is not why I became an actor."

Nowadays the actor seems to be having quite a bit more fun performing alongside his friend Sir Patrick Stewart in two Broadway plays.

At the age of 93, Christian Spurling confessed from his deathbed that "The Surgeon's Photo" of the Loch Ness Monster was a complete hoax masterminded by his stepfather, Marmaduke Wetherell.

You see, Wetherell was employed by The Daily Mail and had an assignment to report on the Loch Ness sightings. When the paper published that his only findings ("monster" tracks) were a hoax and that he'd been fooled, Wetherell decided to get back at the paper. He enlisted his stepson, Spurling, who was a professional model maker, to create a fake monster head and then took a picture of the head floating in Loch Ness. The two hired "the surgeon," gynecologist Robert Wilson, to turn the photo into the newspaper to add legitimacy to the hoax.

Just last year, The Daily Mail published another photograph of the Loch Ness Monster, but then again, so did HuffPost.

PLAYBOY: That's hardly the point, but let's change the subject. For years American Indians have played an important—if subordinate—role in your Westerns. Do you feel any empathy with them?

WAYNE: I don't feel we did wrong in taking this great country away from them, if that's what you're asking. Our so-called stealing of this country from them was just a matter of survival. There were great numbers of people who needed new land, and the Indians were selfishly trying to keep it for themselves.

Also, Wayne's scenes apparently had to be filmed in the morning, because in the afternoon he was a "mean drunk."

Throughout the late 1970s, Eric Lawson played the iconic "Marlboro Man", serving as the centerpiece of various ads depicting him as a rugged, smoking cowboy. On Jan. 10th, Lawson died of lung cancer, the same cause of death that multiple Marlboro men before him have succumbed to.

Smoking is estimated to be responsible for around 443,000 deaths per year in the U.S. alone.

Ketchum has only caught 43 of 649 Pokémon and has never made it past the tournament semi-finals in his 14-year quest to become a Pokémon Master. This means Ketchum actually hasn't even come close at all to fulfilling the cartoon series' tagline, "Gotta catch 'em all."

If you want to begin your own quest to become a Pokémon master and succeed where Ketchum utterly failed, here's a good place to start.

"Saving Mr. Banks" essentially rewrote history and poured salt on old wounds in their portrayal of "Mary Poppins" author P.L Travers as an uptight woman who just needed to learn the value of "Disney Magic." Margaret Lyons of New York Magazine has an amazing takedown.

One of the best examples of the film's propaganda-fueled rewriting of history comes at the end of "Saving Mr. Banks," when Travers is depicted as crying tears of relief and joy because, despite her earlier reservations, the movie version of "Mary Poppins" turned out wonderful. Although it is true that Travers cried, according to the biography "Mary Poppins, She Wrote: The Life of P.L. Travers," by Valerie Lawson, those were tears of sadness and anger.

And Travers actually didn't even get an invite to the premiere. She had to force her way in to watch.

The writing of Jane Austen was despised by authors like Virginia Woolf, Ralph Waldo Emerson and Charlotte Brontë, but the most biting criticism seems to have come from Mark Twain in the quote below.

I often want to criticize Jane Austen, but her books madden me so that I can’t conceal my frenzy from the reader; and therefore I have to stop every time I begin. Every time I read Pride and Prejudice I want to dig her up and beat her over the skull with her own shin bone!

If you didn't already know, Vanilla Ice and Madonna used to date.

Basically, this should just make you feel super old. Sorry. When the show premiered in 1989, Marge Simpson was supposed to be 34, while Bart was 10. In the show's 25 seasons, Bart would now presumably be older that Marge was when "The Simpsons" first aired.

Of course, the Simpsons family doesn't age, but the show has given a glimpse at times of what older versions of the characters would look like.

Long before the days of his ownership of the Dallas Mavericks and starring role in "Shark Tank," Cuban bought a lifetime flight pass from American Airlines. The pass even required the airline to kick passengers off the plane in case Cuban ever showed up and wanted to get on.

In an interview with Billy Bush, Cuban explained that he'd once tried to use the pass go to Las Vegas with a date. When he arrived and found the flight was already full, Cuban said American Airlines decided to kick Magic Johnson off the plane.

The two would later come head-to-head in a bidding war for the Los Angeles Dodgers in 2012, a battle that Johnson ended up winning.

Two lullaby versions of Nickelback "classics" exist, and you can buy both of them on Amazon.

One five-star review reads, "This is my son's favorite band...we really dig this album and Mom's being a good sport because everyone chills out." A three-star review was upset that the lullaby artist was simply making a cash grab and wasn't being, "done by a true fan of the band being covered."

Nickelback was named the rock band of the decade by Billboard in 2009. That should also make you very, very angry.

8 Shortcuts To A Stress-Less Life