During our interview with Ina Garten about her new book, How Easy Is That?, I mentioned how Alex and I rarely had leftovers when he roasted me a chicken (we were talking about how to cook for two most simply, and Ina had suggested roasting a whole chicken early in the week and then repurposing the leftovers). All talk of practicality and leftovers ceased immediately. Ina laughed and said, "I'd say you have a good boyfriend if he makes you roasted chicken."

I think I do too. But like any curious chef, I wasn't content to let Alex keep the secrets of his chicken to himself. He taught me how to make it last spring, and since then it's become my way of roasting chicken, too. I've done it with both whole chickens and chicken leg and thigh pieces, which are super economical.

Part of Alex's heritage is Greek, and his chicken is flavored with Mediterranean accents: garlic, olive oil, lemon, oregano, and thyme. It's different from the roasted chicken I grew up with, which my mom always rubbed with a mixture of paprika, salt, and minced garlic. I have to learn how to make that chicken too--I haven't yet. So I'll tell you more about Alex's.

First, a disclaimer. What's so great about this chicken is not its crispy skin. Because Alex cooks it at a slightly lower temperature for a bit longer, the meat--even the white meat--stays incredibly tender and juicy, but what's sacrificed is that perfect, brittle, fatty skin. It's not soft or mushy or anything, just not like what you'd get on a rotisserie chicken (on a rotisserie chicken, you can have it all--it's just with home cooking that you have to choose). I know people rave about the Zuni Cafe chicken, and I'll get to that sometime I'm sure. Right now, let's go back to Alex's Greek Style Roasted Chicken with Potatoes. 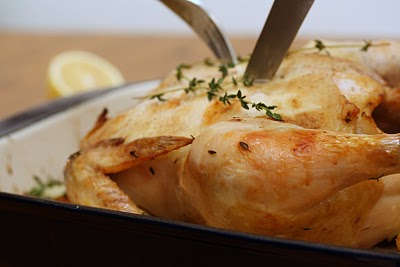 There are a few elements that make this chicken fantastic, borderline addictive. First, the meat. As I said, it's juicy. Extraordinarily so. Alex also wedges thin slices of garlic into the into the meat before the bird goes into the oven, and these flavor the chicken as it cooks. He has also pioneered the upside-down method of chicken roasting. Most cooks, I think, bake the chicken breast side up, which inevitably dries out the meat in the time it takes to cook through. By flipping the chicken, and cooking it breast-side down, the meat gets both wet and dry heat, and it stays moist. Second, the lemon. The lemon browns the skin and adds a delightful tang, which cuts through the slightly murky flavor of cooked chicken--you know, that sort of fatty aftertaste you sometimes get. And third, the potatoes.

The potatoes that get cooked beneath the chicken are so good. I joke that I can imagine Chicken-Roasted Potatoes on a restaurant menu without the chicken--the chicken would just be a byproduct. There's an alchemy somewhere in the mixture of lemon, olive oil, and the chicken's juices that makes the potatoes tender and silken in the inside, crispy on the outside. After we finish eating dinner, we go at the baking dish with forks, scraping up every last morsel of the potatoes.

That's really all there is to it in the end. Simple ingredients--a chicken, potatoes, lemon, herbs, and olive oil. A not-too-hot oven. And potatoes. But the taste is transcendant, and the smell makes the apartment feel like the warmest, homiest place on earth, especially on wintry December days and nights. 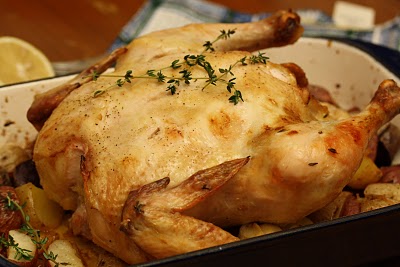 I have to admit, I don't know that much about carving chickens. We kind of hack at it. But if you know better, carve neatly. And, if you want to share your carving wisdom with me, I'd be so appreciative--leave us a comment!

Cut the potatoes into 2-inch pieces and place them in a 9 by 13-inch baking pan (or thereabouts--something that is big enough for the chicken to rest on. Toss them with 2 teaspoons of the olive oil, 1/2 teaspoon salt, 1/2 teaspoon thyme, and the oregano. Push the potatoes towards the edges, making a space in the center fort the chicken.

Rinse the chicken and remove the livers. Pat the chicken dry and put it, breast side up, on the baking dish that's holding the potatoes. Using a paring knife, pierce it about three times in each half of the breast. Wedge a slice of garlic into each piercing. Sprinkle with 1/2 teaspoon salt, half the remaining thyme, and some freshly ground pepper. Flip the chicken. Repeat on the other side, piercing the thigh and leg meat, and wedging in slices of garlic. Sprinkle with the remaining salt. Drizzle about 1 tablespoon of olive oil on top of the chicken, plus the juice of half the lemon. Cut a piece of foil so that it fits around the chicken, and place it on top like a hat.

Bake the chicken for about 45-55 minutes, basting occasionally with its juices, until the chicken is cooked through--you'll know it's cooked when the juices run clear. It may take longer than this, depending on the size of your chicken, but you'll just have to check. You'll also have to check on the potatoes--if they're not close to done, cook a bit longer before proceeding to the next step.

Take the chicken out of the oven. Toss the potatoes and remove the foil hat. Turn the chicken over so it's breast-side up and squeeze the second half of the lemon over it. Drizzle on a little more olive oil. Raise the heat to 425°F and cook for about 10-15 more minutes, until the skin browns a bit and the potatoes are done.

Remove and let rest about 5 minutes before carving up the chicken and plating each portion with a generous serving of potatoes.

In the Small Kitchen: 100 Recipes from Our Year of Cooking in the Real World
by Cara Eisenpress, Phoebe Lapine