Think white privilege doesn't exist in America? Consider just how much the color of a child's skin changes his or her odds of escaping poverty later in life.

Roughly 16 percent of white children born into the poorest one-fifth of U.S. families will rise to become a member of the top one-fifth by the time they turn 40 years old, according to a new study by Brookings Institution researchers for the Boston Federal Reserve.

Those are fairly bleak odds, but for poor black children the odds of making it to the top are even longer: Only 3 percent of black children born into the poorest one-fifth of families will ever make the leap to the top income group, according to the study.

This chart shows the social mobility levels for white Americans. The horizontal axis shows where families start out on the income ladder, and the vertical axis shows the percentage of children from those families that end up at each income level by the age of 40. 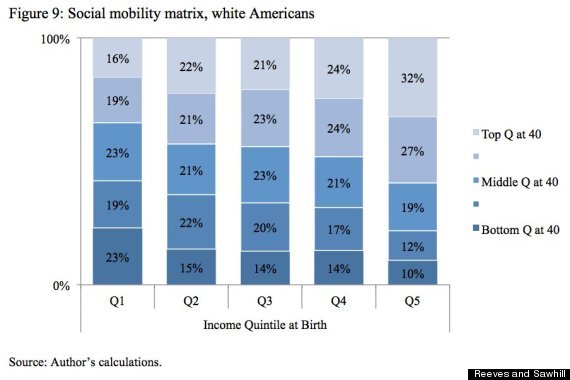 As you can see, the poorest white Americans have a decent shot of ending up in a higher tier than their parents -- 58 percent of white children from the poorest families end up in one of the top three income brackets.

But for black Americans, escaping poverty is far more difficult: 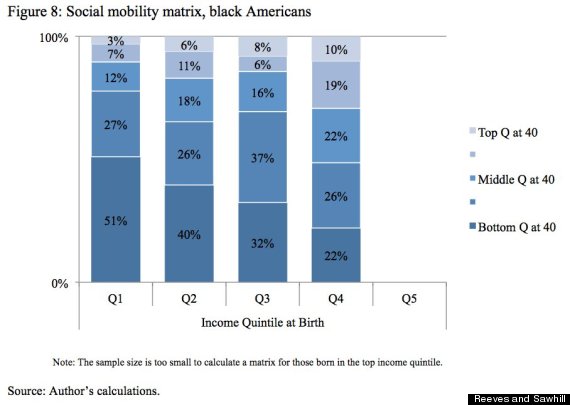 Just 22 percent of the poorest black children manage to get into the top three income brackets by the time they are 40. And note that there aren't even enough black families in the top income bracket to do statistically significant analysis.

The findings in the paper, co-authored by Brookings economists Richard V. Reeves and Isabel V. Sawhill, run counter to the beliefs of some, like Fox News host Bill O'Reilly, who argue that racism in this country has diminished to the point that white privilege no longer exists. O'Reilly visited The Daily Show last week and argued that any person, regardless of race, can get rich in America so long as they work hard.

But opportunities for success are clearly not that simple, for a host of reasons: The myriad legacies of slavery and Jim Crow, decades of racist housing policies, educational disparities, employment discrimination, and a race-fueled War on Drugs.

Where you start in life financially matters a lot, too: If you're born in the poorest 20 percent of families of any race, yet still earn a college degree, you have roughly the same chance of being stuck in the poorest bracket as rich high-school dropouts do of staying in the richest bracket (16 and 14 percent, respectively).

Upward mobility is a much harder climb than it would seem.