I have a dream, not a social paradigm shifting dream, just a modest little hope really... I want to be an urban chicken farmer.

I am not talking a large-scale operation. I would be happy achieving egg sustainability for our family of three. I think two chooks (hens) out there pecking in our sandy dirt, ought to do it.

I have successful city farmer friends, busting to pass on their accrued hen know-how. My most ambitious friend has eight chickens clucking it up in Mar Vista. While another pal meant to have just a couple of chooks, but now has three. It seems you always end up with one more chicken than you planned on...

Maybe that's why my husband put his foot down. He finds the responsibility of even one pet -- just a solitary bunny at this stage -- more than enough inter-species interaction. Also we both know, he'd be the one building the coop, and yes, sometimes washing chicken pooh off a lovely fresh egg. 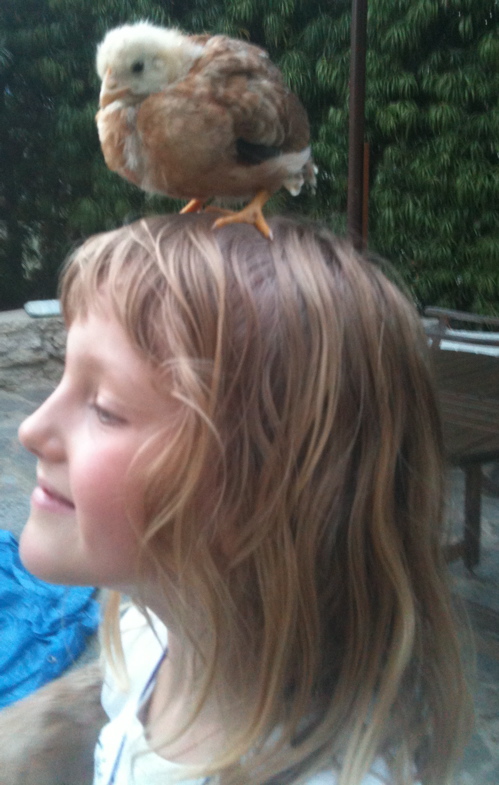 My daughter with our friend's chicken, Fluffy, on her head

But secretly, between you and me, this dream will not die. And it's a little bigger than envisioning myself walking out the front door to gather fresh eggs lying in the early morning dew.

Eggs are a great source of protein, they are delicious, and nobody dies. What I didn't realize when I started down the lowering-my-carbon-footprint path, is that eggs are right up there ahead of dairy, and not far behind meat. That is, it takes a lot of energy and resources to produce eggs - IF you are doing it on a large scale.

Large-scale agribusiness is one of the biggest causes of atmospheric degradation, using an incredible amount of fossil fuels. Carbon dioxide (the biggest atmospheric greenhouse gas polluter) clocked in at 400 parts per million last week. The dreaded milestone was recorded at the U.S Mauna Loa observatory in Hawaii. Climate scientists keep warning we should be going in the other direction, to get back to the safety zone of 350 ppm.

So while my chicken dream may seem quaint, it is actually a tiny part of a movement of smaller scale farmers and concerned citizens who want to take back our food supply any way we can. The idea is to eat food with fewer unidentifiable ingredients, and ease up on pollution while doing so -- because skipping off to Whole Foods and buying organic is no longer the answer.

Organic agriculture has been hijacked by industrial-sized agribusiness. Which brings me back to my friends, the hens.

Corporate style factory farming is muscling in on America's organic poultry industry, and how it's regulated. Big business organic is no spa situation for the hens, born free-range as you wanna be.

In fact free-range chickens may be one of the biggest marketing lies of all time. Organic standards stipulate all organic livestock must be able to get outside. However USDA regulations state access to the outside world is enough to earn a free-range sticker.

So a chicken farmer can have 35,000 (or more!) birds in a shed and one 2x2 door for them to get outside. Double whammy -- the 2x2 door is not opened until the chickens are five weeks old, by this time they are usually too scared to venture out.

And if those chicks ever do overcome the overcrowding and fear to make their way outside, put away your thoughts of them pecking in the dirt and pasture, enjoying dust baths and gobbling down insects -- all the things that make pastured poultry produce eggs that are truly nutritious and delicious. The USDA does not specify the quality of the outdoor area, or how long chickens can frolic there. Outside can be just a patch of gravel, or a screened in porch, and the 2x2 escape-hatch might only be open for five minutes a day.

So much for free-range chickens and eggs.

Cage free is another misnomer. It's just wall-to-wall, floor-to-ceiling birds living on shelves rather than cooped up in cages. There can be 40,000 to 50,000 birds per building. Birds in such confinement have to be de-beaked to avoid cannibalism -- yes that's how stressful cage free existence is. No wonder Michael Pollan describes the organic free-range egg business as a huge confinement operation.

A family from my daughter's school, have had a flock of chooks in the middle of Santa Monica city for 27 years. One of their old ladies, is obviously going through the chicken change. Post-fertile, raging under the effects of a chicken's version of increased testosterone levels, she now loudly cock-a-doodle-dos every morning.

When I heard that, I thought this what I need. A chicken of my own, to one day go through menopause with. Yes sister! Sing that righteous song of indignation at hot flashes, our shared outrage at the millions of caged chickens around the world, and worry over excessive carbon dioxide emissions taking us where no human carbon footprint has gone before.

Apologies in advance, to the neighbors.