Last week we posted a critique of the Urban Institute's (UI) absurdly biased report that claimed Sen. Bernie Sanders' proposal for single-payer health reform would cause a massive increase in health spending. Now, the report's authors have issued a 12-page rejoinder to our criticism. But that response is riddled with distortions, misinterpretations and glaring factual errors. Moreover, they now make it clear that they didn't even try to estimate the costs of Sanders' (or our) single-payer proposals. Instead, they made up their own reform proposal and costed that out.

Our critique identified three main problems with the UI's projection that implementing single payer would boost total health spending by $519 billion in 2017. First, UI ignored about 75 percent of the administrative savings that single-payer reform would achieve. Second, it substantially underestimated single payer's savings on prescription drugs. And finally, it posited an absurdly large increase in the utilization of health care under single payer, far more than could possibly be provided by the current supply of doctors and hospitals.

Below, we briefly discuss the UI's response to those criticisms, and the facts of the matter.

1. Administrative savings, Part 1: The original UI report projected that single payer could cut insurance overhead from the current 9.5 percent of health spending ($341 billion) to 6 percent ($215 billion). As they now admit, they were modeling a compromised single-payer system, in which private managed care insurers like UnitedHealthcare would continue to play a major role, as they do in the Medicare Advantage program. (Neither we nor Sanders have suggested such a continued role for private insurers.) We pointed out that Canada's single-payer system runs for 1.8 percent overhead (a figure they impugn, but which is taken directly from Canada's official health statistics), and is similar to the overhead in the traditional Medicare program. Reducing our insurance overhead to the Canadian level would mean cutting it to "only" $65 billion. There's no reason to believe we can't be as efficient as Canada if we, like Canada, proscribe participation by private insurers.

The UI rejoinder argues that "it would be inadvisable to cut administrative costs so much that important functions could not be carried out effectively under a new system. Such functions include rate setting for many different providers of different types facing different costs across the country; quality control over care provision; development, review, and revision of regulations; oversight for fraudulent activity; provider oversight and enforcement of standards; bill payment to providers; consumer services; and more." Of course traditional Medicare (and Canada) are already doing all of those things, and the UI response gives no reason why $65 billion can't do the job.

2. Administrative savings, Part 2: The original UI estimate projected that single-payer reform wouldn't realize any savings on the vast amounts hospitals and doctors currently spend on billing and paperwork. Yet, Sanders' (and our) proposals would enormously simplify this billing and paperwork. We noted that reliable studies published in the most respected medical and policy journals have documented these provider administrative savings, and that numerous single-payer estimates by the Congressional Budget Office, the Government Accountability Office and private consultants have all assumed that these savings would occur.

In response, our UI colleagues continue to project zero administrative savings for providers, but say: "We agree that administrative costs would fall, but we do not agree they would be close to zero as HW [Himmelstein and Woolhandler] assert." Actually, we never asserted any such thing. We wrote that "U.S. hospitals spend one-quarter of their total budgets on billing and administration, more than twice as much as hospitals spend in single-payer systems like Canada's or Scotland's. Similarly, U.S. physicians, who must bill hundreds of different insurance plans with varying payment and coverage rules, spend two to three times as much as our Canadian colleagues on billing." Our estimate that cutting U.S. providers' administrative costs to Canadian levels would save about $2.57 trillion over 10 years was based on this well-established (and peer-reviewed) data.

3. Drug prices: The latest UI piece restated their conviction that a U.S. single-payer system could get only half the discounts that single-payer systems in other nations have gotten from drug companies (and would actually raise drug prices for patients currently on Medicaid). They continue to offer no reason why the discounts would be so small. Moreover, they now claim that Himmelstein and Woolhandler "argue incorrectly that we ignored savings from paying less for prescription drugs." In fact we didn't ignore their estimated savings, but said they should be two-fold higher than the 25 percent they projected.

4. Utilization of care, Part 1: The original UI report estimated that single-payer reform would cause a $519 billion increase in health spending in 2017, even accounting for some savings on administration and drugs. But we noted that there just aren't enough hospital beds or doctors to meet the huge surge in visits and hospitalizations they predict. To back up our claim we cited data from Canada (when its single-payer reform was implemented) and the U.S. (when Medicare and Medicaid were implemented). These data document that no, or very modest increases in society-wide use of care, occurred, and that instead care shifted from the rich and healthy to the sick and poor.

In response, the UI rejoinder says: "Contrary to HW's [Himmelstein and Woolhandler's] claim in their article, health care use and spending for the elderly population did increase substantially once the Medicare program was implemented in 1965." Here (as in their claim about our statement on providers' administrative costs) they have misquoted us. We wrote that "between 1964 (before Medicare) and 1966 (the year when Medicare was fully functioning) there was absolutely no increase in the total number of doctor visits," and that "the same thing happened in hospitals." While we are well aware that utilization by the elderly and the poor went up after Medicare and Medicaid were implemented, the point is that there was a compensatory, slight reduction in utilization by other Americans, reflecting the limitations imposed by the existing supply of hospital beds and doctors (most of whom were already working full time).

Here's the actual data on the number of doctor visits per person (not just the elderly) before and after Medicare/Medicaid:

And here's the actual data on the total number of hospitalizations: 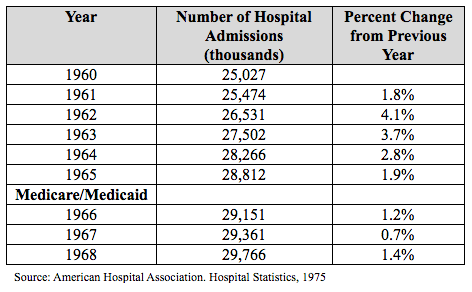 In sum, we were correct in stating that the overall utilization of care showed no surge.

5. Utilization of care, Part 2: We noted in our critique that the lack of a surge in overall utilization in Canada, or with the start-up of Medicare/Medicaid, reflected a shift of care, with the newly insured poor and sick patients getting more of the care they needed, and the healthy and wealthy getting less elective and unnecessary care.

The UI rejoinder disputes that such a shift could occur. "HW [Himmelstein and Woolhandler] indicate that use would increase for the newly insured but would decrease by a similar amount for those already covered as physicians cease unnecessary services for those otherwise covered and perform additional necessary care for those otherwise uninsured. This assumption is faulty for two major reasons. First, no uniform definition of what is necessary and unnecessary exists in medical care; if such a definition existed, insurers would stop paying for all unnecessary care under our current health system. Second, there is absolutely no reason to believe that higher-income, currently insured individuals would lower their use of care under provider supply constraints."

Their puzzlement displays a lack of familiarity with the considerable literature on variability in the utilization of care between different areas in the U.S., as well as the actual practice of medicine. John Wennberg and colleagues long ago observed that the number of surgical operations in a community showed only modest correlation with needs of the population, but was strongly correlated (r=.64) with the supply of surgeons.

As any doctor knows, doctors play a large role in regulating the amount of care they deliver. If we have no free appointment slots for the next month we're likely to put off seeing our healthy patients a bit longer. Gastroenterologists often perform unnecessary screening colonoscopies. That's not something many patients would demand. Indeed, the Aday paper referenced (to support a different point) in the UI rejoinder makes exactly our point: "After Medicare and Medicaid were introduced, providers may have begun to ration the number of visits by the 'well-to-do' to accommodate the influx of low-income patients with newly acquired purchasing power and a backlog of unmet need."

In sum, there's considerable evidence that doctor routinely adjust the utilization of care by their patients, and that when many additional people gain coverage, doctors shift care to this newly insured group, and compensate by reducing unneeded care for the wealthy and healthy.

6. What system was the UI analyzing? The UI researchers claimed to be estimating the budgetary impact of Sen. Sanders' proposal. Yet now they tell us, "To be politically acceptable, compromises would have to be made, and those compromises are reflected in our assumptions." In other words, their estimates are not actually based on the reform that Sanders (or we) have recommended. Instead they assume that the insurance and drug companies are too powerful to really rein in.

Overall, the UI response misrepresents key elements of our critique, and fails to address the erroneous assumptions that underlay their original analysis. Single-payer systems elsewhere provide more and better care at a lower price than we pay. The administrative bloat of our market-driven payment system accounts for much of the difference. While we recognize that a transition to a true single-payer system faces stiff political headwinds, it's medically and economically feasible. And as Sen. Sanders has shown, political climates can be changed.

Drs. Woolhandler and Himmelstein are internists in the South Bronx, professors at the City University of New York School of Public Health at Hunter College, and lecturers in medicine at Harvard Medical School. The opinions expressed do not necessarily reflect those institutions'.