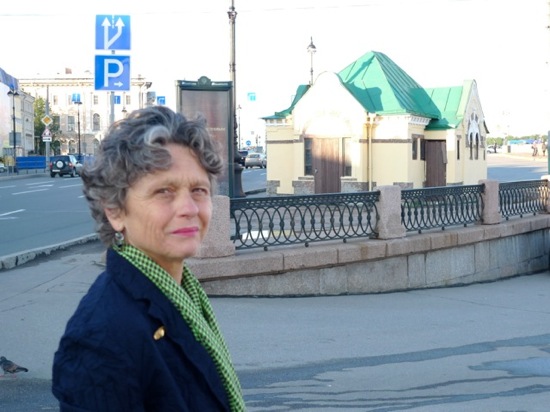 Stephanie Pincetl is director of the California Center for Sustainable Communities at UCLA. The Center studies the "urban metabolism" of Los Angeles and other cities. Jon Christensen, a journalist-in-residence at the Institute of the Environment and Sustainability at UCLA, talked with Dr. Pincetl about urban metabolism, nature in the city, and the challenges that Los Angeles and other cities face to become more sustainable in the 21st century.

Jon Christensen: You study "urban metabolism." What does that mean? And why do you study it?

Stephanie Pincetl: Urban metabolism is an analogy. It describes the city as a living thing that requires inputs to nourish its activities, and once the flows into the city are used and metabolized, the system produces waste, just like a living organism. I study urban metabolism because it quantifies the flows into cities and enables us to understand how those flows are used. We can map those flows over socio-demographic characteristics, climate, land uses, and building types and ages, and understand where those flows are used and by whom. This provides useful insights for policy makers and others to target energy efficiency and conservation programs. It also simply reveals how much stuff is needed to keep cities going at the present rate. Urban metabolism baselines can be established over time so we can measure change as well.

Jon Christensen: If cities are like organisms, what key challenges do we face to make Los Angeles and other cities sustainable living organisms?

Stephanie Pincetl: One of the first key challenges is that we have an infrastructure that was built during the carbon age. LA was built during an era of cheap fuel, cheap land, cheap resources, like wood, cement, and other building materials, all made possible by the nation's rich natural resource base and inexpensive, abundant energy. The future will not be the same, and changing our infrastructure to reduce our use of carbon fuels and materials takes time and money. The development of a complete public transit system, for example, is very expensive. But even more difficult are the other urban infrastructure changes that we will have to make to change the shape of the city to make it more sustainable. These include making profound changes in single-family neighborhoods - allowing more small apartment buildings, cafes and other commerce in these neighborhoods, adding in small parks, and changing streets to complete streets. To make Los Angeles and other cities sustainable we will also need more distributed infrastructure for water and energy, such as electricity produced by roof top photovoltaic panels, and small-scale water treatment plants that produce recycled water for neighborhoods. All of these represent long-term, major changes for how Los Angeles and other cities will look and work. And they can be implemented.

Jon Christensen: What are "complete streets"?

Stephanie Pincetl: Complete streets is a term that is used to describe streets that include bike lanes, bioswales that infiltrate stormwater into the ground instead of simply sending rain water out to sea through stormwater drains, trees to shade sidewalks to make for a more pleasant pedestrian experience. Complete streets acknowledge walking and biking as equal forms of transportation to the car, and take advantage of nature to improve environmental quality.

Jon Christensen: We live in an arid environment and climate change is going to affect our water supplies too. Will we have enough water for the city to thrive in the future?

Stephanie Pincetl: Los Angeles is moving in a very good direction with water. Water use has been trending down over the past decade. However, there are some basic problems that are hard to resolve. Water providers need revenue. And revenue is predicated on sales. Water providers can embrace water conservation and help the public use less water, by changing outdoor landscaping, for example. But the less water people use, the less revenue the providers have, and often they have to raise rates to make up the difference, which can make customers feel cheated because they are using less and paying more. This is a vicious cycle that we need to solve. The other major problem in LA is that there are over 100 different water providers across the region. Most are public but there are also private companies, mutual water companies, and then wholesalers and retailers. This is a very complex system that is not very transparent, which makes it hard to understand, and a major challenge for better coordinating water management and more efficient water use across the region. The other big challenge is building our capacity to reuse water. Previously used water is a huge resource that is, for the most part, being wasted right now. We can treat this water to high standards, so that it can be used for drinking water, or lower standards for irrigation or industrial processes. These challenges can seem daunting, but we can solve them to make Los Angeles, and other arid cities like LA, more sustainable.

Jon Christensen: What about energy? Can we make enough clean energy for the city to run on clean energy in the future?

Stephanie Pincetl: Energy should not be a problem. Combining distributed solar generation, renewable gas made from agricultural and municipal waste streams, conservation and efficiency, we will have ample energy supplies.

Jon Christensen: How do you think about nature in the city?

Stephanie Pincetl: Nature surrounds us everywhere in the city, we live in the midst of it all the time, but are not even aware of it. Buildings are made from concrete, made with aggregate and water. Roads are asphalt, from fossil fuel. The resources that we build with and make all our daily items with are sourced from nature. When we begin to be more aware of that, it helps us understand the fundamental materiality of cities and how much they are made from nature, far flung, perhaps, and remanufactured, but nature nonetheless. That kind of awareness can better inform our decisions about building materials, their energy intensivity -- or how much energy is embedded in the things we make -- and how the built environment is both the product of transformed nature and then transforms nature where we build.

UCLA Inst. of the Environment and Sustainability 224, Contributor

Our mission: research, education, public engagement on environment and sustainability in Los Angeles, California, and the world.