Urban Outfitters just loooooves getting into trouble. The latest controversial t-shirts hanging on the retailer's shelves have nothing to do with racism, politics or the Holocaust but rather underage drinking: a slew of pro-drinking tees have grown-ups in a tizzy.

Truly Madly Deeply's "Vote For Vodka" Muscle Tee and "USA Drinking Team" Tank Top are two of the items that caught Yahoo Shine's eyes. As Shine points out, the styles are presented on UrbanOutfitters.com on what appear to be teen models, which would make sense: Urban Outfitter's biggest demographic is 18-24 year-olds while the under-18 demo is its second. (We're dating ourselves here, but our high school wardrobes were chock full of Urban clothes.)

It's plain to see why parents might be upset. Jan Withers, national president of MADD (Mother's Against Drunk Driving), told Shine, "Kids shouldn't be wearing these t-shirts... Marketing [alcohol-related products] to teens is not in any way acceptable." Urban Outfitters isn't the first: Forever 21 came under fire in 2008 for selling cute tees with phrases like "beer is my anti-drug" and "save water, drink beer" and various beer company logos to its teen customers.

At this point, Urban Outfitters should have a strict script to dealing with these controversies. There were the "Navajo" panties that got them sued by the Navajo Nation; the yellow star tees that evoked the Holocaust; the St. Partick's Day tees that mocked Irish stereotypes of drinking; the "Ghettopoly" board game full of all sorts of racist stereotypes; the arguably pro-ana "Eat Less" t-shirts; the "Everybody Loves a Jewish Girl" tees covered in shopping bags and dollar signs... honestly, we could go on and on.

Not all of these controversies garnered the same amount of outrage, of course. But Urban Outfitters does know its way around a negative headline.

So far the "Vote for Vodka" and "USA Drinking Team" shirts are still available online; a third style, the "Drink Before U Think" Oversized Tee, appears to have been pulled down. Do you think Urban Outfitters should be selling these shirts, potentially to teen customers? 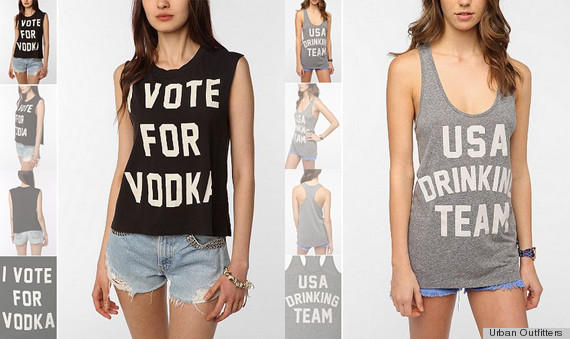