The history of humanity is a history of poverty. This is illustrated in the work of University of California, Davis economist Gregory Clark. According to Clark (Farewell to Alms: A Brief Economic History of the World): "While even before the Industrial Revolution, small elites had an opulent lifestyle, the average person in 1800 was no better off than his or her ancestors of the Paleolithic and Neolithic."

Over the past two centuries, standards of living have risen strongly and poverty has been reduced, especially in the more developed world. Cities are much of the difference, as they have attracted rural residents to the jobs made possible by technological and commercial advancements.

In 1800, less than 10 percent of the world's population lived in urban areas. In 2015, United Nations data indicates urbanization will reach nearly 55 percent. The connection between urbanization and affluence is illustrated by a 10 times increase in the world gross domestic product per capita between 1820 and 2010 (inflation adjusted, according to Angus Maddison project data). Yet, for most of the last two centuries, progress toward greater affluence and poverty reduction has been focused in more developed countries.

Today, even less developed nations are making great strides in the struggle against poverty. The World Bank uses per capita daily income of $1.25 or less to indicate extreme poverty (2005$, adjusted for purchasing power parity). In 1981, more than half of the less developed world's population -- approximately two billion people -- lived in extreme poverty. By 2011, this figure had been reduced to 17 percent, or just above one billion people (Figure 1). Today, 950 million fewer people live in extreme poverty than in 1981, a reduction equal to three times the total U.S. population. 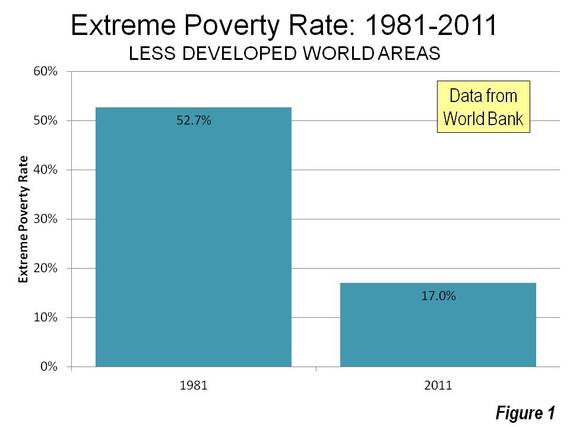 There were also substantial reductions in three other regions, where 1981 extreme poverty rates were much lower (the Middle East and North Africa, Latin America and the Caribbean, and Europe and Central Asia). 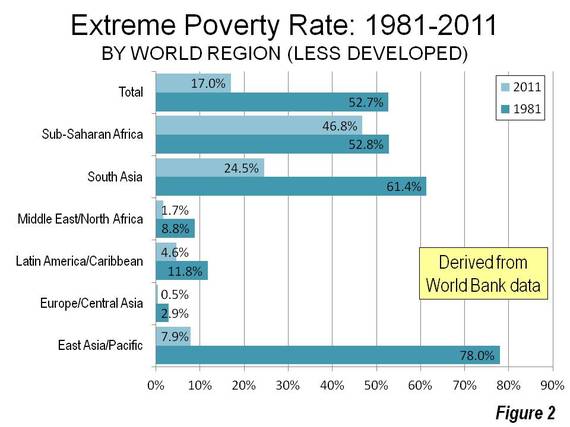 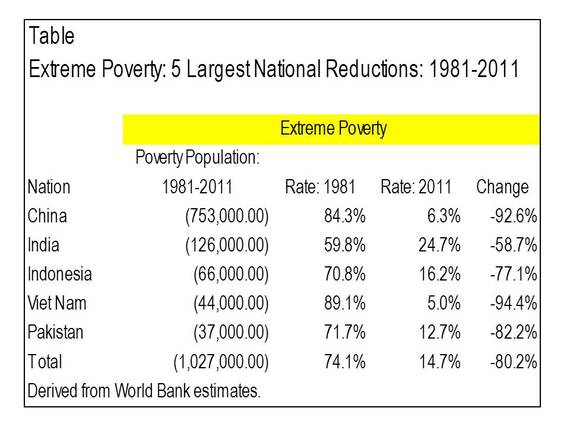 The United Nations forecasts further increases in world urbanization, especially in the less-developed world. Given the close connection between higher incomes and greater urbanization, extreme poverty rates should continue to decline. Continuing trade liberalization, typified most recently by the APEC Beijing agreement to study a Free Trade Area of the Asia-Pacific, could eventually lead to more job-creating investment in the less developed world. Clearly, much more progress is necessary. But nearly a billion fewer people in extreme poverty is a good start.