With golden sunshine blanketing the Kaiser Permanente Arena in downtown Santa Cruz on the California coast, the Santa Cruz Warriors took home their first ever NBA D-League championship last weekend, with a decisive 109-96 victory over the Fort Wayne Mad Ants.

They say the third time's a charm, and after a pair of unsuccessful trips to the championship series the previous two seasons, the Surf City cagers captured D-League gold by sweeping the best-of-three title series, and, by so doing, ushered in a decisively new era in Developmental League basketball.

An absolutely raucous capacity crowd--charged with the electric anticipation of history in the making--cheered on as the Warriors pressed the game in the second half, and much like their NBA counterparts, buried the Mad Ants behind a relentless team defense and a highly disciplined scoring machine modeled on the offensive sets of Golden State coach Steve Kerr. 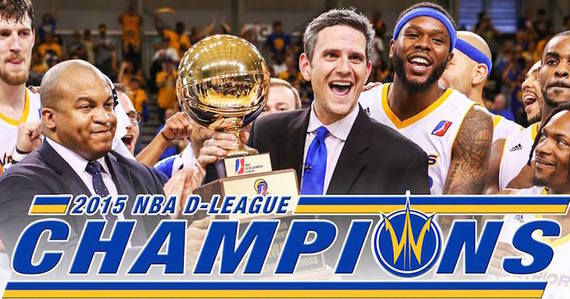 Three Warriors recorded more than 20 points--dynamic forward Darington Hobson; the slick shooting guard Elliot Williams; and assignment player James Michael McAdoo, currently on the Golden State roster--but it was the gritty performance of Taylor Griffin (brother of NBA star Blake Griffin) that symbolized the Warriors' championship performance: in one quick transaction, Griffin drained a three-pointer, then hustled back on defense to throttle a Mad Ants breakaway.

Later in the game, Hobson (who finished the game with 22 points and a team-high seven assists) initiated an electrifying five-point sequence with a dramatic three-pointer followed up only seconds later by Dominique Sutton's off-hand breakaway layup. The hometown crowd went crazy--and the Mad Ants were done.

The Warriors' talented head coach, 31-year-old Casey Hill, called the victory "unbelievable" and "a dream come true." With characteristic modesty, he heaped all the praise on his players. Hill noted the challenges of keeping a D-League team--with its serial personnel changes--focused throughout the season, in what are not always the best of conditions. "Where there's struggle, there's growth," he noted. "Every time there was a challenge this year, we grew. We were like tempered steel at the end. You couldn't break us."

It was, said Hill, his first championship at any level--and he intended to savor it.

The Warriors title caps a season in which the NBA's Development League caught hold in the greater public's imagination and established itself as a national brand. D-League president Malcolm Turner, who attended the final championship game in Santa Cruz, said that the D-League is looking to expand beyond its present 18-teams and establish new franchises in a pair of communities (seventeen NBA teams currently have exclusive affiliations with D-League teams; the remaining 13 are in a muddled partnership with the Mad Ants). In a recent interview, Turner identified Santa Cruz as a "model franchise" for such expansion.

Three years ago, on a cold February day in Oakland, Santa Cruz President Jim Weyermann (who also serves as Golden State's Vice President of New Franchise Development) met with Kirk Lacob (son of Warriors' owner and CEO Joe Lacob and, himself, now the Warriors' assistant general manager), and the decision was made to move the organization's minor league franchise from the outback of Bismarck, North Dakota, to the cozy seaside jewel of Santa Cruz, little more than an hour down the Highway 880 corridor from the big team.

The decision has paid off in droves: the Santa Cruz facility has become a "mini-Oracle," in the words of Weyermann, where the "Warriors brand is duplicated" at the D-League level and the "parts have become interchangeable."

In the quiet of his modest office in downtown Santa Cruz, the ever-enthusiastic Weyermann acknowledged that he was thrilled with the Warriors championship and equally ecstatic about the Warriors reception in the greater Santa Cruz community:

"This is the culmination of a dream," Weyermann noted. "And it's been an incredible journey. You know, we can say we have a great product, but, in the end, it's really not for us to 'say.' You have to demonstrate it. And the fans responded. The fans are the ones who've made a statement about the quality of our product. This is really great for them."

Ever since Jeremy Lin's sensational jump from the minor league Erie BayHawks to the New York Knicks in January of 2012, the NBA's D-League has exploded on the consciousness of American sports enthusiasts. Gina Antoniello, Director of Public and Community Relations for the Warriors, pointed out that ESPN televised the entire D-League post-season, with the finals in Santa Cruz being broadcast on ESPNU and ESPNEWS. Beginning in 2016-17, at least 20 regular season D-League games will be seen on ESPN networks.

Weyermann, who's one of the D-League's most ardent advocates, said he sees the league as heading toward "a Major League Baseball model" in terms of player development. This past season, 170 NBA players (a remarkable 38 percent of the league) had D-League experience, while there were a record 195 NBA player assignments during the 2014-2015 D-League campaign. 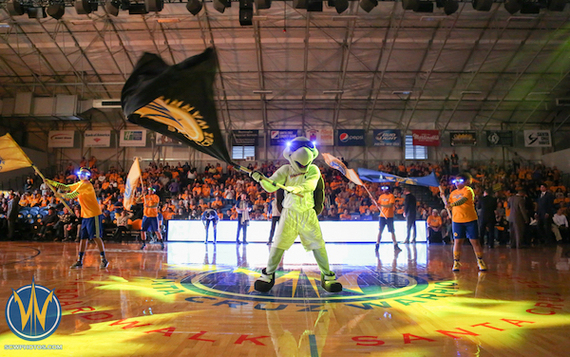 One big question for Santa Cruz next season is whether or not Hill--one of the most highly respected young coaches in the country--will find himself back at the Warriors helm or as an assistant on an NBA squad. "The plan is to be back next season," he noted. "These last two years have been the best years of my life. My dad [Hill's father Bob Hill was an NBA head coach for five different teams] gave me the best advice: do the job you've been given, focus on the task at hand, and opportunities will come." In the younger Hill's case, it's not a matter of if but when that opportunity will come his way.

There's also something of a question mark hovering over the Warriors long-term presence in Santa Cruz, as negotiations are in place with the city to find the Warriors a permanent facility for their beloved D-League franchise. A five-year contract between three parties--the Warriors, the city, and the Santa Cruz Seaside Company, which owns the property on which the "temporary" Kaiser Permanente Arena now resides--expires in 2017.

"The City is going to work hard to create a permanent arena to facilitate the Warriors remaining here," said Santa Cruz mayor Don Lane, who's been excited by the Warriors championship run and participated in the team's victory parade along Pacific Avenue this past week. "This will not, however, be a simple task--finding the best site, financing the construction of a permanent arena and finding the additional uses that will make it a viable operation are all real challenges. However, I'm optimistic that we can get there based on the excitement the Warriors have generated in this community."

Which is also a way of saying that it's not--excuse the metaphor--a slam dunk.

Weyermann is also cautiously optimistic about the future. "We would not have invested in the City of Santa Cruz, if we didn't want to be here," he noted. "The success here has validated all of our expectations. There's no better community than Santa Cruz. We're motivated to stay."

Geoffrey Dunn is the author of Sports of Santa Cruz County (Arcadia Press) and has won awards for sports writing from the National Newspaper Association and the California Newspaper Publishers Association. Photos courtesy Tim Cattera and the Santa Cruz Warriors. Hat tip to the Santa Cruz Sentinel's Andrew Matheson for superb Warriors coverage throughout the season.