In a stunning blow to mountaintop removal blasting operations in the Coal River Valley of West Virginia this morning, two fearless protesters scaled massive trees and unfurled banners from their 80-foot-high platforms. Within 300 feet of the Massey Energy's Edwight mountaintop removal blasting site, above Pettry Bottom and Peachtree in Raleigh County, West Virginia, the protesters called on federal agencies to crack down on the scandal-ridden West Virginia Department of Environmental Protection (WV DEP) and stop the unsafe and reckless blasting in the area.

As part of a growing coalfield uprising, this dauntless action has brought the gripping images and realities of the mountaintop removal nightmare in the Appalachian coalfields to the Beltway-bound offices of the EPA, the Council on Environmental Quality and the transitioning Office of Surface Mining.

Mired in scandal, the WV DEP has been the focus of a series of protests, complaints and growing internal dissent recently. Outraged coalfield residents and protesters even chained themselves to the DEP offices in Charleston, WV this month.

Last Friday, Charleston Gazette reporter Ken Ward broke the story on a blockbuster internal memo from a WV DEP biologist that criticized the agency head Randy Huffman for his gross oversight over "the long-lasting adverse impacts" of mountaintop removal mining that are "indeed significant."

As the 13th direct action in the coalfields this year, today's daring protest raises the stakes in the coalfield uprising, as residents called on federal regulators to respond to the failed state agency's lack of enforcement and its blatant circumvention of regulations, as millions pounds of ammonium nitrate/fuel oil explosives continue to blast every day in the lush mountain communities in West Virginia, Kentucky, Tennessee and southwestern Virginia. 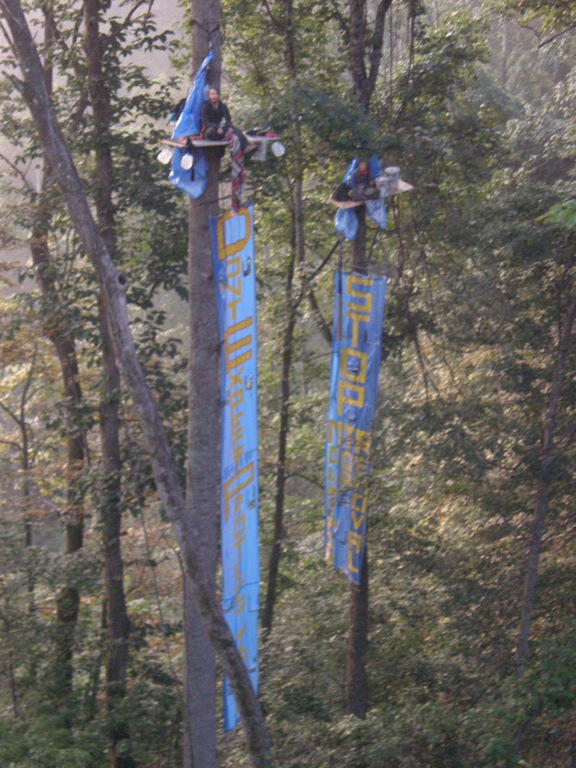 "I am sitting in this tree to halt the blasting that endangers the residents of Pettry Bottom and Clays Branch," protester Laura Steepleton said. "The people of Pettry Bottom, Clays Branch are living below a land slide waiting to happen and the only barrier between fallen trees, mud, boulders and water and the Pettry Bottom community is a wooden stake and tarp fence. The DEP needs to step in and protect its citizens -- not Massey Energy -- stop the blasting above Petty Bottom, and end mountaintop removal."

Associated with the Climate Ground Zero and Mountain Justice campaigns, the tree sitters say they will not willingly descend until blasting ceases above Pettry Bottom, Massey Energy pays the full cost of health care and home repair for Pettry Bottom and Peachtree residents, and the Federal Office of Surface Mining commits to supervising the full reclamation of the Edwight mine.

Here's a shot of what flyrock can do to a house in the blasting area: 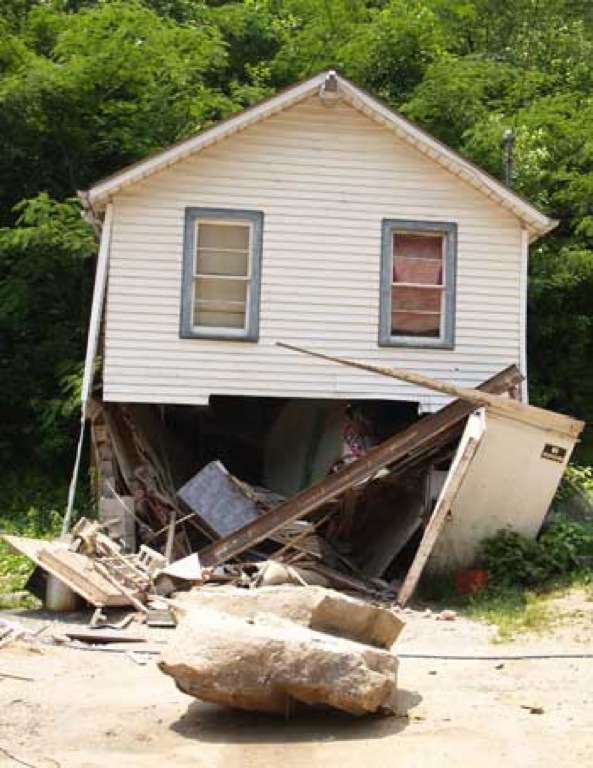 "As you know, the Obama administration recently announced a series of regulatory initiatives to "strengthen oversight and regulation, minimize adverse environmental consequences of mountaintop coal mining." While I have great admiration for President Barack Obama, energy advisor Carol Browner, and his new EPA administrator Lisa Jackson and CEQ chief Nancy Sutley, the reality is that their regulations can easily be avoided through loopholes.

While federal regulators were able to temporarily halt blasting above my home, I recently learned from the West Virginia Department of Environmental Protection that the green light has been given to renew the blasting closer to the coal seam, in an area that is even closer to our Clay's Branch homes. "

The rest of Webb's letter is here:
http://www.huffingtonpost.com/jeff-biggers/urgent-july-4th-declarati_b_224864.html

Here's a video of the blasting near Clay's Branch and its shower of flyrock, silica dust and heavy metals on area residents:

As the top source of information in the coalfields, Ken Ward's Coal Tattoo's blog has been packed with WVDEP news lately, including a recent OSM report that scolded the embarrassing state agency's lackluster enforcement of blasting and flyrock regulations:

Here's an example from the report: The OSM found:

"Due to the significant danger of flyrock, it is recommended that in all cases, OEB institute the cessation of blasting activity in the area where flyrock originates and adjacent areas until an investigation is completed an prescribed changes are implemented by the company to ensure there is a reasonable expectation that flyrock will not occur again from the same cause."

WVDEP's response to that recommendation?

"OEB does not feel it is necessary to issue an [imminent harm cessation order] or cease blasting on all flyrock cases. It is the inspector's call as to whether or not the individual incident warrants an IHCO. However, OEB will take multiple incidents into consideration in determining if blasting should cease."

"We know have clear evidence that in some streams that drain mountaintop coal quarry valley fills, the entire order Ephemeroptera (mayflies) has been extirpated, not just certain genera of this order. We also have evidence that some streams no longer support the order Plecoptera (stoneflies). Some genera of stoneflies are particularly sensitive to high total dissolved solids just as some mayfly genera are.

So, in streams below valley fills where stoneflies have survived, that order's diversity has been diminished. There are other genera and species of other orders of benthic macroinvertegrates that have been negatively impacted by streams draining mountaintop coal quarries, not just a few "genus" [sic] {Note -- the "sic" is Woods correcting Huffman's choice of words} of mayflies.

For updates on today's action, go to:
http://climategroundzero.net/

Here's a video of today's action: