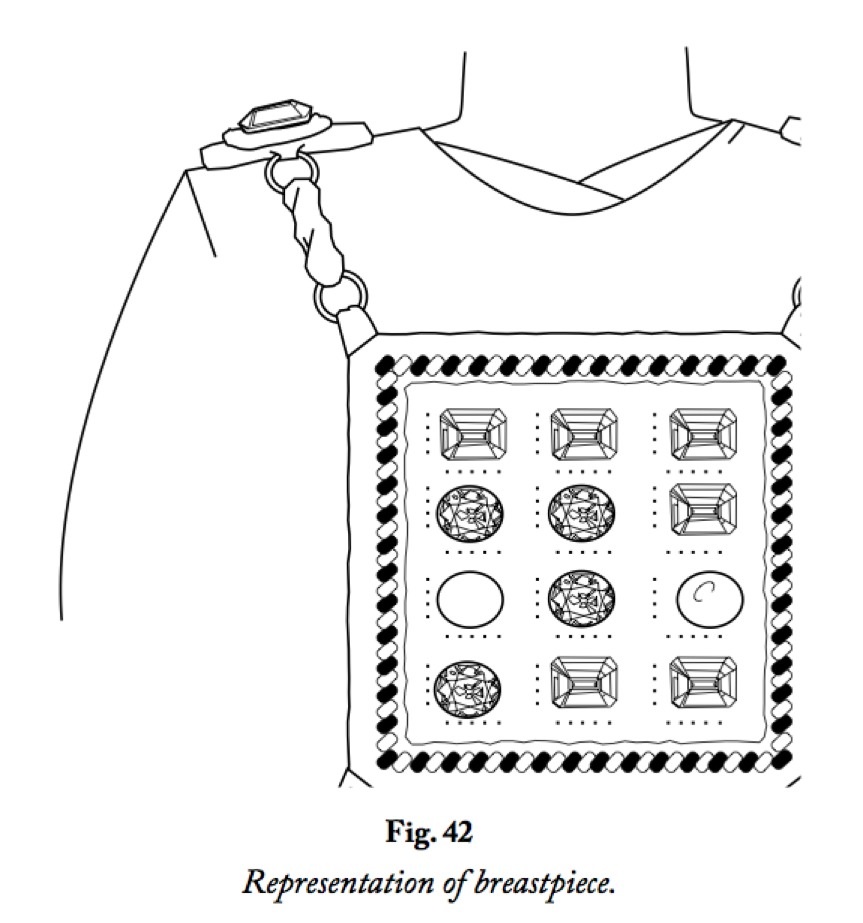 In biblical times there was a peculiar apparatus that the Israelite High Priest wore. It consisted of a robe to which was attached an apron-like garment called an ephod. Fastened on the ephod was a breast-piece which contained twelve precious and semiprecious stones and two more at the shoulders, abnay zeekawrone in Hebrew. In a pocket of the breast-piece were two items called urim and thummim.

The first two mentions, Exodus 28:30 and Leviticus 8:8, are simply directions to put the two objects into the breast-piece. As we go through the references, note the recurring theme of talking with God.

"And you will put in the breast-piece of judgment the urim and thummim, and they will be on Aaron's breast when he goes in before the Lord; and Aaron will carry the judgment of the Israelites on his heart before the Lord continually." (Exodus 28:30)

In the third reference, the Bible says that when the Lord told Moses to appoint Joshua as his successor, He said, "And before Eleazer the priest he [Joshua] will stand and he will ask of him after the judgment of urim before the Lord." (Numbers 27:21) Again, notice communication with the Lord.

Finally, when Moses blessed each of the tribes before he died, he said of the tribe of Levi, "Your thummim and your urim (be) with your pious one." (Deuteronomy 33:8) While there are several ways to interpret the passage, the gist is simply the hope that the urim and thummim should remain in responsible hands.

That's it for the urim and thummim in the Five Books. Not until 1 Samuel 28:6 are they mentioned again. There Saul, the first king of Israel, tried to communicate with the Lord after disobeying Him. "And Saul inquired of the Lord, but the Lord did not answer him, neither by dreams, nor by urim, nor by the prophets." The only other references are identical ones in Ezra 2:63 and Nehemiah 7:65, which shed no light on their use or characteristics.

Let's go to the original Hebrew abnay zeekawrone for a moment. Zeekawrone comes from the verb zawchar, meaning "to remember," which is why most translators use "stones of memorial" to translate urim and thummim. However, zeekawrone also significantly means "to mention." (There's the communication theme again.) Genesis 40:14 uses both meanings in Joseph's statement to Pharaoh's chief cupbearer: "If you remember (z'chartanee) me ... mention (v'heez'kartanee) me ... to Pharaoh." In Exodus 23:13 the Lord commanded, "The name of other gods you will not mention (tazkeerroo); it will not be heard out of your mouth."

Flavius Josephus, the Jewish historian-soldier (38-100 CE), described the ephod with its urim and thummim as communicating by having its stones light up in a sequence to answer questions to it. (Josephus, Antiquities of the Jews, book 3, chapter 8, section 9) Whether or not Josephus was right about the system, the question arises: What does that have to do with "stones of memorial" as they are traditionally translated?

Due to the sparseness of these scriptural references, it is difficult to get at the derivation of urim and thummim. There have, however, been many attempts. For example, The Jewish Encyclopedia says that they are probably adaptations of the words urtu, meaning "command, order, decision," and tamitu, meaning "oracle," found in the Babylonian Tablets of Destiny as items that rest on the breast of a god. (Jewish Encyclopedia, vol. 12, 385) Another popular translation is "lights and perfections." The concept of light is from the Hebrew word oor, meaning "fire" or "light," oorim simply being the plural. In Ugaritic, ar means "light" and ur means "heat." Urru is the same word in Assyrian and perhaps even ra, meaning both "sun" and the sun god of Egypt. Thummim is related to a group of words, including tawm, tome, and tawmim, all of which are said to derive from the root tmm. The general meaning of these words is "finish, make an end, perfect" or "to complete something." Similarly, the Ugaritic tm means "entire, whole, completion," and the same tm in the Egyptian means "complete, entire." (Ugaritic: Driver, Canaanite Myths and Legends, 153. Egyptian: Faulkner, Dictionary of Middle Egyptian. Also see Koehler and Baumgartner, et. al., Hebrew and Aramaic Lexicon, 1742-50.)

Similar words in ancient Assyrian and Babylonian bear out the communicative notion. There the primary meaning of the word zakaru (long noted as a relative of Hebrew) rests in the idea of communication. In the Chicago Assyrian Dictionary there are six basic meanings: (Gelb, Landsberger, and Oppenheim, eds., Chicago Assyrian Dictionary, vol.21, 16-22, from Old Akkadian, Old Babylonian on)
1. "to declare," as in "to declare under oath," "to make mention"
2. "to invoke," as in to invoke "the name of a deity" or "to name, as king"
3. "to speak"
4. "to name, proclaim"
5. "to mention, to invoke, to name"
6. "to take an oath"

I could also demonstrate that there are Egyptian words with similar meanings, and in Talking With God I do. Here I will just say that the prevalent speak/communicate meaning of similar sounding words in these ancient languages persuades me that zawchar is a very ancient concept. I make that point because understanding of the original meanings of words became unclear or forgotten over time leading to the traditional translations we know today. Case in point: The age of the similar foreign words indicates that, instead of abnay zeekawrone meaning "stones of memorial," it could have originally meant "stones of communication/mention." The modern translation, "stones of memorial," has clouded modern understanding of the purpose of the stones though it was perfectly clear at the time they were in use. The persistent legends and ancient histories regarding the stones' oracular nature suddenly take on a more logical meaning.

Here's my take: The Bible is indicating that the priest wore the ephod as a sort of portable walkie-talkie for communicating with the Lord when they were away from the main communication device, the ark of the testimony. The urim and thummim, deriving from the ideas of light and completion respectively, were the on and off switches. The urim would turn on the stones in the ephod to communicate by signal, and the thummim would turn them off when communication was finished.

To learn more about Talking With God: The Radioactive Ark of the Testimony. Communication Through It. Protection From It. by Roger D. Isaacs, order your copy at TalkingWithGod.net.