As a "male of a certain age", I have what are politely called prostate problems: more bluntly, urination situations. When the need arises, I have little warning; the time to go is now.

When I first understood what was happening to me, I was terrified. In the past I could wait all day between trips to the restroom -- what if I now had to use the facilities every 45 minutes? Would I spend the rest of my life chained to bathroom needs?

In supermarkets, I started taking sidelong glances at the adult diaper section.

Fortunately, medication (and a daily glass of pomegranate juice) brought the problem under control. If the situation gets too bad, there is an effective surgery available.

But for seven million women -- in California alone -- the inability to hold one's water is a far more serious problem.

Urinary Incontinence (UI) is a major reason elderly women are institutionalized. According to a study by the International Journal of Geriatric Psychiatry, "The most frequent caregiver complaint at the time of institutionalization was incontinence..."

Families are overwhelmed by the constant and chronic bathroom accidents.

Physical danger is involved: the rush to get to the bathroom is a major reason for falls, especially at night. As an elderly woman's bones become fragile, a sudden fall can shatter a leg, or a pelvis.

Why does Urinary Incontinence hit women roughly twice as often as it does men?

The problem is huge. More diapers are sold for adult incontinence than for babies' use.

If one person goes through 3-5 diapers a day, think of the sheer trash-disposal problems -- diaper mountains for the landfills.

Nationally, the cost of incontinence exceeds $20 billion a year -- more than the expense of breast cancer, and comparable to the cost of chronic diseases such as Alzheimer's disease or arthritis.

Emotional depression from incontinence can be agonizing. When will leakages happen? Will others smell it? Some fear to leave the home; others may be too embarrassed to seek medical care. Isolation, loneliness, and depression can take over a person's life.

Surgery may help. But even when it does work, the relief is often only temporary, since leakage may re-appear as women age.

Two women scientists -- and the California stem cell program -- are challenging the problem. 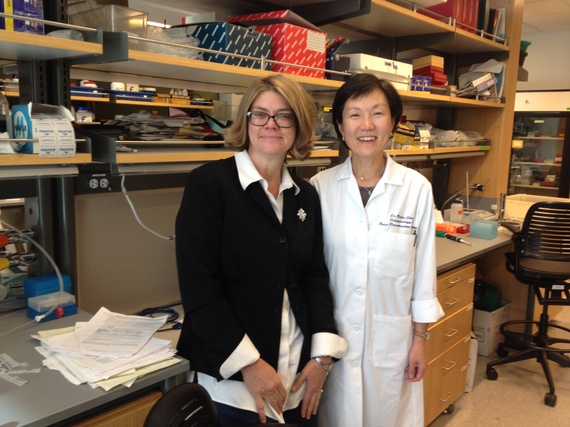 Stem cell researcher Renee Reijo-Pera and uro-gynecologist Bertha Chen are working together on a research grant from the California stem cell program. The California Institute for Regenerative Medicine (CIRM) sprang from the citizen's initiative Proposition 71, and the wisdom of the California voters.

Bertha Chen, by the way, was the gynecologist for the famous gorilla Koko, of sign language fame.

"We were trying to figure out why she was not getting pregnant; turns out the problem was with the male, not her," said Dr. Chen.

The doctor and the scientist will combine their skills to ease a personal tragedy which affects millions of women, world-wide.

First, the problem: a healthy sphincter, the muscular valve of the urinary tract, stays closed because of quietly-operating smooth muscles; these keep the urine in during our daily activities. But as the muscle cells age, they weaken, and some die; if there are not enough active cells to maintain closure, the urine may spill out during activity, even a simple cough. Childbirth may over-stretch the opening, with damage to the cells. If the opening cannot close securely, the person will wet themselves, perhaps continually.

One way to diminish the problem is "bulking." Injections of fat, collagen, or ground-up bone into the sphincter will narrow the opening.

But while this lessens the leakage, it does not bring control. Further, it requires repeated injections, perhaps annually.

Other surgeries may enhance the strength of the woman's internal ligaments. But these decrease in effectiveness when they have to be repeated, as they often do.

But what if young and healthy muscle could be regrown inside the woman suffering from urinary leakage? The normal method of controlling oneself would be restored, and the problem would be gone.

The Pera-Chen technique would inject muscle cells grown from the woman's stem cells into the urethral sphincter. There, it is hoped, younger and healthier muscles would restore function.

If successful, the technique might well be useful for other conditions, including: "diseases of the blood vessels, respiratory tract (e.g., asthma), digestive system (e.g. gastric reflux, fecal incontinence) and others, with potential applications for secondary conditions relating to diabetes, neuro-degenerative disorders and other common health problems."

The cells would be delivered in a way that is "minimally-invasive", without the risks of surgery. This delivery method is "very familiar to physicians" because it is "currently used for injection of bulking materials to treat Urinary Incontinence."

Where will the cells come from? The patients themselves.

Remember last year's Nobel Prize winner, Shinya Yamanaka, who developed stem cells very much like human embryonic stem cells (hESCs)? His method is called induced Pluripotent Stem Cells (iPSCs) which are made from the patient's skin. These cells would be used, with a possible back-up from the standard hESCs.

Hopefully, since the Yamanaka-type cells are of the patient's own body, there would be little or no problem of rejection.

And the hoped-for outcome?

"Our research overcomes major limitations to provide a ready stem cell-derived target product that we anticipate will provide a safe and effective treatment of Urinary Incontinence resulting in improved quality of life for a significant fraction of our population." -- Bertha Chen and Renee Reijo-Pera