According to Local 10, a Delray Beach man recently posted an ad selling "100 percent clean" urine for $20 per ounce.

"Need to take a drug test?" the ad asks.

The man, who called himself Dustin, successfully sold some of his urine -- produced on the spot at his apartment in a sober house for recovering addicts -- to a Local 10 producer he allegedly coached to pass a test while on hidden camera.

Go to Local10.com to see what happens when Dustin is confronted by a reporter.

This isn't the first time South Floridians have used the free online classifieds site to sell or request just about any bizarre service or item. Perhaps one of the weirdest recent local Craigslist ads offered is used socks.

"We basically wear the socks for a few days and get them really sweaty," Craigslist user 3956260718 explained to the Broward Palm Beach New Times. "This makes money."

If you think that's bizarre, check out the craziest Craigslist ads of all time below. 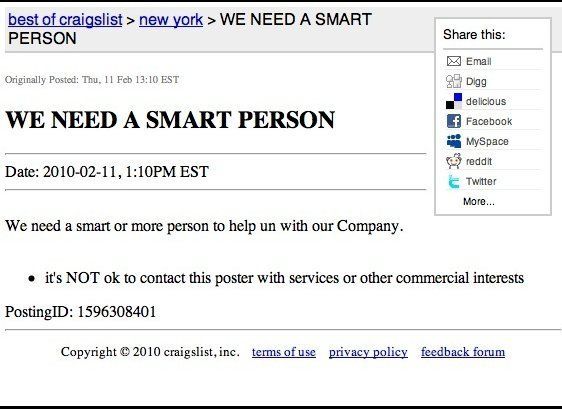