As you may have heard, Albert Rizzi, of Bellport, New York, and his seeing eye dog Doxology were kicked off a US Airways flight from Philadelphia to Long Island on November 13 when Rizzi was unable to, "shove his service dog under the seat," according to a Facebook post from fellow passenger Frank Olhorst, who was also ejected from the plane for objecting to the treatment of Rizzi. Olhorst's Facebook post, which predictably scooped the local news story by an hour, stated the following:

"so, here is the story - I was on usair flight 4384 from philly to islip - we had a disabled passenger on the plane with a service dog - we spend an hour on the tarmac waiting to take off - flight attendant tells guy he must shove his dog under the seat for take-off - he can't do it, flight attendant freaks out - we go back to gate they remove blind guy and dog from flight - all passengers are up in arms about this happening - so they basically throw us all off the plane - now sitting in philly wondering how to get home."

In the NBCPhiladelphia story the airline stood by the decisions of its crew, but has since buried its head in the sand in regards to what people are saying about the brand in social media channels and in engaging them with some sort of response. It's the dreaded Ostrich strategy!

The local news crew was kind in its objective portrayal of the event, in comparison with Olhorst's post and its growing, angry comment section. Twitter is amiss about the incident, but @USAirways is disturbingly silent. One look at its Twitter feed reveals that the airline's social media manager Tweets incessantly on a daily basis, with about 25% of those Tweets addressing customer complaints, so the lack of response to this issue kills the brand's authenticity.

A review of the brand's Facebook page reveals even more disturbing results than what is happening on Twitter. Since first being posted by a fan on the evening of the 13th, hundreds of fans have posted on the thread condemning the airline. Yet, the airline has failed to respond, where prior to this incident it was posting content and responding to customers regularly. Again, brand authenticity destroyed. 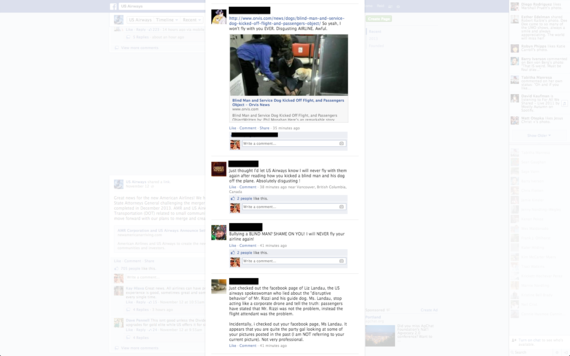 I hope I'm asking this question on behalf of the majority of my peers, but which school of thought produced the Ostrich strategy in regards to responding to customer service, and ultimately, public relations issues? Brands sometimes make ugly mistakes and in today's world those mistakes are magnified in social media channels. And rather than address these situations with a strategy that involves resolution with the public at large, especially when it involves kicking a blind man off of an aircraft and then refusing to refund his ticket, brands like US Airways respond by immediately putting their head's in the sand and hoping the storm will blow over.

It often won't, as is evident in this case with the story now hitting the international news cycle. The initial act of kicking Rizzi off the plane was bad enough, but the lack of any response from US Airways to the resulting social media storm making it much worse. @USAirways is probably too late to save its face (missed that key 24-hour deadline), but regardless should start communicating. There's a simple strategy involved, but then that strategy requires acknowledgement and customer empathy, and based on the company's standard responses to the many complaints lobbed against it in social media channels prior to this particular #FAIL, US Airways seems to have little of either.