Recently I visited San Antonio, Texas for the first time. I even went to the Alamo. My taxi driver from the airport, a middle-aged fellow from Cyprus, warned me against it. He ranks the Alamo as the most disappointing tourist site in America and considers the historic standoff that took place there completely implausible. In his estimation the old mission building -- where Davy Crockett and the other defenders fought and died in early 1836 -- is too structurally slight to have withstood a 13 day siege.

Let's just say the grandeur of Texas history was lost on this man. But as someone who studies America's wars past and present, I considered the Alamo a necessary stop. To see the site of the most famous military engagement in Texas history, I hoped would teach me an intangible something about stoicism, sacrifice, and America's military past.

What I did not expect was to receive a lesson about America's very modern military excesses while strolling through the posh lobby of the Grand Hyatt -- the newest, nicest, tallest hotel in downtown San Antonio.

I was in town for the American Studies Association's annual conference at the convention center adjacent to the Grand Hyatt. Among the gathered academics, there was a lot of talk about paradigms and paradoxes and also a fair amount of grousing about hotels. (One weary woman had shivered into the wee hours of the morning at the hotel she had found on Priceline.com, a $69 a night "bargain.")

But frigid and frayed hotels are part of the deal. By and large, we academics do not expect glitz -- more like Motel 6. Throw in free coffee and cable, and we are content. Or at least we are content to dwell on our discontentment. The American Studies Association's convention theme this year was "Crisis, Chains, and Change: American Studies for the Twenty-first Century," and that just about says it all.

Still and all, I had thought we might have it better than the US Army, which is why I did a double-take when I saw the first of the Army men standing with ramrod posture at the reception desk of the Grand Hyatt. There is something attention grabbing about the sight of men in camouflage in a marble lobby, especially when they are checking in to a five star hotel. A few delicate inquiries revealed that US Army recruiters were arriving in force for a weekend training conference.

Now maybe, once we passed the $1 trillion mark on spending for our wars in Iraq and Afghanistan, there was a tacit understanding among the powers that be not to sweat the small stuff. What are tens of thousands of dollars, even tens of millions, when you are counting in billions? And I can imagine that Army recruiters cannot have an easy time of it finding volunteers for deployment to Afghanistan, our longest-ever war. But putting Army recruiters up for a couple of nights at the Grand Hyatt, where rooms generally go for upwards of $175 a pop? Don't we have forts and barracks for that? 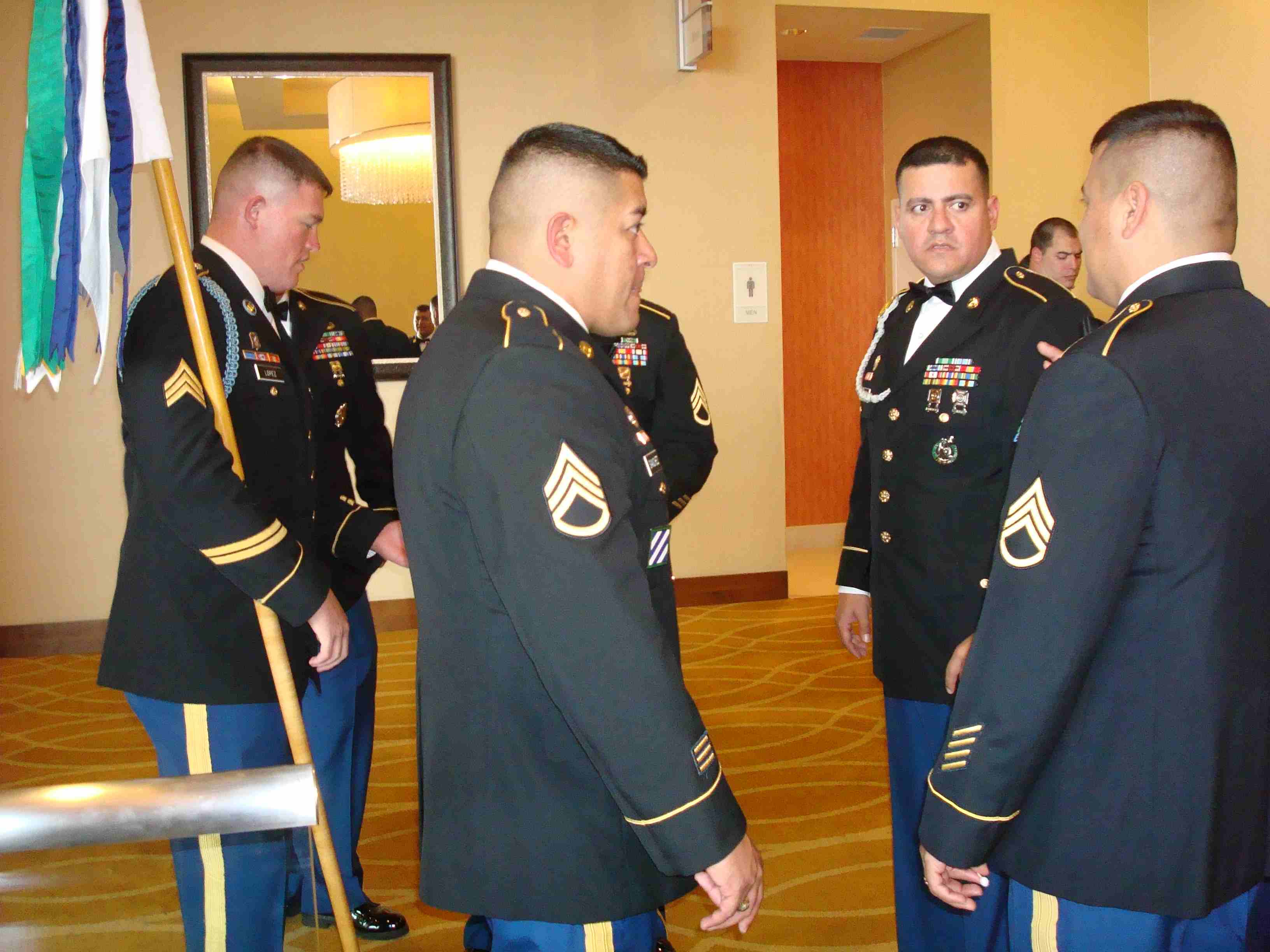 Saturday late afternoon rolled round and the Army men appeared in the hotel's lobby spiffed up in their navy blue dress uniforms, neat rows of military stripes emblazoning their broad chests. Their wives and girlfriends appeared by their sides in strapless gowns and form-fitting dresses. (I overheard one pregnant woman asking a man if he noticed her breasts were getting bigger. But that, I suppose, is beside the point.) I consulted the Hyatt's daily activities screen, and there I saw:

So this is what it has come to. We are we throwing banquets for our Army recruiters in luxury hotels, while the rest of America soldiers on. 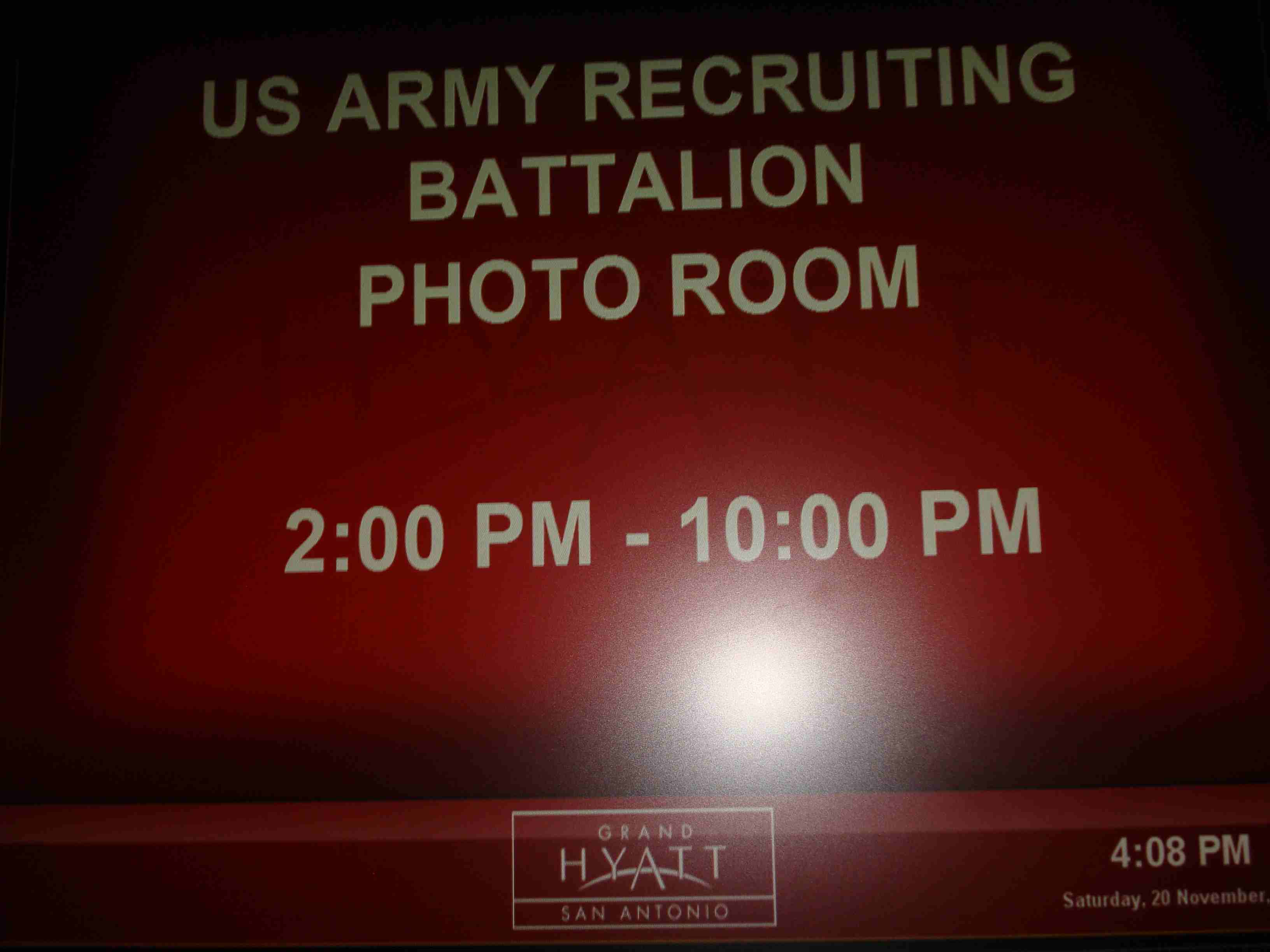 I left the Grand Hyatt and walked straight to the Alamo. It was almost closing time, and I stepped inside as pink clouds filled the sky. 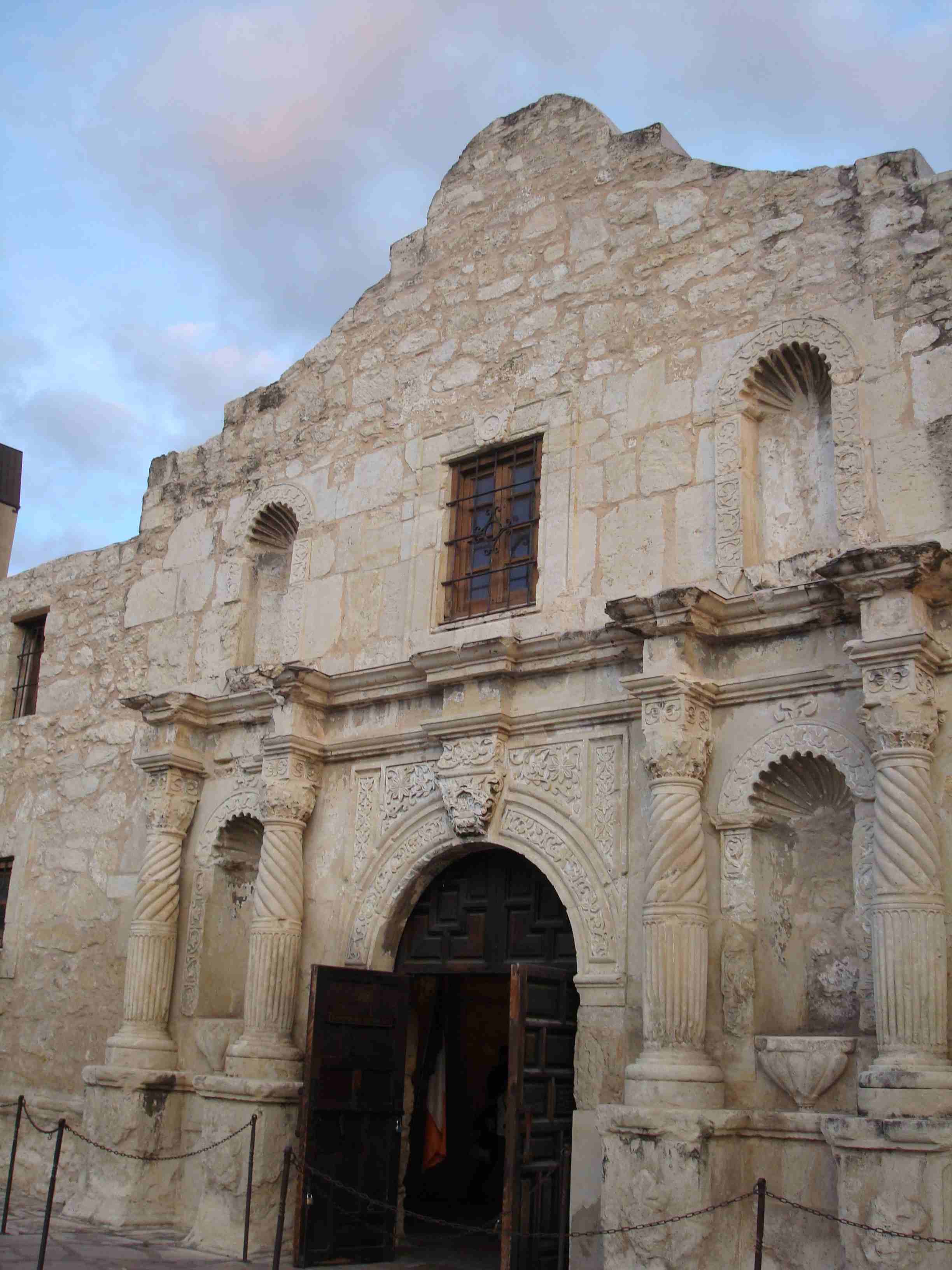 My Cyprian cab driver was not altogether wrong. The Alamo is not America's most evocative battle site. (Call me a purist, but isn't there something distasteful about having a big bank of soda and snack machines inside the walled compound where hundreds died? Can't tourists wait for their sugar-fix until they reach the Haagen Dazs next door?)

Of the following, though, I am certain. The men that fought and died at the Alamo were not enjoying "world class catering" or dancing the night away. And they definitely were not posing for group pictures in the Davy Crockett Event Room.

Cynthia Wachtell is the author of War No More: The Antiwar Impulse in American Literature, 1861-1914 (www.warnomorethebook.com) and a research associate professor of American Studies at Yeshiva University.