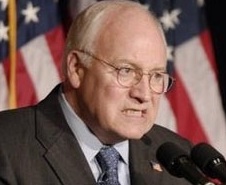 WASHINGTON - The United States has begun a massive effort to find something positive to say about Dick Cheney, the first vice president it has become impossible to talk about without swearing since Aaron Burr.

"It's not easy finding something pleasant to say about this douche bag, I mean, V.P.," said one official, "although if it IS there to be found, I'm sure we will find it. That is, if the bald prick didn't conceal THAT from Congress, too."

"The problem," continued the official, "is that the only way to admire Cheney publicly now is in an ironic, sarcastic way, like 'I love how he side-stepped the entire legislative branch' or 'You gotta love a guy who not only spearheaded warrantless wiretaps, but was so secretive about it he actually hurt counterterrorism surveillance."

Republicans who have publicly been calling the attacks on Cheney a "witch hunt" say that privately all they can say are things like "He looks good in a suit" and "At least he didn't shoot his elderly hunting buddy's entire face off."

President Obama has so far not said anything nice about Cheney, but neither has he indicated a willingness to hold him accountable. Some say that an investigation would undercut national security and give comfort to our enemies, which, according to Cheney, would include the American people and the U.S. Congress.

In lieu of an investigation, officials are considering commemorating Cheney's vice presidency with an all-star memorial, to be broadcast on five networks and feature video clips of water boarding, sleep deprivation, e-mail mining, iPhone tapping and face shooting. Fans could Twitter their favorite Cheney security violations.

This would be followed by Cheney himself appearing on Larry King, who, it was noted, can find something good to say about anyone. "He'll say something like, 'You have a gay daughter, whatever happened to that Boy George?'" said the official. "It'll be fine."